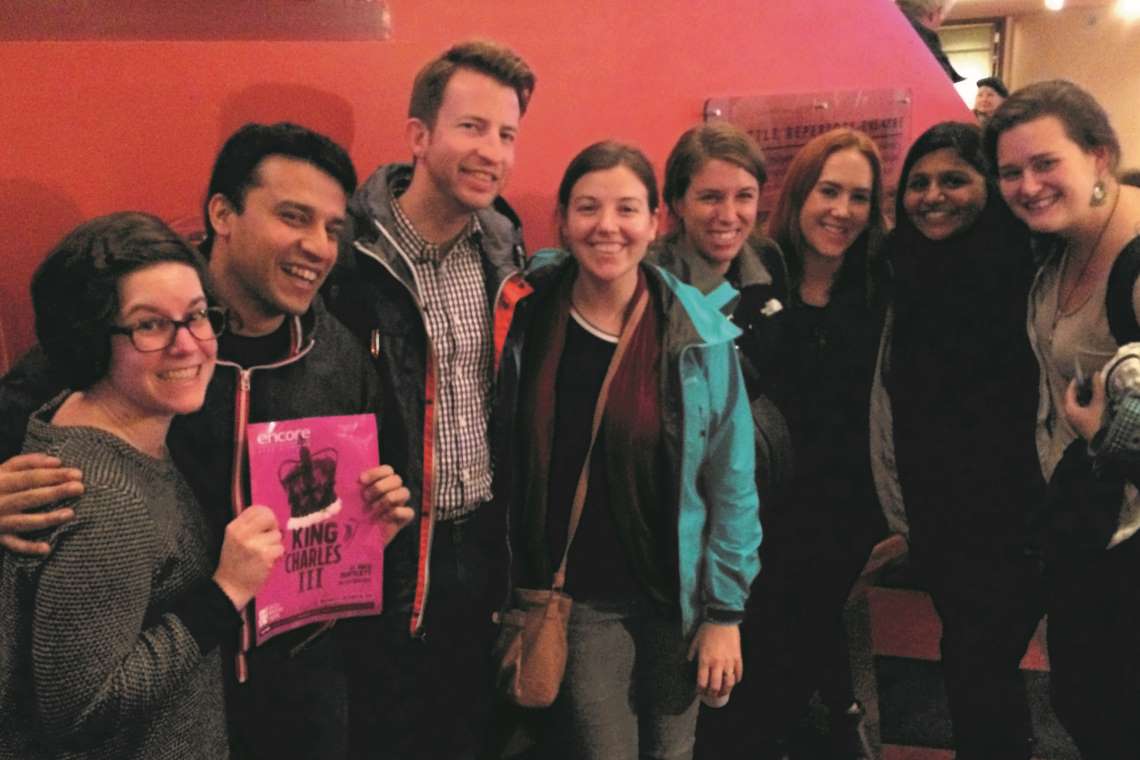 Everybody wants to see the King. Mohlman and friends at ‘King Charles III.’ Courtesy of author

For playwright Danielle Mohlman, pay-what-you will performances are a great way to convince new-to-theatre friends to take a chance on something new.

One by one, my friends hugged me as I handed them their tickets. “I’m so excited,” they exclaimed, a group of giddy Millennials huddled in Seattle Repertory Theatre’s lobby. It was November 2016, and we were seeing King Charles III.

During the performance, our group was responsive and engaged. We leaned forward, afraid to miss a single word, and as soon as the lights came up for intermission, we burst into conversation: the play reminded someone of the regime in Thailand, someone had a question about the ghost, someone else wondered about accents, and we were all thinking about our own country’s political climate. We chattered through every minute of intermission, and fell silently rapt again at the start of the second act.

For the 20- and 30-somethings I brought to the theatre—a group of tech product managers, marketing professionals, auditors, and MBA students—this performance was an exciting treat. You would never guess that a year ago, many of them were completely unaware of Seattle Repertory Theatre, or theatre in Seattle at all.

My partner and I moved to Seattle in 2015 because he was starting the MBA program at the University of Washington’s Foster School of Business. Most of the people I met that first year were affiliated with his program in one way or another, and, as a playwright surrounded by MBA students, I felt like the artistic misfit. When it came to seeing theatre, my new friends had no idea where to start.

I decided to enlist myself as theatrical chaperone, inviting folks to see shows with the promise I’d be there to guide them through the way to see a play. I knew ticket prices would be a barrier—why pay for something unknown and outside your home when Netflix is familiar and as good as free?—so pay-what-you-can performances would be the way to go.

After marking pay-what-you-can performances in my calendar, I emailed every person who ever said, “You write plays? So how does that work?” and invited them to join me for upcoming performances at Seattle Rep. Two joined me for Come from Away, then three joined me for Luna Gale. Enthusiasm about my theatre chaperoning spread and before I knew it, I was taking seven people to see King Charles III, complete with dinner before and fervent bus ride discussion on the way home.

Each of the people I have brought to the theatre has a different experience. Over the past two years, I’ve learned a lot about how to make new theatre-goers feel comfortable enough to be adventurous.

Before moving to Seattle for his MBA, Deepanjan Dey was a theatre actor in India, so I was surprised to learn that Seattle theatre felt inaccessible to him before he started seeing plays with our group.

“I think this speaks to a more generic problem I’ve observed in the United States about younger audiences staying away from the theatre,” he explained. “With so many instant and newer forms of entertainment available, theatre is perceived as more niche and ‘reserved for the artsy types.’ It’s different in India. There, young professionals enjoy going to the theatre and popular television and movie actors regularly perform onstage.”

One of our most memorable times at the theatre was seeing a preview performance of Luna Gale together. “There we were—enjoying quite a riveting show—when a set piece jammed as it came on stage. Having been an actor living in the perennial fear that something will go wrong technically, I was absolutely horrified at this situation,” Deepanjan explained.

It turns out that preview performances are a far less common practice in India than they are here. I remember Deepanjan on my right, worrying on behalf of the cast and crew fixing the technical issue, while our friend Jennifer, bewildered on my left, marveled at the sheer number of people that sprang into action from off-stage to remedy the situation. Both were surprised to learn that bumps in the road are a common and important part of previews.

When you boot up Netflix, you’re expecting a polished product. If you didn’t know any better, why would you expect anything less from your theatre? In the months since that Luna Gale preview, I’ve thought a lot about preview performances and how little care we theatre artists put into educating audience members about this essential part of the process, a part of the process in which we need audiences to take part. How else can we let untrained audiences in on the process of making a play?

I befriended Melissa Herrett when she first moved to Seattle in 2016, and I quickly recruited her to join my quickly-growing circle of play-seeing friends. On one of our first excursions, we took a chance on a pay-what-you-can performance of The Royale at ACT.

“It was so nice to pay a small amount to see a play I wasn’t familiar with, and I ended up really enjoying it,” Melissa said, reflecting on that first outing. “And it was great seeing it with you since we were able to talk about it after the fact. It was nice to have someone there to debrief with, especially someone knowledgeable about plays and theatre.”

I wasn’t an expert on The Royale. Though Marco Ramirez’s play about early 20th century boxing has enjoyed productions all around the country, everything I knew about the show came from ACT’s marketing materials. But simply by having more familiarity with theater-going generally I was able to offer Melissa a space to reflect on the play and digest what we saw together. “It was my first real experience seeing a play that hadn’t gotten a ton of hype or marketing,” said Melissa, “and it ended up being a fun and informative afternoon.”

“I’m probably more likely to go to the theatre when it’s cold,” my friend Greg Socha, a 30-year-old marketing manager, told me. “There’s too much going on in Seattle in the summer and I like the outdoors too much. But once the sun starts going down earlier and it’s raining, spending time inside getting some culture gets more appealing.”

Greg has fond childhood memories of his parents taking him and his brother to see local theatre in Connecticut, but here in Seattle, he’s the latest recruit to new-to-theatre-going group. This September’s Public Works performance of The Odyssey at Seattle Rep was the first time he joined us, but he hasn’t been available to go to another performance with us since. I asked why he doesn’t see theatre on his own. “I would feel super self-conscious seeing a play by myself,” he said. “Most people are there with somebody, and it’s not like you can third wheel a conversation with some strangers.”

Of course, for many people, seeing a play with a group of friends is more appealing than going alone. Talking with Greg made me wonder if there are opportunities for theatres to help create those groups, or to encourage groups of friends to buy tickets together. For new theatre-goers especially, seeing a play alone may be uncomfortable simply because they don’t want to go alone.

A generation ago, these same young professionals might be well on their way to becoming arts board members and donors. Today, I’m hard pressed to find performing arts organizations that are targeting millennials, grooming them for their board.

Over the last two years, I’ve taken folks to see shows at ACT, Forward Flux, the Pacific Northwest Ballet, Seattle Rep, the Seattle Fringe Festival, and INTIMAN. We’ve expanded our artistic diet, too, taking in the Burke Museum, the Henry Art Gallery, and the Seattle Art Museum. I’m on a quest to introduce everyone to their favorite art form— it’s The Dating Game featuring every arts organization in Seattle. And I’m rooting for everyone to be a winner.

A generation ago, these same young professionals might be well on their way to becoming arts board members and donors. Today, I’m hard pressed to find performing arts organizations that are targeting millennials, grooming them for their board. Pacific Northwest Ballet is the only organization in town that has a dedicated track toward Board of Trustees membership. Young Patrons Circle has its own Board of Directors, giving ballet fans an introduction to non-profit boards.

My group of theatre-goers is just starting to learn about sponsoring artists, non-profit boards, and donations to organizations. But no one is reaching out to these young professionals—many of them recent MBA graduates with lucrative post-grad school jobs—to involve them in the vitality of theatre.  They’re learning about it by flipping through the programs they’re handed as they enter the theatre.

My chaperonage isn’t single-handedly changing the demographics of Seattle audiences, but it’s a step towards a younger, more engaged audience. Halfway through my third season organizing these outings, I wonder what audiences would look like if other regular audience members took it upon themselves to invite their theatre-estranged friends to the great performances Seattle offers. Theatre marketing and engagement departments have pursued all kinds of programs and initiatives to attract new audiences, especially younger new audiences, with varying degrees of success. Increasingly, I’m thinking that those of us who already love the theatre have a role to play in bringing new faces to the audience, too.

Looking to start a theatre-going group of your own? Here are my tips for a smooth transition into group theatre outings.

2. Start small. Invite two or three friends to go with you on the first outing. As you become more comfortable with organizing group outings, add more friends to your circle. Think of this as a theatrical book club. You don’t want to start too big. There’s always room to grow.

3. Plan for lunch or dinner before the show. Theatre can be a scary new experience for some people. Let your friends ease into the experience over a meal.

4. Be both a friend and an expert. Do some research on the play before you go. You don’t want to feel like you’re suddenly a professor of theatre, but folks will want to know what they’re getting themselves into. Learn the running time and a little about the play and the playwright. If you’re attending a preview performance, educate your friends on what that means.

5. Lather, rinse, repeat. You’re not going to love every play you see together. That’s okay! But keep coming back and encourage your friends to do the same. Before you know it, you’ll have a group of friends to process theatre with and isn’t that what we’re all looking for?