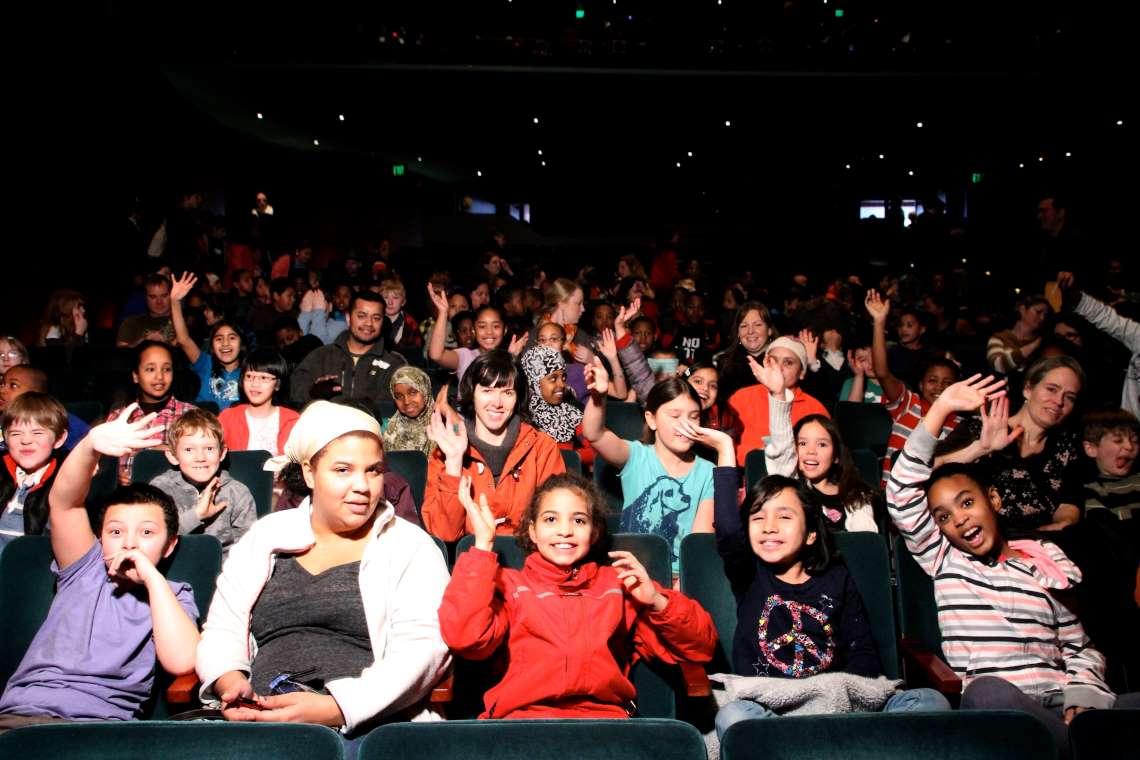 I was lucky enough to witness this firsthand at Seattle Rep’s first student matinee of the 2019-20 season. The cast of Indecent wasn’t accustomed to a 10:30 a.m. curtain, but they matched the audience’s energy with their own. After the performance, many students stayed for a post-show discussion with the cast and musicians, where the audience engaged in what felt more like a conversation than a Q&A—covering everything from Jewish identity to intimacy choreography.

“At Seattle Rep, we don’t necessarily target our shows to a young audience—or even to a family audience,” said Alex Lee Reed, Seattle Rep’s youth engagement manager. But even so, there’s always an incredible amount of interest from the schools Reed works with. This season, the only play that doesn’t have a student matinee is True West. “I’m probably not supposed to say, but these kids get enough plays about middle-aged white guys. School groups and young people are interested in POC stories. They’re interested in plays with music. They’re interested in things that are challenging in new and exciting ways.”

At the time of our interview, Reed had a wait list of 600 students for the student matinees of Jitney by August Wilson. A wait list for Shout Sister Shout! was also forming. And while cultivating sold-out performances is an exciting part of Reed’s job, he’s always thinking about the educational component. Each student matinee is programmed around Washington’s Common Core State Standards Initiative, complete with a play guide that can be taught in the classroom and additional support from Seattle Rep teaching artists.

“As an artist, director and educator, that’s my jam,” Reed said. “Theatre is for everyone, you know?”

And while Seattle Rep doesn’t program their season with young audiences in mind, Seattle Children’s Theatre (SCT) certainly does. It’s not uncommon for SCT to program four to six student matinees into each week of the performance schedule. “That’s the bare minimum that we’ll do,” said Darioush Mansourzadeh, SCT’s school shows associate.

Mansourzadeh added that he’s become a bit of an expert on the Seattle Public Schools bus system, scheduling student matinees around the transportation needs of the district. “Bus drivers have a very important job, and I don’t think a lot of people respect that community.”

Despite being a member of the marketing department, education is top of mind for Mansourzadeh. Like Reed, Mansourzadeh is always thinking about how SCT’s season ties into the national and state education standards. Black Beauty, which opened SCT’s 2019-20 season, centers on empathy toward animals, so the theatre began thinking about how to tie empathy into the classroom curriculum.

“What does it mean to be kind to someone who may never know your kindness?” Mansourzadeh asked.

But the student matinee experience doesn’t end at curtain call. Each performance has a post-show element that’s individually suited to the show and the age of the audience. For Balloonacy, a one-man play written for 3- to 6-year-olds, the post-show element was learning a song.

For The Diary of Anne Frank, which was geared toward a middle school audience, things went a little differently. “The middle schoolers were a little more rambunctious during the show, and it really affected the cast,” Mansourzadeh said. “One of the cast members went out and spoke about empathy and sympathy and how this play relates to society today. We actually had one middle school where every single student wrote an apology letter to the cast, which was really nice for the cast to see. Sometimes learning in theatre isn’t what we expect it to be, but that was a learning moment for them.”

At the Pacific Northwest Ballet (PNB), filling the nearly 3,000 seats in McCaw Hall with students is a logistical feat in itself. In addition to an annual student matinee of George Balanchine’s The Nutcracker® and a field trip-friendly excerpt of one of PNB’s story ballets each February, Shannon Barnes, director of community education, partners with eleven schools to provide Discover Dance, their in-school residency. It’s a residency that goes beyond what’s happening on stage, giving students a full view of what it takes to produce a ballet at PNB.

“Part of our philosophy with all of our programming is looking at all the ways people make ballet and dance happen,” Barnes said. “We’re talking about stage crew; we’re talking about the people whose job it is to answer the phones here—and create posters and do the marketing. The arts can be the person on stage, but do you like to draw? You can be a costume designer. We’re really peeling back the layers and being transparent about what it takes to put on a performance.”

It’s also about demystifying the experience of attending a ballet. Barnes knows that the work she does extends far beyond the classroom or even that field trip to McCaw Hall. She’s interested in meeting students and their families where they are. And one way she’s done that is by translating The Nutcracker study guide that students receive into five languages—thinking ahead to what the primary language of the child’s household might be.

“That family engagement, even if it’s as simple as, ‘We see you, we want you to share in this with your student,’ is important,” Barnes said. “The ideal would be for every student coming to the matinee to have a pre-performance workshop and a study guide in their home language. And that’s the goal.”

And PNB is working towards that goal in whatever way they can. This year’s student matinee of Cinderella will include live captioning for the show’s host. “And that just feels really good to be able to have that available,” Barnes said. “Just like, no question. We don’t need someone to ask for that accommodation. Here it is. And it’s available because we recognize that in a theatre of that size, someone’s going to benefit from it.”

Barnes added that this live-captioning technology will bleed into the repertory season, with some pre- and post-show conversations captioned.

When I asked if Barnes had a favorite memory from the student matinees she’s facilitated, her answer was strikingly similar to Mansourzadeh’s. “That line of buses is pretty impressive,” Barnes said. “I have 100 percent respect for bus drivers that navigate this area. It is not an easy area to access and we’re just grateful that people value us enough.”

We tend to forget that all great education programs have to start somewhere. So, imagine my excitement when I learned that the Seattle Opera would be hosting its first ever student matinee later this season. When I spoke with Courtney Clark, Seattle Opera’s school programs manager, she was hard at work preparing for the May 19 student matinee of La Bohème.

“We want to make sure that the students have an opportunity to come in and make McCaw Hall a place of comfort,” Clark said, adding that her plan includes a pre-performance lecture, room to move around, and concessions during intermission. “We want them to have a full experience. And everyone in this building has a hand in that. It’s a wonderful field trip. It’s something that every school should have the opportunity to do.”

Clark is both a K–12 certified educator and a classically trained opera singer, a combination that couldn’t be better suited to this role. She credits her own student matinee experience for putting her on this path. “It changed my life,” Clark said. “And I’m pretty sure it has changed others’ lives too.”

Clark shared that La Bohème is her favorite opera—and that, as a Black woman, this will be the first time she’s been able to see herself reflected in the role of Mimì, the lead soprano. “It’s the most diverse cast I’ve ever seen,” Clark said. “And all I can think about is that every student out there will be able to see themselves in some way. How powerful is that? When you can see yourself and say, ‘Oh, well I can do that.’ This can’t be an elitist art form when I see everybody represented on that stage. And that is why I do the work I do.”

And that’s the power of arts education: to be able to see yourself reflected back in the performance and know that you belong.

The Joy and Value of a Student Matinee