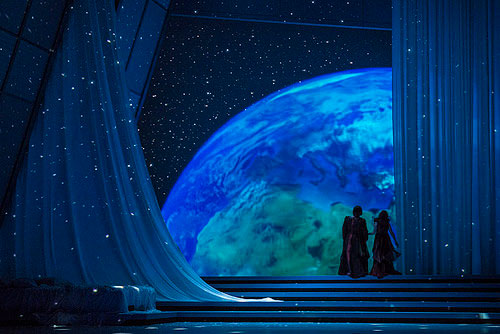 I used to naively assume that all operas were the same. If you don’t get around to seeing too many operas, you might have a similar generalization in mind: people in costumes singing old stories on stage in foreign languages with crazy opera voices. Classy, impenetrable stuff. Having just watched my third opera for this column, however, it finally dawned on me just how incredibly varied these things can be. Don Giovanni was an absurd sexual morality tale. Tosca was an intimate, emotional piece of historical tragedy. Then comes Handel’s Semele, and now anything seems possible.

Two things must be stated up front. First of all, Seattle Opera’s Semele is crazy. It’s a weird story to begin with because it’s about Roman gods, and everything those guys did was perplexing. Added to that, it’s filtered through the specific sensibilities of mid-18th century England. But it’s the way Seattle Opera stages this rarely done piece that truly makes it unique. Spare, modernist sets couple with the extensive use of digital projections and truly outrageous costume designs (two words: laser fingers) left my jaw hanging open for much of the show’s three and a half hour running time.

Which brings me to my second point: I was nursing a particularly harsh head cold, so I was blitzed on over-the-counter medication during the whole show. This was not in any way detrimental to my enjoyment, but it might have been a bit detrimental to my level of comprehension.

Fortunately, at my side as usual was my trusty opera expert and grandmother, Evelyn Troughten, who talked me through the experience in the intermission after each act.

So, Juno’s mad. Semele is sleeping with Juno’s husband? Is that what’s going on?

This is your classic “Mortal sleeps with God and God’s wife gets mad at mortal” thing. That never works out well for the mortal.

True. Why else are they gods? What you want to do before the day is over is go down and look at the instruments. [Author’s note: no edit here. This was a natural, if abrupt, shift in the conversation that’s not at all unusual with my grandmother] They have a virginal and they have a harpsichord, and they have an instrument that’s a bass lute. The virginal is a smaller version of a harpsichord and the reason it’s called a virginal is because it was played by young girls who theoretically or maybe actually were virgins.

Theoretically? Well, one would hope.

One never knows! So you should go down and take a look, these are very rare instruments. You may never see them again. Well, harpsichords you see around quite a bit.

I see harpsichords constantly! This opera is very simplistic and very complex at the same time. I only have a vague idea of what’s going on at any point.

You see, I know because I read about it. And I went to that talk, the pre-performance at the Queen Anne library. The opera also has a blog and they put information out and you can read about these things. The ideal is to familiarize yourself with the story so that you understand what’s going on.

I’d never seen opening credits for an opera before.

I’ve never seen anything like that before! Anywhere. That’s what surprised me the most. You’ve got this curtain hanging. You’ve seen curtains before and you think nothing of it. And then all of a sudden “Semele” is projected on there. And I thought, “Wow, this is different.” And then: people. The cast! You’d see the real person on stage, and above them, their names and the character they play projected on the curtain! I don’t know how they did it, but it was clever! That’s what I liked best. Because it was different. I like different things.

I kind of forgot where I was with some of those trippy projected visuals. Which is fine, because I can’t tell what’s going on anyways. I’m just listening to the music and voices.

Well, you remind me of what it was like when I first started going to the opera. They didn’t have the supertitles. I’d just listen to the music because it was so gorgeous, didn’t have a clue what they were saying.

At this point we were fortunate to be joined by Jonathan Dean, the director of public programs and media for the Seattle Opera, who gave us a bit of historical context for the piece.

Dean: Most of the action of the story is in the final act. That’s why it’s longer. When this was written, a lot of people couldn’t show up at the theater at the beginning of the show. They’d come later on, and they didn’t pay any attention. That’s one of the reasons people repeat themselves so much in this show. You were sort of lucky if you got the audience to pay attention.

So the repetition is literally just to get it through to people?

Dean: Yeah, the opera was a very different place back then. It was much more like going to a casino. And these people would step out in these elaborate costumes and sing these amazing things and the people would be like, “Oh, okay, this is pretty good.” There’s a very funny one in the next act, the line is “Myself I shall adore if I persist in gazing” and he overdoes it to the point of stupefaction! [Note: Indeed!] The other thing about it is, it’s an ancient story, but it’s satire for a specific period: the first half of the 1700s. There are funny, coded messages that they would’ve gotten at the time.

I can tell that there’s all kinds of stuff that I’m missing. If only there were footnotes for opera!

Dean: Well, you could’ve come to our pre-show talk—

Grandma: I tried to get him to come to that and told him that’s part of going to the opera!

It’s okay! The projected visuals are working pretty well for me, because I’m on cough medicine, so I’m kind of in a trance looking at this stuff.

Dean: Well, that’s actually sort of like—because again, when people would go to the theater back in those days, they were drinking heavily, they were gambling. If they had a private box, they could close the drapes and carry on their illicit affair in there.

Dean: Yeah, it wasn’t polite like it is going to an opera today. It was a little bit more upscale than bear-baiting, which was going on across the street!

Give me a quick first impression of this opera.

The production was just out of… they said it was going to be great and really different, but I could never have thought that it could have been so good.

What was your favorite part?

There’s no favorite part. Because it was all good and the music was lovely.

My favorite part was the lady with the laser fingers.

Well yeah. I suppose so.

I’m a sucker for laser fingers.

I guess you have to say that was the most fun part. Her costume was great. I’d heard about these costumes, and I’d seen drawings of them, but the drawings didn’t do them justice. And it was good that they used people that looked like the kind of people that the opera was about. Somebody that a god would fall in love with.

Closing thoughts? What would a person going to see this piece need to know, aside from having an extensive background in Greek mythology?

I would say that it’s the most unusual opera I have ever seen. For many reasons. The projections. The opening credits. The repetition in the libretto. I would say that it’s nice music, and even beautiful in some places. And you’ll hate yourself if you don’t go see it. I don’t know if any other opera company would be bold enough to do it.

That’s a pretty good one to go out on.

Semele runs through March 7 at the Seattle Opera.