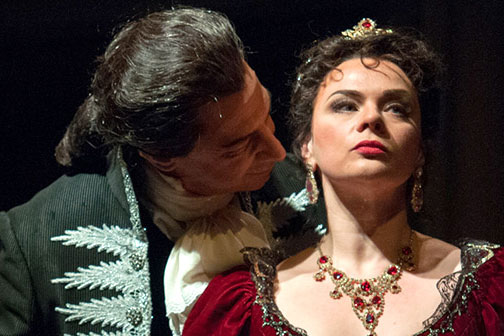 Giacomo Puccini’s Tosca premiered in Rome on January 14, 1900. People back then probably thought it was “bully” or “capital” (buono in Italian). Shortly thereafter, airplanes were invented, there were a couple of World Wars, and Ronald Reagan was born and died. Now you can go see that very same show at the Seattle Opera at McCaw Hall through January 24. The sleek, modern words I’d used to describe it today are “awesome” and “gorgeous.” Particularly awesome was once more having the privilege of attending the show with Evelyn Troughton, AKA Opera Superfan #1, AKA my beloved grandmother.

Opening night! It was an event. There were spotlights out front; Seattle Opera is not messing around. I was not the youngest person in attendance this time, but I was the most poorly dressed, so that’s gotta count for something. Grams and I dined at the Prelude Restaurant in McCaw Hall, hung out in the press room sipping wine (well, I sipped wine) and we had pretty great seats among Seattle’s cultural elite. This experience opens up entirely new ways for me to feel insecure!

This show is spectacular. I had enjoyed Don Giovanni, but the opera was so old and pontifical that it was somewhat difficult to form a genuine connection with the material, lovely as it was. Not so with Tosca. This show worked on every level for me. The music was consistently pleasurable, the performances and the characters were intimate and relatable, even the storyline—not usually the biggest priority for opera—was absorbing. Hell, I even choked up a few times, and from the chorus of sniffles I heard all around me, it would seem I wasn’t the only one.

Tosca is an opera in three acts, so this time Grandma and I chatted during the intermissions and right after the show. She had seen it many times previously. I didn’t even know what it was about. “Tosca” could’ve been the name of a donkey for all I knew. Floria Tosca, it turns out, is a beautiful singer, whose life takes a tragic turn when her boyfriend Mario protects a political dissident from the evil chief of police, Baron Scarpia. Oh, and again—if it’s even possible for a 115-year-old story—there are spoilers ahead!

Okay, one thing you were talking about during dinner was the five things in Opera that you’re looking for, so fire that off for me.

Five things. One: the music, of course. The singers. Not so much the voices–well, part of the singer’s job is the voice and part of it is acting.
Two: the sets.
Three: the costumes.
Four: the lighting. Notice how, in Don Giovanni, how striking the lighting was? Well, this one was very traditional.
Five: the music. Did you notice the difference in music when Tosca was singing and when she and Mario are romancing, how passionate the music was, and when Scarpia walked in?

Yeah, then it sounds like the Imperial Death March from Star Wars.

Exactly! [Laughs] [Note: she is probaby humoring me here]

That actor was great as Scarpia. He looks the part.

Yeah. Mean. Well, Scarpia was a mean, mean man. But you know, this is much more naturalistic [than Don Giovanni]. You get the feeling that this could really happen. Don’t you think?

Well, I don’t know what’s gonna happen yet! But it seems like, you’ve got a jealous lady, we can all relate to that.

You noticed that. [Laughs]

She turns it off and on. And it doesn’t take much to inflame the jealousy! It makes me wonder, I’ve always had one idea that a person who is a jealous person is insecure. And maybe she is, too, even though she’s a famous diva.

She’s a diva in the modern and the original sense of the term.

What do you mean?

Well, when people say “diva” these days, it’s like a personality you can have. It means that you’re flamboyant and emotional and needy.

Oh, they’re using the term as describing a person who is that way. Temperamental.

Exactly. And she happens to be that way, and then she literally—

Okay, what do I have to look forward to in Act Two?

Torture and a lot of blood.

Yes, he’s more easily aroused by that than the moon and cooing and wooing—those things don’t match his personality. He’s an evil man!

The guy who plays him, do you happen to know the actor’s name, off-hand?

Oh, so you know him?

No, I don’t know him personally.

Man, he is REALLY good. He just revels in it.

Yes, he’s good! That’s his role! There is no one who does Scarpia as well as he does it.

This is a good one. This is my favorite opera so far.

How many operas have you seen?

[Laughs] You’re getting worldly and wise! Well, you’ll have to keep coming.

I can’t wait for act three. That second act seems about as dark as can be, and just when it doesn’t seem like it can get any darker, there’s that twist ending where Tosca defeats Scarpia. It was a weirdly happy ending for an opera.

So in this third act, everything really falls apart.

Anybody of any consequence dies. Unexpectedly! Scarpia never thought he was gonna be killed. Mario was ready to die, but at the end he thought he was not going to die, so that came unexpectedly. Tosca thought she was going to live happily ever after and when she found out she wasn’t, she jumped. And I also think it was at the last minute that she killed Scarpia [in the second act] because until she saw the knife on the table it didn’t occur to her. Murder was the last thing she would ever do. Because she was not that kind of a person.

“These hands were made for loving and caressing children, and not stabbing evil guys” or words to that effect.

The thing that I always wondered about her character: she’s portrayed as so religious, devout, but she had affair with a man!

She wasn’t married or anything.

No, they weren’t married, but they were intimate!

But they weren’t married to other people.

I don’t know. I think people probably did it all the time, but maybe they didn’t do it publicly.

Right. They didn’t live together. They’d meet in a barn, or they’d go to the next town where people didn’t know them. But Tosca and Mario were openly having an affair!

And the opera doesn’t make much of it. In the libretto, they’re just star-crossed lovers and things go terribly awry.

Tosca runs through January 24 at the Seattle Opera.