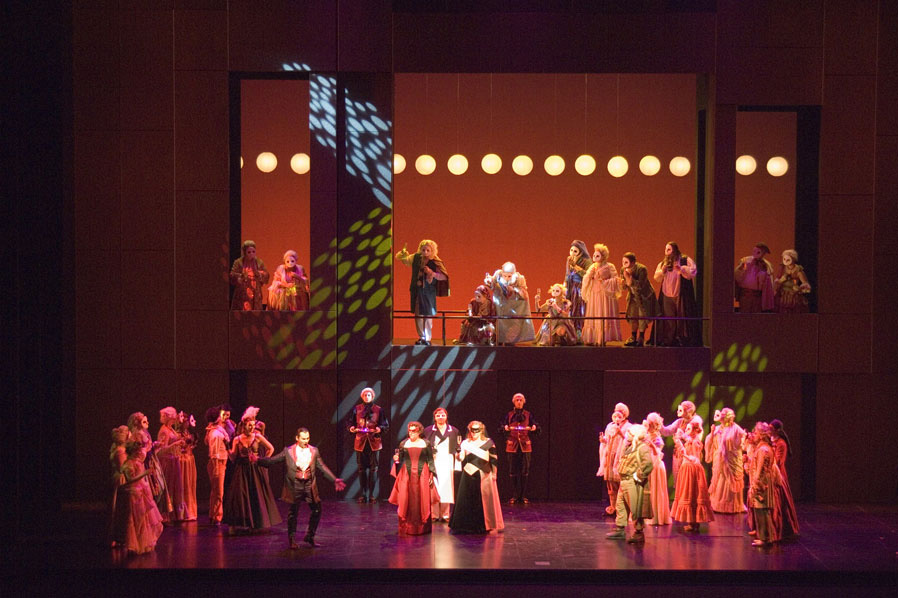 Through November 1, the Seattle Opera presents Don Giovanni, the brilliant, insanely famous opus by some guy named Mozart. It first premiered in 1787 and it’s still packing houses today. To make sure I came into this production armed with as much knowledge as possible, I attended the show with one Evelyn Troughton, an opera expert and booster who happens to be my grandmother.

The Experience: First of all, everyone who goes to see this show should have the good fortune of eating burgers with my Grandma before curtain call. Watching this diminutive 84-year-old lady put away a burger the size of her head faster than her portly grandson is a show unto itself. With bellies full, we headed into the stately McCaw Hall, where I was treated to equal parts opulence, dignified service and jarring remarks about my relative youth. It seems that I skew a little bit younger than the typical opera patron. This is one of the many reasons I plan on going to the opera much more in the future. It feels good to be a kid again.

The Show: The music is… well, it’s Mozart. There’s a reason his name is synonymous with “musical talent”. It’s the same as “Einstein” with “intelligence” and “Rembrandt” with “toothpaste”. The story, if you’re not already aware (I wasn’t), is about a guy named Don Giovanni, who is really rich and has, let’s say a lengthy and varied romantic history. That’s about as delicately as I can put it. He’s a bit of a scamp, going around picking up ladies and ruining people’s lives for kicks. He even kills a guy. That’s not a spoiler; it’s literally the first thing that happens. By the second half of the show, pretty much every character wants him dead, including a ghost. Will he ever face his comeuppance? Do you really have to ask?

This modern adaptation uses a striking minimalist set design that draws maximum effect out of every beam of light. There are some breath-taking technical effects employed throughout, with a genuine showstopper at the end. My favorite part about watching bona fide elegant shows like this is watching people with actual, honest-to-god talent do their thing. I’m talking about went to a fancy school for years, learned at the feet of masters, sacrificed everything, very few people in the world are able to do this kind thing TALENT. It’s a humbling thing to watch people who have truly mastered the classical arts, having never mastered anything in my own life. Well, maybe sleeping. I’m really good at that.

I was in awe and decidedly out of my element. For some real insight, I interviewed my Grandma after the show to get her take. Oh, and if it’s possible for there to be spoilers for a 300+ year-old, legendary opera, there may be some within.

Okay, so what did you think?

Well, what I want to know is what did you think!

I thought it was awesome! I was trying to do the thing you told me about—to close my eyes and listen to the music—

Well, you shouldn’t have done that the first time around! [Laughs]

I didn’t have my eyes closed the whole time.

But it really is transporting. You see all of these amazing artists working hard up there, but you close your eyes and it’s just the music and all the sudden it almost feels like you’re in a different place.

So what’d you think of this version of Don Giovanni?

Wouldn’t you say it’s kind of an indeterminate period?

It is! There’s a motorcycle, but then there’s the scene where they were all dressed like they would have been in the 1700s, at that party.

Well, that was a costume ball.

Most of the time, you couldn’t tell what period it took place in. Some of the clothing was contemporary, some of it was old-fashioned, it was a mixture. Then at one point he even had a remote control, and he was changing channels! [Laughs] So what period is it? It’s fine, because the story is utter fiction. It’s just a man’s dream.

Oh, is that what you think it represents?

Well, how many men would have wanted to live a life like that? Dreamed of being a Don Giovanni or a Don Juan. A woman’s man.

I guess so. Talk a little bit about Don Giovanni the opera, historically.

Well, Mozart wrote it, of course, and it’s just utter fiction, I think. This is Mozart’s idea of what a Don Juan was. No man in real life was ever like that. How many was his total number of conquests? 1000 plus 600 plus 91 and so on in all those different countries, what’s the total? I think it must be a good three thousand for round numbers.

Do you think this was shocking to people at the time?

Well, even 10–15 years ago, I don’t think they would’ve done a production as risqué as this one. The period it takes place in now dictates the content that you see on the stage. If this had been a movie, I think it would’ve been R-rated!

Well, there you go. Ten years ago: R rated. Today…

But what about in Mozart’s time? How would, say, the song about his list of “conquests” have played?

Well, women aren’t seen as much as possessions to be owned now as they were during those days, I think. But then again, maybe things were less restrictive those days, I really haven’t studied it very much. At any rate, much of what you see on stage was made for modern sensibilities anyways, the way the material is handled.

But what we’re hearing, the Italian, is exactly as it was written by Mozart, right?

The Italian was as it was written. It’s just maybe translated a little bit different. What you have to do to get the thing across… I can tell you of an instance from another opera I saw, where they used a word and the meaning today is entirely different than what it meant when it was first written. You don’t have to use this if you don’t want to-

The Elixir of Love. There’s a farm girl. And the boyfriend is a peasant worker and he’s in love with her, and she says in one of her arias that she’s had lots of “lovers.” Now, “lover” in that day and age meant “sweetheart.” Someone who was courting her. But it doesn’t mean that today. Now it means-

Yeah. And they showed it to a class of high school students and I was concerned that they were going to get a whole different idea of what she was! She was not a sweet little farm girl if she’d had all these “lovers”, she’d have been, you know, a slut!

But what really struck me about this opera… it’s very emotional. So many emotions expressed! I’m talking about love, jealousy, hate, young love and lust…

Yeah! Don Giovanni is Mister Lust. And that’s what strikes me about it. That and the pure fantasy of it. There is not a man alive, I think, who could woo a woman that quickly.

Like a lot of the literature from that era, this one ends with the big, heavy morality lesson. I feel like that’s how they got away with the naughty stuff at the beginning.

Possible, possible! To get it past the censors at the time. Could be. Well, the full title of the opera is A Rake Punished, or Don Giovanni, of course.

Oh, really? That seems like kind of a spoiler.

I guess it was when the statue broke through the wall. I knew he was going to be coming to dinner, but when that wall broke apart, that was the most startling part of the whole thing.

It was pretty memorable. I actually said “holy crap” out loud when it happened.

I heard that! (laughs) And he looks so real! He looks like a real statue!

That was cool. Try to persuade a person who wouldn’t ordinarily be inclined to go to the opera to go see Don Giovanni.

I’d say if you wanted to see a good opera with great music with a story that’s entertaining and sets that are—although minimal—fascinating, and an ending that’s unbelievable… would that describe how you felt?

Absolutely. Say, can I have a ride home?