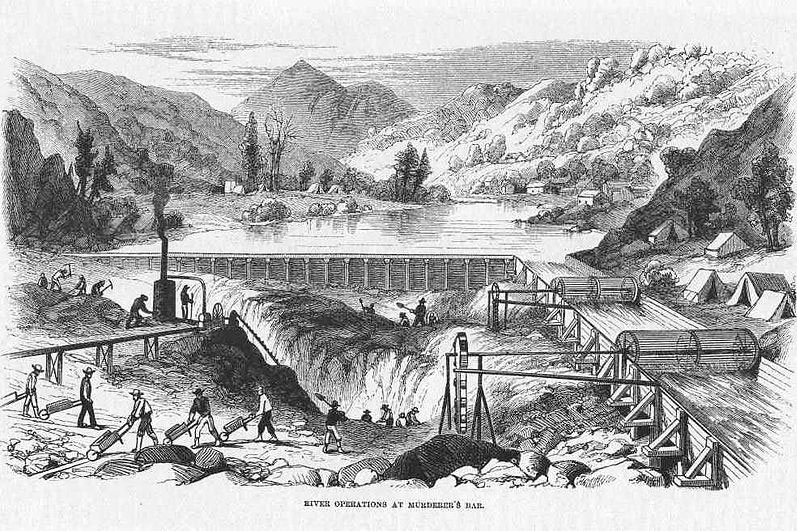 All of the cinematic musicals that I’ve watched for this column so far were huge hits. World-beaters featuring famous songs, iconic performances and indelible set pieces. Think of “Do Re Mi” from The Sound of Music, “Summer Days” from Grease or virtually anything that Patrick Swayze says or does in Dirty Dancing. This time, however, it’s different.

Paint Your Wagon is no masterpiece, but like fellow notorious bombs Heaven’s Gate, Ishtar and New York, New York, it’s far more enjoyable than its reputation—and people are slowly but surely coming around to it, nearly 50 years after it detonated at the box office. Sure, Paint Your Wagon is unquestionably bizarre and ridiculous, but it’s full of jokes and ideas and it’s got a big heart. Heck, even a few of the songs are pretty good. Here’s what I learned watching a film that virtually none of you have seen before.

It definitely looks like it cost a trillion dollars.
This is one of those movies that just kept building and building in search of an answer. Much like the aforementioned Heaven’s Gate, it’s filled with wide panoramic shots packed with hundreds and hundreds of extras, horses, wagons and cabins. They built up the boomtown setting of No Name City from scratch, and when the producers felt like they were running out of steam, the answer always seemed to be “Pack more crap in the frame!” That works for me. I love big, overstuffed epics. They couldn’t use CGI to fill the frame at the time, either, so each cabin, each man, each horse, each water tower is a real thing with a substantial dollar value attached to it. Lots of dead movie jerks no doubt lost a fortune on this baby.

Lee Marvin wins the battle of singing western tough guys.
Clint Eastwood isn’t bad in the film, exactly. He’s just not suited for this kind of thing. I’ve always viewed Eastwood as fundamentally a movie star. Every squinty glance and every clenched jaw-whispered line is finely calibrated to milk just the right feeling of awe out of a viewer watching him in tight close up on the big screen. He’s celebrated for asking Sergio Leone to actually cut dialogue from his scenes when he played the Man With No Name. Eastwood, like John Wayne, had a remarkably savvy grasp of the power of his image on screen. He wasn’t, in other words, remotely theatrical. When he sings in Paint Your Wagon, it’s not exactly like he’s got a bad voice per se; it’s just that his energy is off. It’s clearly not in his wheelhouse.

Marvin, on the other hand, though famous for gunning people down on film, started out on Broadway and was completely at ease doing Eugene O’Neill plays. His portrayal of charismatic drunk Ben Rumson is broad, goofy and fun. His singing voice is arguably worse than Eastwood’s but his nearly spoken-word style of singing is rich and endearing. It also helps that he has the more entertaining role. Eastwood is playing a pretty standard issue romantic lead, while Marvin is a lovable, flailing, shifty-eyed boozehound. One of those is a hell of a lot more fun to watch than the other.

I’d basically watch anything with Lee Marvin and Clint Eastwood in it.
I love Clint Eastwood and Lee Marvin so much, I’m not sure if I can be fully objective about this movie. I just like watching those two guys walking around next to each other. Even when they’re both gleefully scheming to “steal” six women from a neighboring town, which is a pretty shitty thing to do when you think about it. On that note, I should probably address the genuine weirdness that is the temporary core of this film: the first half is largely about buying and stealing women. But, you know, in a funny way. That sounds bad, I know, but ends up being a better kind of weird than that.

It’s not quite as scummy as you might think.
At first, watching Paint Your Wagon reminded me of watching Carousel, a musical that had an oddly…understanding view of domestic abuse. “This is fully retrograde stuff,” I thought, as a scores of men ogled powerless women and eventually held an auction to purchase an unhappy wife from a polygamist Mormon trio that shows up one day in No Name Town. After Marvin purchases his new bride while blackout drunk, a priest marries them in the least romantic manner possible: “Dearly beloved, we have gathered here together to grant this man Ben Rumson exclusive title to this woman… and to all her mineral resources.” It’s satirical to a degree—in my notes, I wrote “calling this movie sexist is like calling Loony Tunes cartoonish”—but still, all the creepiness starts to get pretty creepy eventually.

Paint Your Wagon actually heads in a different direction than I was expecting. Eventually, the purchased wife, Elizabeth (played by Jean Seberg of Breathless), decides that she actually loves Eastwood. AND Marvin. She wants to be married to both of them. “You can’t have both of us!” Marvin argues. “Why not?” Seberg replies. The two friends can’t think of a single reason. “Hot damn!” shouts Eastwood, “I think it’s history-making!”

Didn’t see that one coming.

It’s a surprisingly progressive mentality for an old-fashioned Western musical. Mind you, this comes after Eastwood and Marvin’s unambiguously romantic (if not overtly sexual) relationship has been well established (Clint: “I never liked a man as much as I like you.”) Sadly, but inevitably, this festival of gleefully mixed polyamory doesn’t last forever.

It’s got that classical musical dichotomy.
A little bit past the halfway point, there’s an intermission. “Fucking INTERMISSION?” was how I put it in my notes, because I was in disbelief that a doofy, booze-soaked oater like Paint Your Wagon warranted the pretentious Ben-Hur treatment. Sadly, that preponderant musical interlude signals the point in which the movie stops being all that much fun. In the second half, puritanical Christians arrive in No Name City, and Eastwood and Seberg eventually come around to a more civilized way of living. There’s even an extended sequence where the whole sinful town literally collapses under the weight of its own lust and avarice.

It reminded me of many of the operas that I’ve seen, like Don Giovanni, where the first half is stacked with delightful sexual innuendo and partying, and in the second half the characters dutifully pay the price, as God predictably decrees.

Paint Your Wagon doesn’t entirely drink the Kool-Aid of righteousness; Marvin drifts off in the end relatively unscathed, ever the ribald drifter, not caring where he goes “as long as it’s 100 miles ahead of civilization.” The film clearly embraces hedonism and only halfheartedly comes around to the “light” in the end. But that doesn’t make the second half any less a buzzkill. When No Name Town’s citizens are no longer boozing and dancing and marrying whomever and however they please, it’s certainly intended as a metaphor for bland society taking hold of the Wild Wild West, but it’s also the death knell for what works about Paint Your Wagon. Fortunately, the film’s signature song, Marvin’s wonderful “Wan’drin’ Star” is in the second half, which helps ease the pain.

It’s too bad they don’t make disasters like this anymore.
I can understand why people thought this movie was such a turd when it came out. It’s a big, weird, sloppy mess. But it’s got an iconic Lee Marvin performance, Clint Eastwood trying his best, three or four solid ditties, and a classic epic scope PLUS it’s morally all over the map. It’s the kind of bomb that puts everything on the table and loses because it’s actually only got two pair. It’s far from boring—at least in the first half—and it’s got a wonderful sense of mischief and sleaze that you won’t find in most classic Hollywood musicals.

I can’t wait to see it on stage. I do, however, hope it’s less than three hours long. Not counting intermission.