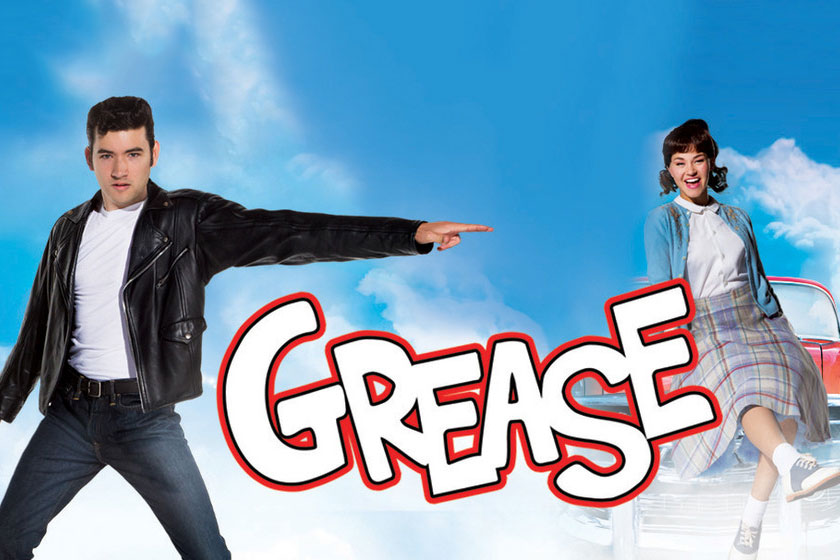 My first writing assignment for Encore was to watch the film Dirty Dancing for the first time in my life and record my thoughts. I liked it more than I thought I would, particularly that beam of inarticulate light that was the young Patrick Swayze. It wasn’t the kind of movie that I’d watch twice, but I could definitely see what the hype was all about. Did I have the time of my life? Not necessarily. Had I never felt that way before? Perhaps, perhaps.

And now, my friends, the wheel has come around once more. Encore has called upon me to watch YET ANOTHER beloved musical period piece about dangerous love that I had somehow managed to go my whole life without seeing. You see, starting July 9 one of the most beloved and successful musicals ever to feature the line “Bite the weenie, Rizz!” is coming to 5th Ave.

I just watched Grease for the first time. I honestly can’t explain why I’ve never seen this classic—it’s one of the biggest box office hits of all time, filled with smash hit songs and iconic performances. Really, though, it just never came up. I don’t think a single person has ever said to me “You know what? You should really check out Grease.” Maybe I just put out that cynical, this guy would never like Grease kind of vibe. It’s probably the same reason Mormon missionaries take one sight of me when I open the door and say, “Eh, never mind.”

Maybe I’ve just gone my whole life without running into real Grease aficionados. That’s no mean feat; clearly there are millions of them out there. But let’s stop beating around the bush and get down to brass tacks! I’ve got a lot of weirdness to cover. Here’s what I learned watching Greasefor the first time.

Grease is not a very good movie.

Settle down. I didn’t say it’s not fun or that the songs aren’t super-catchy. It is, and they are. But it is a very ramshackle little film: tonally disjointed, indifferently directed and featuring a pretty weak lead performance by Olivia Newton-John. You get the feeling that if this movie had any kind of plot whatsoever, you would be lost within five minutes. It was based on a very popular musical from 1971, so maybe the producers felt like the property and the songs were so beloved that they could put very little talent behind the camera and it would still work out okay, so long as the performers were appealing enough. Clearly, they gambled correctly.

At the helm was some TV director named Randal Kleiser (who went on to have further unremarkable journeyman success with Blue Lagoon, Flight of the Navigator and Honey I Blew Up the Kid) and he fills the movie with the kind of competent, unremarkable imagery that you might expect from a director whose name you’ve already forgotten. I watched this baby on Blu-ray and let me tell you, it looks adequate.

Moreover, Grease can’t seem to decide what kind of movie it is. It’s kind of funny, sometimes. Kind of romantic, I guess. It’s a musical that goes long stretches without any songs. Sometimes there are fantasy sequences. Sometimes there are attempts at genuine emotional character arcs, but they are quickly abandoned. It tries to be sweet, dirty and cynical at different intervals, but none of it melds together. It feels more like a collage than a complete, cohesive whole. Mostly, it’s a sex, songs and nostalgia delivery system, and it certainly delivers on those three fronts.

What it lacks in quality, it makes up for with pure sleaze and energy.

Right now, I’m wondering just what I can get away with quoting from all of the lewd and lascivious dialogue in this movie. The song “Greased Lightning,” which is supposed to be about a car, is actually about how John Travolta’s character Danny is going to have lots of sex and enjoy himself very much in the process. I think there are twelve lines in this movie that aren’t explicitly or implicitly about sex. Here’s a passage of dialogue between Danny and one of his doofus pals:

SONNY: You mean she puts out?
DANNY: Oh, come on, Sonny, is that all you think about?
SONNY: Friggin’ A!

That exchange could just as well be between John Travolta and the movie Grease. Sometimes the characters get into trouble or interesting, formative events transpire, but the movie really isn’t interested in all that. Grease just wants to ditch all the drama and peek up ladies’ skirts from under the bleachers or figure out who has bigger jugs than Annette. Sure, Dirty Dancinghad some pretty ribald dancing in it, but Grease might as well be called Dirty Everything.

As a stand-up comic, I used to tell a joke about the song “Summer Days,” pointing out the horrifically suggestive nature of the line “Tell me more, tell me more, did she put up a fight?” Had I actually seen Grease, I could’ve had a solid 40 more minutes of material. It’s like Porky’s with songs and no nudity.

That said, if you get a bunch of good-looking, talented kids together and make them dance around and spew non-stop smut out of their mouths, you won’t hear me complaining (much). The movie is undeniably fun. It’s the kind of fun you have when you’ve had one too many shots at the bar with your friends and you all spill in to the streets at 2:00 a.m. with your arms around each other’s shoulders, shouting things at terrified strangers. It’s bad fun.

Newton-John Travolta are the Yin and the Yang of musical performers.

Newton-John has a wonderful voice. You have to give that to her. She belts out her songs like a person who was given one great gift, and that gift is definitely singing. Acting-wise, she’s a few clicks better than an athlete guest host on Saturday Night Live. Travolta, on the other hand, is pure charm and magnetism. From the moment he first cocks his head and beams at the camera, you’re thinking Oh, this guy knows what he’s doing. He’s funny, cocky, and absurdly handsome; he’s at peak Young Travolta. And he’s no slouch in the dance department, either. His voice, however, is a clear explanation for why his singing career never really took off.

But while I’m on the subject of Travolta: hmmm…absurdly handsome, cocky dancer in a romantic musical? Am I the only one thinking of Patrick Swayze in Dirty Dancing right now? There are a lot of parallels between these two iconic breakout roles. They’re both swaggering, steamy dance-hunks with hidden hearts of gold and soft spots for “nice girls.” But the question is: who does it better? To find out who’s the best of the period piece bad-boy dance-hunks, I put together this helpful and accurate chart:

Oohh, sorry JT, that’s clearly Swayze for the win! I’m sure you all saw that coming.

Stockard Channing blows everyone else out of the water.

Channing plays “Rizzo,” a brash young lady who, well, has sex a lot. Everybody in this movie has sex a lot, but I guess Rizzo somehow finds time to do it more. She also smokes, drinks, eats twinkies and can’t stand squares. She’s awesome.

During a sleepover, while the square (and boring) Sandy (Newton-John) is in the bathroom, Rizzo sings a mocking song about chaste, boring gals, laughingly singing “Look at me, I’m Sandra Dee, lousy with virginity!” and “I’m gonna get my kicks when I’m still young enough to get ‘em!” She’s not some lost, wayward soul who has sex to be liked. She just really digs sex, and doesn’t care about what anyone thinks about it.

At a certain point, she has a pregnancy scare, and you start to think that the movie is going to punish her for her wanton ways. The movie itself seems conflicted about her. Remember, Greaseis just like Danny’s doofus pal Sonny. It loves sex and ladies, but it’s also kind of dumb. Much as the movie halfheartedly tries to be judgmental of her, however, the character and Channing’s dominating performance always win out. By the end, as a casual aside, Rizzo shouts down to her friends from a Ferris wheel that the pregnancy was just a “false alarm.” And really, what else would you expect from Grease? If Rizzo had a baby, that might cut back on the amount of time she could spend having sex or talking about sex, and then she could no longer exist in this movie’s bawdy universe.

Every high school in every era had WAY more sex than mine did.

That’s just clearly a fact. There must have been something about the mid to late 1990s. I blame Clinton.

The producers of Grease were right. These songs are classics for a reason. Just put some people in front of a camera, play the songs, make the kids dance and everything’s going to work out all right. There’s a scene later on when a TV dance competition comes to Rydell High. The host nearly makes out with an under aged girl and it’s played for laughs, but that’s not what I wanted to talk about. If I were to detail all of the pervy sexism in this film, I’d never finish writing this column.

The school gymnasium is packed with kids eager to win the big dance off. After the show begins, one kids screams “Hey! There’s the camera!” as if the immobile, six-ton Golden Age of TV monstrosity had somehow been invisible up to that moment. All of the kids pour into the frame, waving, smiling and dancing. We see folks a home smiling and waving at their kids on screen. That’s what Grease offers: the pure, senseless, giddy thrill of youthful energy and movement. Plus sex.

And so, in the end, Travolta and Newton-John—who have clearly been in love since the beginning of the film—reaffirm that they indeed are in love, wave to their friends and fly into the sky in a car with a transparent hood. There have been exactly zero flying cars depicted before this moment. That’sjust the kind of movie it is.