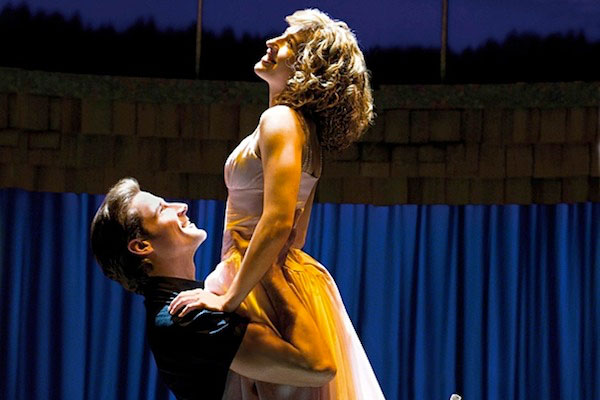 Dirty Dancing the Musical is coming to Seattle January 20 through February 1 at the Paramount Theater. It’s based, of course, upon the classic 1987 Patrick Swayze vehicle, which was massively popular at the time of its release and even more massively popular now. It’s also a film that I had somehow gone my entire life without seeing. How can this be possible, you ask? A cultural touchstone of this magnitude, and I, a self-professed movie buff? Heck, I’ve seen Transformers 2 more than five times, and I hate that movie.

The primary reason is because this movie came out when I was nine. I was chemically predisposed to be uninterested in it, no matter how often my mom blasted the soundtrack in the living room. The “dirty” part of the title sparked some interest, but early reports from friends who had seen it in the theater assured me that there were zero naked ladies in the film. It might as well have been called Dancing. The only thing I would’ve been less interested in seeing would be a movie called Insurance.

But now I’m legally an adult, Dirty Dancing the Musical is coming to Seattle and the time has come. So I sat down with Dirty Dancing and watched it all the way through.

Here are just a few of the many, many things I learned from watching this beloved film.

It’s AWESOME.
Note: I did not say GOOD. It’s kind of not good. Hopefully this apparent dichotomy will make sense by the end of this piece.

Patrick Swayze is the best part of this movie.
He IS dancing. His character, Johnny, enters rooms filled with dancing people and immediately asserts his dancing dominance with wild feats of acrobatic dancemanship. All other dancers form a circle around him and cheer wildly as he deftly and often shirtlessly displays his gifts. This encircling phenomenon happens at least three times. When Jennifer Grey’s “Baby” sees Johnny the first time, she slips into a daze like she’s just been hit in the face with a beach ball. But that’s kind of what everyone looks like when they behold the presence of Johnny, and the viewer needn’t wonder way. Few actors could sell that kind of awesome like Swayze. He was a force of nature.

Patrick Swayze is also the worst part of this movie.
When he’s not dancing, he is often saying words, which is not his strong suit in this film. He’s using an accent that could best be described as Brooklyn by way of the Deep South. It’s weird and distracting. He’s also bad at portraying emotions, which is a significant portion of an actor’s job. But the movie seems to realize this, and for each time he’s angrily shouting about how “the reason people treat me like I’m nothin’ is because I AM nothin’!” we can be confident that we’ll soon see him shirtless again, spinning around, hoisting ladies up over his shoulders and we’ll immediately forget we ever found fault in him. “Oh Johnny, you ARE somethin’!”

FYI: I ran the numbers, and Swayze is shirtless precisely 68.32% of the time he’s on screen. Feel free to check my work.

The dancing is actually dirty.
When Baby first witnesses the titular style of dance, she has just busted in on a secret camp employee dance party. Before I go further, I should point out that this movie takes place in a strange camp where families go to learn dancing together. Now I’m sure this is a thing that actually existed in the early Sixties. Heck, these things might still exist today. But outside of Dirty Dancing I’ve never seen nor heard of such a camp. But then again, 1963 was a much more innocent time, camp-wise.

All of the dancing that the instructors teach publicly is tame and by the book: tangos and mambas and such. But behind closed doors? Well… you know the title of the movie. Baby walks in on a room full of attractive people doing this and is shocked and allured. “Where’d they learn to do that?” she asks a friend, as if you needed weeks of training to grind pelvises with someone. Johnny is able to show her in less than a minute. Step 1: Thrust pelvis. Step 2: Repeat.

I know little to nothing about dance, but “dirty dancing” seems questionable as a legitimate dance style. It’s really just rhythmic heavy petting. I can understand why the parents might not approve of it. I’m not even sure I approve of it.

The plot was a tad more adult than I was expecting.
Look, there’s no way to sugarcoat this. The main plot of the movie involves “Baby” taking the place of Johnny’s dance partner so she can get an abortion. That’s what this beloved piece of fluffy ’80s/’60s nostalgia is about. It’s all of a piece with some of the larger, non-dancing related themes of the movie, which takes place in the Summer of 1963, “before President Kennedy was shot, before the Beatles came.” So a lot of it is about the alleged shift in values from the stable, conservative ’50s to the tumultuous, radical 60’s. There’s loads of feminism (“everyone called me ‘Baby’ and it never occurred to me to mind”), class conflict, allusions to the escalating crisis in Vietnam, and—yes—abortion. It all seems surprisingly grounded in reality for a movie called Dirty Dancing.

But not really.
I mean, all of these thorny issues are basically solved with dancing in the end. In fact, the movie abruptly shifts away from its weightier aspirations in the climax, which almost seems like a completely different movie. Johnny’s reputation has been slandered and he’s been kicked out of the camp, Baby is on the outs with her once trusting father and all seems to be lost. Then, Johnny heroically comes back, scoops up Baby (“Nobody puts Baby in the corner”), and they interrupt the camp talent show to perform a dirty dance to the tune of a special record that Johnny produces.

That record is very special indeed, as it contains the sounds of the far-out future world of 1987, specifically “(I’ve Had) The Time of My Life,” a song which doesn’t even attempt to approximate the music of the early ’60s. I half expected Marty McFly to pop out and start shredding a Van Halen solo at any moment. Soon, caught up in this alien-sounding, powerful jam, all of the other dancers spontaneously join Baby and Johnny, performing an improvised routine in COMPLETE SYNCOPATION.

But that’s not all! This dirty dance fever spreads to the entire camp! Everyone begins to dirty dance with wild abandon, even the old people and the fat people! It’s an unprecedented event that quite possibly gives birth to the peace and love generation right there in that dance hall in the Catskills. It’s pretty ridiculous. In fact, the odd seriousness and relative realism of the earlier stuff makes this final detour into out-and-out fantasy particularly bizarre and, well, kind of awesome. It’s like The Karate Kid ending with Daniel defeating his opponent and then flying away into space in the final shot. WHAT? Where’d that come from? That was AWESOME.

I still don’t get “Nobody puts Baby in a corner.”
That’s the big, famous line from this movie, and it kind of comes out of nowhere. Having now seen the movie it still doesn’t entirely make sense to me. Baby is sitting with her family up against the wall and a perpendicular support post. It’s not really a corner. But leaving aside that technicality, we also never see a part where someone goes “Hey, Baby! You sit there!” or “Here’s where I’m putting you!” For all we or Johnny knows, she put herself in that “corner.”

I just don’t understand why this became the big famous Swayze line, when this line is also in the movie:

“You just put your pickle on the plate, college boy, and leave the hard stuff to me.”

To say nothing of this: “Last month I’m eating jujubees to stay alive and this month women are stuffin’ diamonds in my pockets.”

(Most of) the music is great.
There’s nothing wrong with having affection for the glossy sounds of “She’s Like the Wind” or “Time of My Life,” but those songs are guilty-pleasure schmaltz. I’m not going to pretend I don’t sing along whenever “Hungry Eyes” plays in the mall, but I’m not going to pretend to be proud of it either. But the actual songs from the 60’s that made the cut are absolute classics. “In the Still of the Night,” “Be My Baby,” “Stay,” “You Don’t Own Me.” I mean come on. You can’t go wrong with tunes like that. Dirty Dancing is dopey, charming, dopey, and packed with great tunes and an infectious spirit of fun. Should make for a pretty great night of theater.