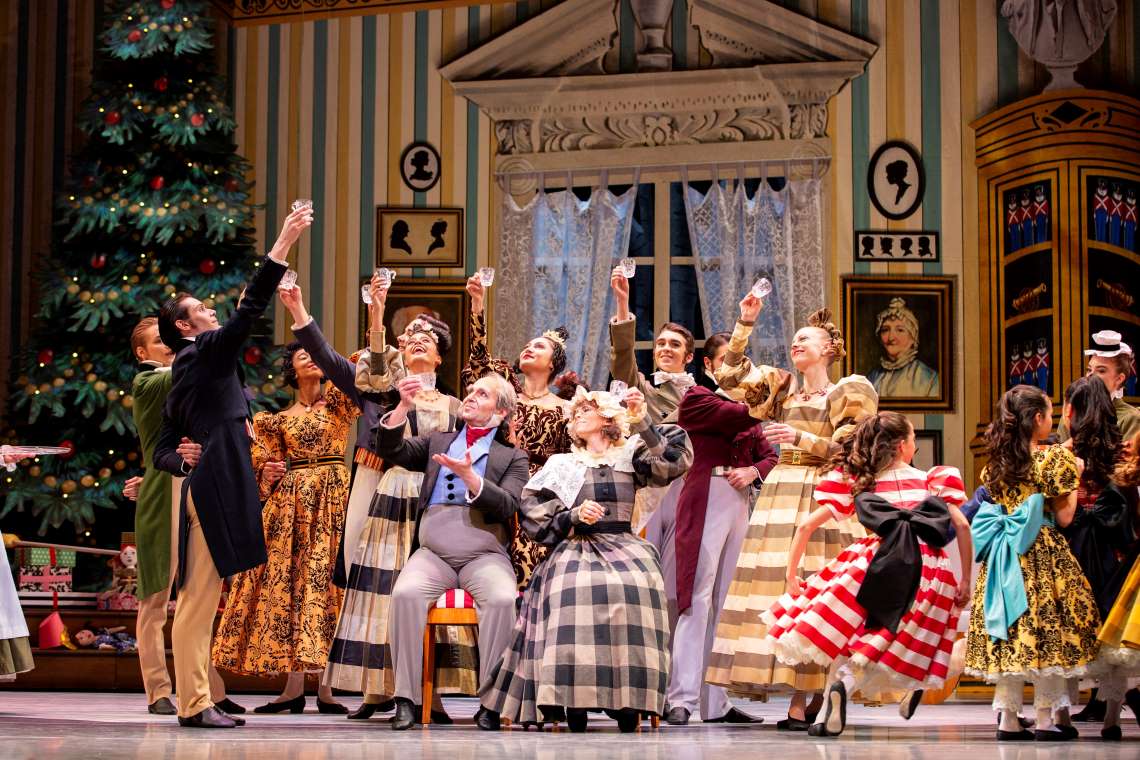 As we settle into shorter days, performing arts organizations across Seattle are finding ways to bring joy to the region’s lengthening nights. And, much like the twinkling lights that decorate the downtown retail district, these arts organizations are doing this by bringing holiday cheer to audiences all month long.

When I sat down to speak with A Christmas Carol Director Kelly Kitchens in September, she was already in the holiday mood. After directing Christmastown at Seattle Public Theater for the last four years and The Santaland Diaries before that, prepping for a Christmas show before fall officially starts, feels natural. “For me, this is when you actually start thinking about the holidays,” Kitchens said. “It’s the most wonderful time of the year.”

Kitchens stepped away from her co-artistic director role at Seattle Public Theater just after Labor Day in order to pursue a full slate of freelance directing opportunities, both in Seattle and nationally. Directing A Christmas Carol at A Contemporary Theatre (ACT) is the first directing opportunity in this new phase of her career.

“I’m excited about not just joining the Christmas Carol family of the humans in the room and the production team and all of this, but the family at ACT has been so—” Kitchens corrected herself, “the staff. I call them family because it feels so warm and open. They’ve just thrown their doors and arms open to me and have been generous with their time and with their expertise around the story. Because it is such a tradition.”

After directing at nearly every theatre in town, A Christmas Carol marks Kitchens’ first time directing at ACT. So it’s great to hear that the experience has been a wonderful one thus far. “I can’t describe how welcoming that place is,” Kitchens said. “And when I have an idea, the way we walk through what that means and how to make it work. I’m excited about that level of collaboration. I’m having the time of my life.”

Midway through our conversation, Kitchens pulled out a facsimile of the original A Christmas Carol manuscript from 1843, bound, fittingly, in a holly red cover. “I’m fascinated with the source material,” Kitchens said.

And then she showed me the dedication: “My own, and only, MS of the Book. Charles Dickens.”

When Charles Dickens set out to write A Christmas Carol, he was an artist in desperate need of a paycheck. And yet, as Kitchens read sections of the preface out loud, haunting phrases kept jumping out. “This ghostly little book.” “This ghost of an idea.” And yet that “little” ghost story went on to become one of the most well-known Christmas stories of the western world, one whose social commentary continues to resonate.

“I totally understand Mrs. Cratchit’s point of view,” Kitchens said. “When you see your sweet child failing. And I also think about how many children Mrs. Cratchit buried already. They have no health care. They’re struggling. And it’s not because they’re not working hard. And I think about whatever the Christmas goose is for people right next door to me. There are people who are going to be hungry and cold. And some of them will be working hard and working long hours. And that’s because of systems that are in place.”

Kitchens reflected on what a wonderful tradition A Christmas Carol is for so many Seattle families—especially for those who choose to make this show their Christmas gift to each other. “I’m delighted to be part of that tradition,” Kitchens said. “It’s an honor and a responsibility to tell this story, and to do it justice.”

As Seattle Men’s Chorus Conductor and Artistic Director Paul Caldwell gears up for his fourth holiday concert with the chorus, what he’s most looking forward to is the audience. “Seattle audiences are kind of rabid fans,” Caldwell said. “They bring a level of excitement to the concert hall that most cities reserve for the sports arena.”

One of his favorite memories comes from last year’s holiday concert. The Village People had released a Christmas album earlier that year, and the Seattle Men’s Chorus (SMC) was excited to perform holiday music that intersected with their LGBTQAI+ mission.

“They rewrote all of their big hits with Christmas words,” Caldwell explained. “So, ‘YMCA’ became ‘NOEL.’ And I got the audience on their feet and they were dancing in the aisle the whole time. There was just no way to not be absolutely thrilled with what was happening because the audience was just so energetic and so excited.”

‘Tis the Season is being billed as a “naughty and nice” holiday tradition and Caldwell is thrilled that the Seattle Men’s Chorus has the opportunity to do both in the same concert. “It’s ravishing and heart melting and everything you would expect from a men’s chorus of 250 people singing together,” Caldwell said. “It’s just gorgeous. And that’s the nice part. The naughty part is there’s always a lot of fun and frivolity. There’s this Ella Fitzgerald song we’re doing called ‘Santa Claus Got Stuck in my Chimney.’ It’s nothing but absolute fun.”

Caldwell also hinted at all 250 members of the chorus dressing up as fruitcake. “We don’t take ourselves completely seriously,” he said.

And as we talked through the music that SMC is performing this year, Caldwell drew special attention to their Hanukkah selections. This year, the chorus will be performing songs that Woody Guthrie wrote in collaboration with his mother-in-law, the Yiddish poet Aliza Greenblatt, in order to teach his children about their Jewish heritage and culture. Despite the festive Hanukkah subject matter, the songs are very much rooted in the folk music tradition.

“It almost slaps you in the face, the juxtaposition of the style and the content of the text,” Caldwell said. “It’s a real treasure and I’m really proud to put it on the stage. It is a Jewish didactic work and it is also in the style of clogging and square dancing. It ends up being not one or the other, but both. I don’t know if everyone will particularly get it, but the performers know it’s there and we treasure it because it’s rich in its history.”

And it’s intersectional, which is part of what makes SMC such a wonderful part of our arts community.

When I sat down to speak with Pacific Northwest Ballet Artistic Director Peter Boal about George Balanchine’s The Nutcracker®, the first memory that popped into his mind was running into a family in the Seattle Center garage at 7:15 p.m. before a 7:30 p.m. curtain. They stopped him to tell him how much they loved The Nutcracker. Boal was confused; the show hadn’t yet begun. “And they said, ‘Oh no, we went to the matinee,’” Boal remembers. “‘We’ve just been in the lobby the whole time.’ They were done at four o’clock and they spent three hours in the lobby. But I think people just love it.”

For Boal, watching his audiences get swept up in the experience of attending the ballet, taking Christmas card photos in the lobby and reveling in the decorations, is a beautiful form of entertainment in itself.

In a way, The Nutcracker is Boal’s way of bringing a personal holiday tradition to the city of Seattle. Boal’s first professional role was dancing in The Nutcracker party scene as a young boy, alongside the dancer responsible for restaging George Balanchine’s choreography for Pacific Northwest Ballet (PNB), Judith Fugate.

“We did the Sugar Plum Fairy and the Cavalier together for many years at the New York City Ballet,” Boal said. “It’s funny. When we started staging the pas de deux [for PNB], there were little places where I would nudge her forward and pull up on a hand and she was like ‘Oh, I forgot that. I forgot how much that helps me with my next step.’ And it was really fun. We were two more than middle-aged people standing in the rehearsal room, remembering how we used to dance.”

Fugate lives in Las Vegas now, but as we talked on the phone, I felt like I’d been transported to that same rehearsal room. “Peter and I have been good friends for a very long time, so any time he invites me to Seattle to work with the company, I always say yes,” Fugate said. “You know, at the time, many of the young boys in The Nutcracker were played by young girls. So I distinctly remember the fact that there happened to be an actual young boy playing my son. And I remember the man who took care of the men’s wardrobe—his name was Ducky—bringing Peter Boal to the stage before the performance and saying ‘Here’s yours, Judy. She’ll take care of you the rest of the way.’ And sure enough, many years later, here we are.”

Fugate was 17 years old, in her first year dancing as a company member of the New York City Ballet. Boal was nine years old.

It’s a ballet that’s lived with Fugate for most of her life, starting with her first performance as Clara at eight years old. And while The Nutcracker, and her time dancing with George Balanchine, who she affectionately calls “Mr. B,” continues to be a large part of her life, Fugate is always thinking about her audience, “It can be a child’s first introduction to live theatre—or even the ballet itself. And many adults choose to go to The Nutcracker to see if they even like ballet. The energy of the auditorium is very unique. It’s maybe one chance in the year that a family actually has an outing together. It’s a very special occasion. Not to mention, it’s also the holiday season, which already adds to the excitement.”

And with so many entertainment options out there—live music, theatre and streaming services at home, just to name a few—the fact that so many audience members actively make the decision to see The Nutcracker each year is something that Boal never takes for granted.

“The process starts long before they get to the theatre,” Boal said. “Whatever they choose to wear, what time they’re leaving the house, where they’re eating—the whole thing. And at the end of the day, we’re asking people to pay an amount you can’t ignore, for tickets. It’s a high ticket price for many people. But that person I met in the garage at 7:15 p.m. after a matinee—they didn’t question what they had invested. They got a whole day, and it was going to stick with them for a long, long time.”

And it’s those audience experiences that make it all worthwhile.

A Christmas Carol runs November 29 to December 28 at ACT Theatre. Tickets are available online or by calling the box office at 206.292.7676.

The Seattle Men’s Chorus’ concert ‘Tis the Season runs November 30 to December 22 at Benaroya Hall, the Rialto Theater in Tacoma and the Everett Civic Auditorium. Tickets are available online or by calling the box office at 206.388.1400.

George Balanchine’s The Nutcracker® runs November 29 to December 28 at the Pacific Northwest Ballet. Tickets are available online or by calling the box office at 206.441.2424.