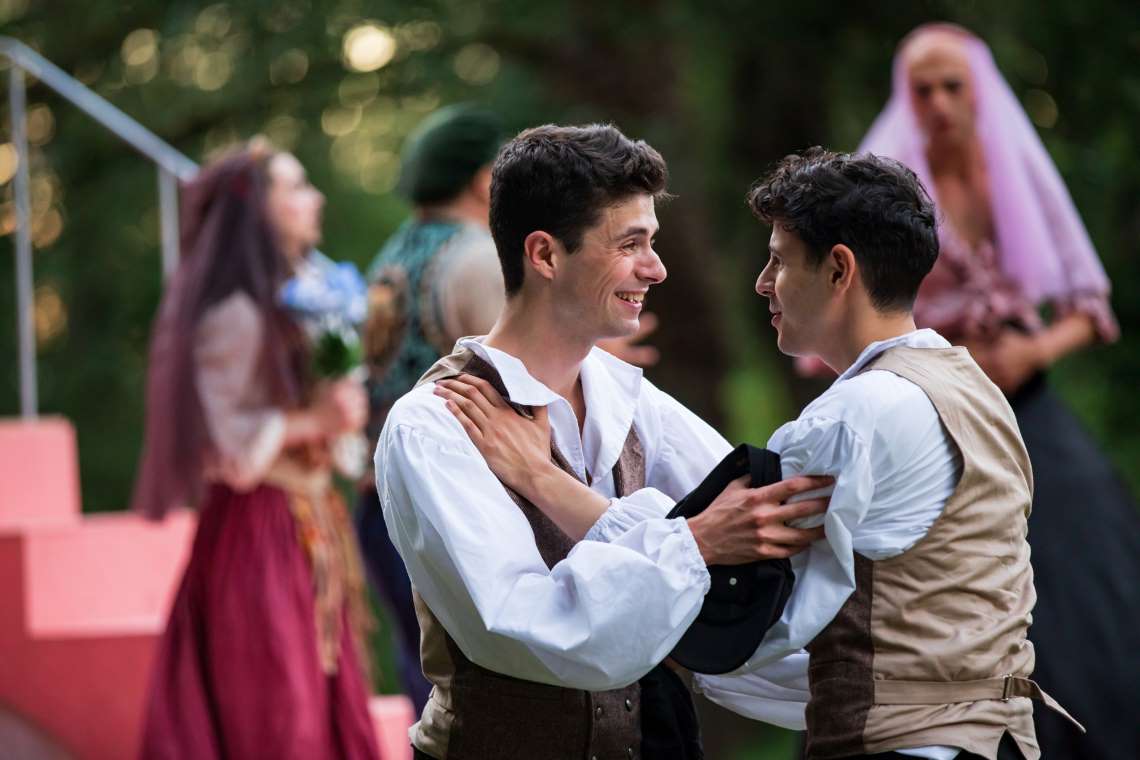 Andy Walker as Sebastian and Michael Monicatti as Viola in 'Twelfth Night.' Photo by HMMM Productions

Gender-fluid casting in Wooden O’s Twelfth Night and Romeo and Juliet gives the audience a fresh interpretation of the Bard’s venerated works, by taking the focus off gender.

Shakespeare’s plays have been performed for the last four hundred years; so long that they have become part of the basis of the canon of Western literature. So how do theatre companies make them relevant and interesting for modern audiences? One of the answers, for Seattle Shakespeare Company at least, is gender-fluid casting.

This summer, Wooden O—Seattle Shakespeare’s Shakespeare in the park program—is performing Twelfth Night (a comedy about love and mistaken identity) with an all-male cast, and Romeo and Juliet (the classic, tragic tale of star-crossed lovers) with a cast made up of female and nonbinary actors. This isn’t exactly a new direction for Seattle Shakespeare; in 2018 they partnered with upstart crow collective (a company that performs classical plays with female and nonbinary casts) to put on Richard III. But it is a little bit of a big deal for Wooden O, which tends toward more traditional, consistently crowd-pleasing productions rather than the edgier, higher-budget plays the company does year-round.

Leah Adcock-Starr, director of Romeo and Juliet, has the intention of giving people who wouldn’t have been allowed to act on the Shakespearean stage (women, nonbinary people, people of color) a space to do so. “There’s a certain kind of hunger,” she says, “in people who haven’t been invited—or challenged—to play these roles.” For her, it’s important to expand the way we look at Shakespeare.

His plays have been consistently performed for centuries but, as Mary Machala, director of Twelfth Night, says, “the truth is that he was writing for men, not women.” Even though women have been playing roles in Shakespeare’s plays for a long time (the actor Sarah Bernhardt played Hamlet in 1899), there’s something powerful in female and nonbinary actors claiming the historically all-male stage as their own.

“Shakespeare said that in theatre we hold a mirror up to nature,” says Adcock-Starr. She elaborates on that thought with the belief that theatre should hold up the best possible mirror to nature. One of the reasons Shakespeare is still relevant for her, is that there’s a large percentage of people (basically everyone who isn’t a cis, white, able-bodied man) who have spent hundreds of years not having plays written for them. It’s theatre’s job as the holder of the mirror, to show the rest of the world people who look like them, who feel things and love each other, and are a part of the universal Shakespearean idea of human nature.

Where Adcock-Starr is expanding the Shakespearean canon for people who haven’t historically been invited to play within it, Machala is going back to the roots of the text to find something true at the heart of it. She had seen productions of Twelfth Night before, but they were never as funny as she thought they could be—until the Shakespeare’s Globe all-male production in 2002. After seeing it, Machala set out on a quest to figure out what about that casting choice made the play more intriguing to her. What she found was an absence of the tension she knew from directing casts with men and women. That tension, whether it was about sex or power dynamics or gender politics, didn’t seem to be present in the all-male cast.

The play exists in a space that isn’t about time, or gender; it’s about the words this playwright wrote…

Working with an all-male cast for this production has helped Machala and her cast get closer to Shakespeare’s original intentions. “With Shakespeare it’s all about the language,” she says, “and the character comes from the language.” Casting the play in more or less the same way it would’ve been in Shakespeare’s time allows Machala to get beyond gender in a way. Seeing men onstage has been normalized, in part due to Shakespeare—when plays are written with men in mind and then society goes along with that for a long time, it can be hard to move past that as the default.

However, playing to that normalization means Machala can get deeper into the text. We have continued to perform Shakespeare’s plays for so long, not just because they’re part of an established canon, but because there’s something eternal at the center of them—an idea Shakespeare put into words about the way humans feel. Machala is taking advantage of her cast of male actors and the timeless setting of the parks to go beyond our modern ideas about gender and sexuality and tap into that eternal, true thing. The play exists in a space that isn’t about time, or gender; it’s about the words this playwright wrote that have been beautiful and meaningful for four hundred years and continue to be today.

However, as Adcock-Starr points out, Shakespeare was one of the earliest great queer playwrights. Whether or not he himself was queer (although he wrote sonnets to both women and men), the fact that he was writing only for men is inherently not-straight. Shakespeare’s plays are built on a base of queer desire and Twelfth Night, a play about gender and desire, is especially representative of that.

Machala says the all-male cast has a way of stripping away the queer desire aspect of the story: “It’s more about the mistaken identity, and less about the gender. It’s about how [Viola] is not who she is, and that is the bigger issue.”

With Wooden O’s productions this summer, Shakespeare is not just a man who wrote plays four hundred years ago. These productions focus on the deep human connection of his plays, and combined with their traditional/non-traditional casting, they expand and light up these old and beautiful plays for a modern audience.

Seattle Shakespeare’s free Wooden O productions of Twelfth Night and Romeo and Juliet are now playing through August 11 at various parks throughout the Puget Sound area. The full schedule can be found on their website.

Lark Keteyian is a teenager who’s written a lot of words, including plays that have been performed by 14/48:HS and their own theatre company, and arts reviews for TeenTix’s Press Corps. They’re excited about theatre, old books and ghosts.