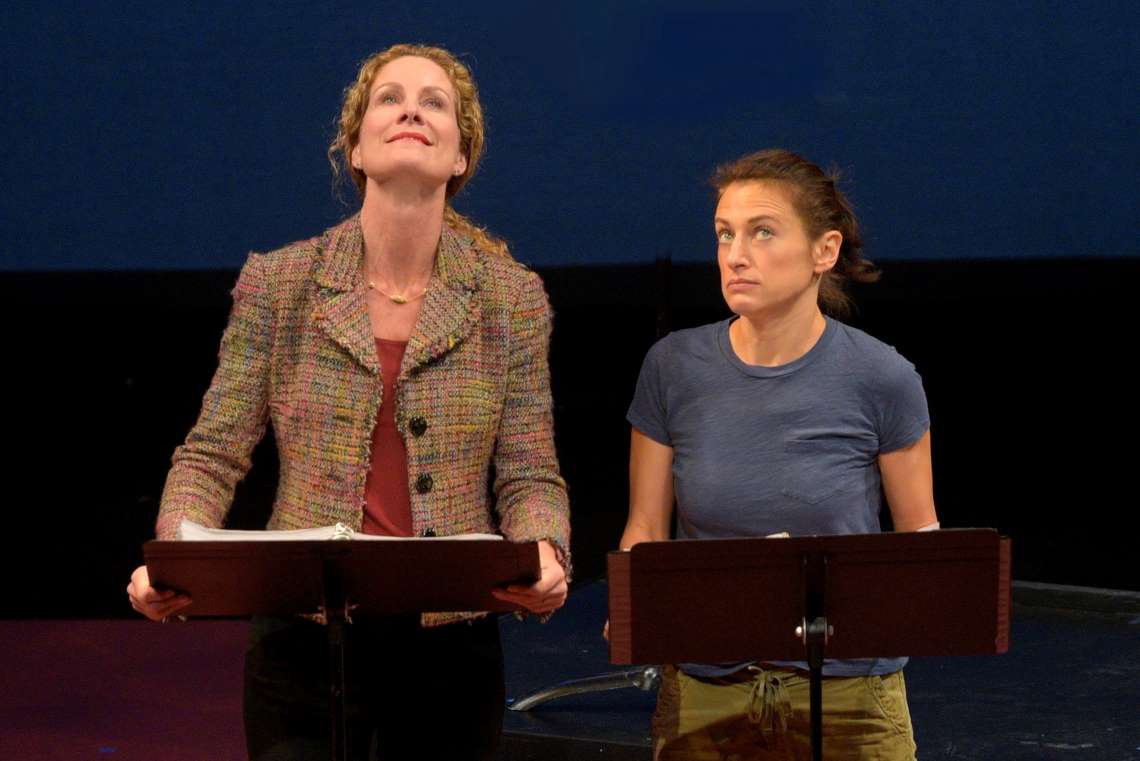 Marcia Pizzo and Sarah Mitchell in a reading of 'They Promised Her the Moon' at the 2018 New Works Festival. Photo by Kevin Berne

This August, where do you see yourself? The possibilities are endless. With warm weather and long days, the outdoors are a constant temptation calling you away from the office (literal or otherwise). Even if outdoor activities aren’t your predilection, there are summer blockbuster movies, arts and culture festivals, and family vacations (or obligations, depending on your view).

But if you’re a theatre enthusiast your answer will probably be a little different; that’s because August is also the time for TheatreWorks’ New Works Festival. Now in its 18th year, the Festival has become an “artistic highlight of the summer.” For two weeks (August 9–18) the Lucie Stern Theatre in Palo Alto will host “script-in-hand” readings of five new musicals and plays, a panel with the artists, and a keynote address.

The five pieces chosen for the Festival are in the early stages of development and the readings offer audiences the chance to go behind-the-scenes, to see how a play or musical is workshopped. Shows that have had their first appearance at the Festival have gone on to great success on Broadway and off, such as Tony Award-winning Memphis and Obie Award-winning Describe the Night. And many, including Jane Austen’s Emma and The Four Immigrants, have become TheatreWorks hits. This season, TheatreWorks will stage the Northern California premiere of They Promised Her the Moon which debuted at last year’s Festival.

This year, the New Works Festival offers audiences two musicals and three plays to enjoy, discuss and make predictions about. Here’s a summary of what will be showcased:

The authors of Broadway’s Tuck Everlasting spin a romantic musical drama across the vast prairies of 19th century Nebraska.

Weaving past and present, this poignant new musical explores a haunting legacy of racism buried but not forgotten.

Nan, and the Lower Body (The Pap Smear Play)

In this frank and feminist play, good-humored Dr. Pap has great mysteries to unravel and a bright assistant with dark secrets to hide.

With a Noises Off flair, this door-slamming romp sets old-school against new-wave in a hilarious quest for royalty and relevance.

In this funny, warm-hearted, and wonderfully human play about lovers, fathers, daughters and the fragile bonds between them, two actors play very different generations in the same family.

They Promised Her the Moon will play March 4–29 at Lucie Stern Theatre. Tickets are available online.