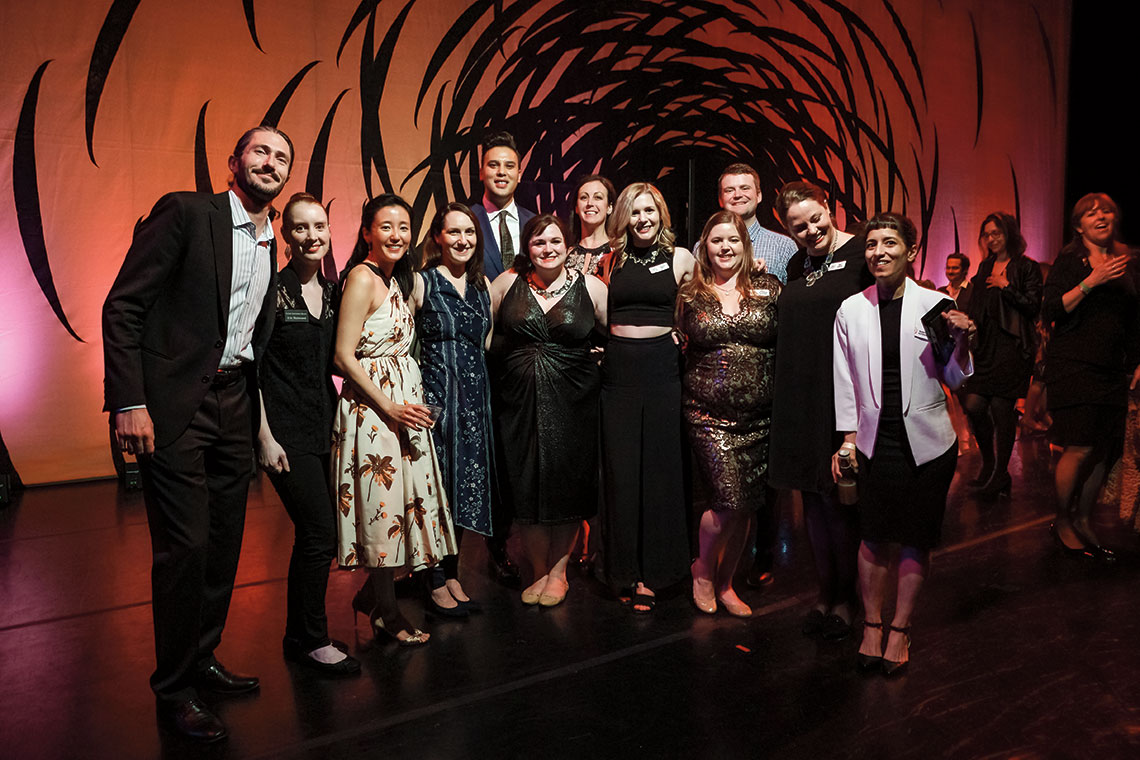 Young Patrons Circle Board of Directors at last season’s Backstage Bash. Backstage Bash is an annual celebration that takes place backstage after a performance and includes live entertainment and dancing. Photo by Alan Albastro Photography

When you think about the board that supports your favorite performing arts organization chances are you’re picturing an older sect—folks who are established in their careers, have saved for retirement and have money to spare. It’s a group, when imagined this way, that’s difficult to join and impossible to keep up with. But what if I were to tell you that performing arts boards come in all shapes and sizes, and that some are even actively recruiting young people into their fold? I had the pleasure of speaking with members of the BRAVO! Council at Seattle Opera, Young Patrons Circle at Pacific Northwest Ballet and New Guard at TeenTix—three organizations that are not only recruiting Millennial and Generation Z board members, they’re also training the next generation of arts advocates.

In 1996, Seattle Opera founded BRAVO!, a young professionals group aimed at audience members ages 21 to 39. For an annual fee of $79, BRAVO! members receive discounted opera tickets, invites to year-round social events and access to an exclusive intermission lounge, complete with complimentary wine and coffee. Now in its twenty-second year, BRAVO! is one of the largest organizations of its kind nationwide.

But BRAVO! would be nowhere without its council members. Nine dedicated young professionals run this leadership board with the mission to make opera an integral and rewarding part of their peers’ lives.

BRAVO! Council member Evan Bennett has been an opera fan nearly half his life. The 32-year-old joined BRAVO! a year ago, after leaving a position in the opera’s community engagement department.

“The first thing I did once I left my position was to join BRAVO! as a member,” Bennett said. This year marks his first season as a BRAVO! Council member. “I genuinely love the art form and joining Council is a meaningful way for me to help get people my age involved in a centuries-old tradition.”

It’s an art form that Bennett and the rest of the BRAVO! Council are passionate about—one that still resonates with audiences today.

“You certainly don’t need a music degree to be a part of this group,” Bennett joked, nodding to his own background in music performance and as an employee of Seattle Opera. “Everyone on the council has come to opera in different ways. This diversity of experience has been an excellent catalyst for innovation around how to get people in their twenties and thirties involved in the art form.”

Young professionals groups are cropping up at performing arts organizations across the country, but Seattle Opera credits the vitality of BRAVO! to its council members.

“… folks under 40 years old are not only a growing demographic in Seattle Opera audiences but also a growing donor base.”

“BRAVO! has over 800 members and almost all of them are season ticket holders,” said Kristina Murti, director of marketing and communications at Seattle Opera. Murti credits council members like Bennett and Eoin Hudson, BRAVO! Council president, for this conversion rate. “Our council is very active in programming events and bringing in their own professional and personal networks to try out opera.”

The numbers don’t lie. Hudson joined the leadership council in 2013 and since that time BRAVO! membership has more than doubled—it had less than 400 members when he joined.

“In that time there’s been a lot of change—at the opera and in Seattle,” Hudson said. The change he’s most excited about is the fact that folks under 40 years old are not only a growing demographic in Seattle Opera audiences but also a growing donor base. “It’s exciting to see the art form being embraced by my generation and watching the preconceptions about opera shift.”

When I asked Hudson which opera he was most looking forward to this season, he named Benjamin Britten’s The Turn of the Screw. The ghost story will be performed in October, just in time for Halloween.

Seattle Opera patrons interested in joining BRAVO! or the BRAVO! Council can learn more at seattleopera.org.

Seattle Opera isn’t the only arts organization prompting their young audience members to get involved in the world of non-profit board leadership. For $60 a year, Pacific Northwest Ballet audience members ages 21 to 39 can enroll in the Young Patrons Circle, a social and educational group that offers ticket discounts, ballet after–parties and the collective sponsorship of an original piece of choreography at Pacific Northwest Ballet’s annual NEXT STEP performance.

A fifteen-member board of directors serves as leadership liaisons for the Young Patrons Circle with the mission of supporting and engaging this new generation of ballet audiences.

Meeka Charles was wrapping up her first year as board chair when we spoke. In addition to growing the Pacific Northwest Ballet audience, Charles has worked with the board to develop the ballet’s marketing and social media campaigns. Ballet has been a part of her life for over twenty-five years.

“I grew up overseas and moved often,” Charles said. “Attending ballet was something my mother and I did together no matter where we lived. When I moved to Seattle, buying ballet tickets was one of the first things I did. For me, attending the ballet makes a new place feel like home.”

Charles added that she loves engaging her peers in ballet. It’s the reason she joined the board.

“I was a ballet student and amateur dancer from early childhood into early adulthood,” Yamada said, sharing that she studied at Pacific Northwest Ballet for six of those years. “I got to perform in The Nutcracker, which I loved. I’ve always admired the incredible company dancers.”

In the years since her Nutcracker performance, Yamada has lived all over the world and has always made ballet attendance a priority.

“I can see why Pacific Northwest Ballet has such a reputation for excellence in the global dance community,” Yamada shared. “It was an easy decision to become a subscriber when I moved back to Seattle.”

During her upcoming year as chair of the board of directors, Yamada is hoping to expand Young Patrons Circle’s relationship with not only young patrons, but also other young professionals groups across Seattle. And, of course, continue the board’s work hosting events tailored to the interests and needs of Young Patrons Circle members.

Pacific Northwest Ballet audience members interested in joining Young Patrons Circle and its corresponding board of directors can learn more at www.pnb.org.

Thirteen– to nineteen–year–olds across Seattle and Tacoma know that TeenTix is the performing arts organization to join. For the duration of their teenage years, TeenTix members are eligible for $5 day-of tickets to arts organizations across the region. The organization is supported by a passionate staff and two boards—an advisory council and The New Guard Leadership Board, an eight-member board made up entirely of TeenTix members.

Neha Gupta joined the New Guard because she wanted to strengthen her leadership and public speaking skills. She fell in love with TeenTix because it gave her the opportunity to see theatre and attend museums without worrying about each organization’s price point. She still loves seeing as much theatre as she can, but it’s the people that make Gupta’s work worthwhile.

“The New Guard Leadership Board is the home of some of the most talented, inspirational and kind-hearted individuals I have ever met,” Gupta said. She identifies as reliable, but shy. “The Leadership Board, as cheesy as it sounds, forced me to break out of my shell.”

This season, Gupta is taking over as the New Guard Director of Partnerships, working with TeenTix’s arts partners to organize events and strengthen their bond with the teen community.

Isabel Schmidt joined the New Guard Leadership Board because she was eager to connect with arts lovers in her peer group. Schmidt became a member of TeenTix as soon as she was eligible but took advantage of TeenTix’s 2-for-$10 days as her friends’ plus one in the years leading up to her thirteenth birthday. She’s going on her fourth year as a member of the New Guard, this time as the board’s president.

“My favorite thing I’ve done on the New Guard has been giving advice to arts organizations in the city who are interested in highlighting youth voices and want advice on how to reach this important group of audience members,” Schmidt said. “I appreciate being valued as an arts-goer. As we say at TeenTix, teens know what teens want.”

Schmidt also loves having thought–provoking conversations with her peers and TeenTix’s arts partners about what arts access really means. When she’s not serving on the New Guard—and going to high school—Schmidt enjoys playing cello. She cited Seattle Symphony’s upcoming Octave 9 space, an immersive performance and community space in the heart of downtown Seattle, as a place to watch.

“I’m looking forward to Seattle Opera’s coming season,” Schmidt said. “There are a lot of impressive shows coming up!”

Watch out, BRAVO! Council, Isabel Schmidt might be coming for your job.

TeenTix members interested in joining The New Guard Leadership Board can learn more at teentix.org.

Whether you’re a teen, a twenty-something or solidly in your thirties, chances are there’s a place for you on a performing arts board here in Seattle. The first step is to show up. We’ll let you take it from there.

Danielle Mohlman is a nationally produced feminist playwright based in Seattle. Her play Nexus is among the 2015 Honorable Mentions on The Kilroys list. She is an alumnus of the inaugural class of Playwrights’ Arena at Arena Stage and a member of the 2018 Umbrella Project Writers Group.

Our Favorite Ticket Deals for Folks Under 40

Not ready to join one of the boards profiled? There are still plenty of opportunities to see theatre, dance and opera at an affordable price. Here are some of our favorites.

The Pointe is Pacific Northwest Ballet’s email list for audience members ages 20 to 40. Throughout the year, The Pointe sends out discounts ranging from $15 balcony seats to 50% off any seat in McCaw Hall.

MySymphony is Seattle Symphony’s free program for patrons ages 21 to 39. Members are eligible for $25 tickets to performances at Benaroya Hall.