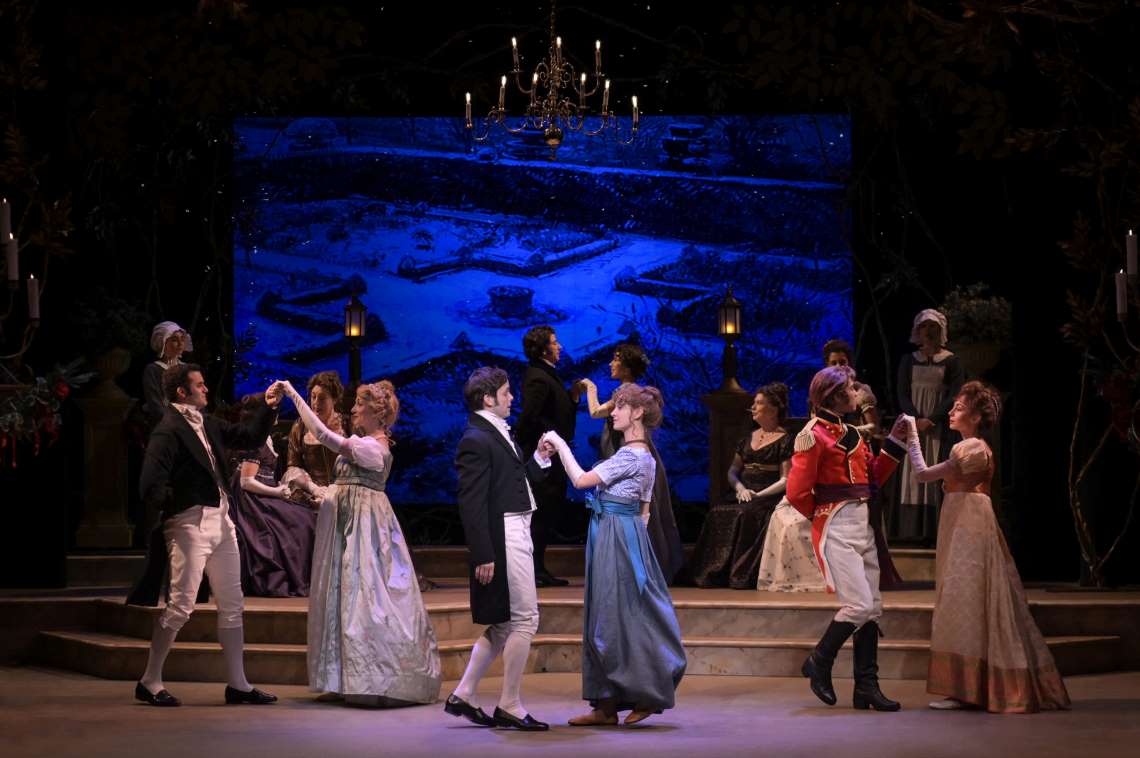 Cast of 'Pride and Prejudice' at TheatreWorks Silicon Valley. Photo by Kevin Berne

Spending time together with friends and family is at the center of so many holiday traditions. Whether you’re singing along with Andy Williams about the most wonderful time of the year or marveling at the twinkling lights woven through neighborhood branches—lights that seem to have gone up overnight—the region is full of loved ones creating new traditions and maintaining old ones.

Theatres across the Bay Area are inviting families to create new traditions and share in the gift of theatre this year. I spoke with theatre makers at the American Conservatory Theater (A.C.T.), Berkeley Repertory Theatre and TheatreWorks Silicon Valley about how they celebrate holiday traditions and why hope speaks volumes, especially on stage.

For Peter J. Kuo, A.C.T.’s associate conservatory director and co-director of this year’s production of A Christmas Carol, the art of bringing this classic story to life is deeply rooted in tradition. The adaptation was created by former Artistic Director Carey Perloff, who not only adapted the play 15 years ago, but also directed it for the first few seasons before bestowing the direction to Domenique Lozano. Kuo is the third director to tackle this particular adaptation.

“So it’s this really interesting way to see how tradition is getting passed from generation to generation,” Kuo said. “One of the great traditions of this story has been one about the spirit of generosity, and that very much sits in this production.”

Kuo added that his inheritance of the production is part of that generous tradition, but that this intergenerational motif extends far beyond direction. Three core companies make up the cast of A Christmas Carol: the professional acting company of Equity actors, the Master of Fine Arts (M.F.A.) students who are in their final year of their degree, and the young actors who are part of the Young Conservatory, ranging in age from 8 to 19 years old.

“I see the production itself as one of generation and how we pass down generosity,” Kuo said. “One of the traditions of the piece, aside from this intergenerational mix of students and professional actors, is the mentorship that happens within the company. Each principal actor mentors one M.F.A. actor. And each M.F.A. actor mentors two Young [Conservatory] actors.”

The company is comprised of a staggering 46 actors, a fact Kuo quickly follows by acknowledging his “lovely assistant director” Andrea van den Boogaard and his “amazing stage management team.”

“We’re still massively outnumbered by the cast,” Kuo said. “Especially by the Young Conservatory.” But it’s an out numbering that clearly brings Kuo a lot of joy.

Our conversation was at a pivotal point in the process. Kuo had just moved from the play’s more intimate small cast scenes to the final scene of the play. It’s a scene that includes the entire cast, and all the chaotic energy that comes with that.

“There’s a buzz going on,” Kuo said, recalling that particular rehearsal. “We’re back in the village, we’re mapping the town. So, there’s a lot of people who are crossing back and forth—who are running Christmas day errands. And I’m encouraging everyone to think: What is your story? You’re carrying this crate. Where are you carrying this crate to? And there’s all this buzz of trying to figure out and trying to learn, which is great. I love a learning space. And having these mentors helps disperse some of the learning and the teaching in the moment, which is really nice. It kind of takes the burden off me from having to create every single moment and empowers them to create something for themselves.”

And while the text of the play remains the same from year to year, Kuo is letting his own lens shine through. “It’s been a conversation with the actors about what depths of humanity haven’t been explored yet,” Kuo said. “We’re really looking at who Scrooge is and his relationship to all these different people around him—how he relates to money and poverty. And to me that conversation has richly opened up to what is going on in our own society, especially in the Bay Area where we’re seeing a strong wealth gap between the tech boom and those who are living on the street. Having everyone dissect that and discuss that helps us find a richer purpose to the story.”

The Tale of Despereaux might not seem on its surface like a holiday show, but it’s the universal themes of courage, community and bravery that attracted PigPen Theatre Co., currently in residence at Berkeley Repertory Theatre, to the source material in the first place—themes that they see as perfect for the entire family.

“The stories that we perform on stage have always resonated with a very wide range of age groups,” said Arya Shahi, one of the seven members of PigPen Theatre Co. “We deal with folk, we deal with fairytale. But we also started writing our shows when we were in our early 20s and really wanted to entertain our friends. So we started to write in a tone of voice that was insightful, but also comic and witty and charming in a way.”

And it’s a tone of voice that’s stuck with them for the last 12 years. Shahi, who serves as the company’s percussionist among other roles, said that PigPen has always been big fans of family-friendly storytelling, modeling their structure off Disney, Pixar and Universal Studios. When Universal approached the company about adapting The Tale of Despereaux into a stage musical, it felt like the perfect fit.

“Despereaux is this incredible mouse obsessed with this honey sound,” Shahi shared, by way of explanation. “The way he hears the world is very different from other people. And that helped open up our music in certain ways. And then Chiaroscuro, the rat, is called to the light from a place of darkness and shadow, so all the shadow puppetry that we like to work with found a home in the story quite naturally.”

Dan Weschler, PigPen’s accordionist, was initially attracted to The Tale of Despereaux because it depicts a classic hero’s journey, with a twist. The musical takes the familiar fairytale structure of a knight rescuing a princess from a dragon and interrogates the tropes within that form.

“It shows the various boons and pitfalls that come from modeling your behavior off a story like that,” Weschler said. “But it also has a plurality of heroes. And we really appreciated the spirit of people working hard to see past the architypes they’re given.”

Because The Tale of Despereaux runs from Thanksgiving until New Year’s, I asked the guys (as they affectionately call themselves on the PigPen website) if they had any holiday traditions they were looking forward to celebrating as a company. Ben Ferguson, who plays resonator guitar, shared that he’s looking forward to spending time with his fellow company members and their families.

“Our family’s grown seven-fold over the last 10 years or so,” Ferguson said. “We’ve been able to spend Thanksgiving with a fair number of each other’s families. And it kind of feels like a weird tradition to be gone from home but still with your family—even though you’re not related to them. So that’s something that I’m extremely excited to do again.”

And then there was a lovely silence before Weschler and Shahi jostled to tell Ferguson how beautiful that statement was. Some theatre companies are quick to say that they’re one big happy family, but for PigPen Theatre Co., nothing could be closer to the truth.

For TheatreWorks Silicon Valley Artistic Director Robert Kelley, directing a world premiere musical adaptation of Pride and Prejudice, with book, music and lyrics by longtime collaborator Paul Gordon, is not only a holiday celebration, it’s a farewell to this theatre.

“I love this show,” Kelley said. “I love directing it. And this is my last world premiere as the artistic director. At the moment, this is the last thing for me in the context of my 50 years at TheatreWorks. So I really am pouring my heart and soul into it—and I’m loving every minute of it.”

And it truly sounds like he is. He described one moment in the musical where the three-room home where the Bennets live is transformed into the lavish estate of Netherfield. “The way the show flows, it never stops,” Kelley said, reveling in the puzzle that is 15 distinct locations on a single stage. “Making that happen visually, with style and beauty and the requisite excitement has been one of the biggest challenges.”

Kelley’s aware that many of his audience members will be fans of the original novel by Jane Austen, and that he’ll have to convince them that this is “the ultimate Mr. Darcy and the ultimate Elizabeth Bennet.”

“This is possibly a spoiler alert,” Kelley said, aware that for some audience members, this will be their first encounter with the 1813 novel, “but I’ve had the most fun working on the Darcy and Elizabeth scenes. There’s the incredible scene where he proposes to her so horribly—badly and awkwardly—that there’s really no hope at all. And there’s another scene where he hands her a letter and tries to explain himself, and you have to see Elizabeth completely torn. She realizes that her preconceptions—or her prejudices, if you would—are not entirely true. And Darcy has to realize that his prejudices are not entirely true. There’s a lot of rejection, and yet the two of them are so attracted to each other. It’s a lovely acting challenge and it’s amazing fun for a director.”

After Kelley opens his holiday show each year, he takes some time off to go to the beach, a ritual he finds very calming and beautiful. “It’s a big family time,” Kelley said, alluding to Christmas day celebrations with his Bay Area relatives. “But the personal part of me likes to just watch the waves on the rocks for a few days.”

What a wonderful way to welcome in the new year.

A Christmas Carol runs now through December 24 at American Conservatory Theater (A.C.T.). Tickets can be purchased online or by calling 415.749.2228.

The Tale of Despereaux runs now through January 5 at Berkeley Repertory Theatre. Tickets can be purchased online or by calling 510.647.2949.

Pride and Prejudice runs now through January 4 at TheatreWorks Silicon Valley. Tickets can be purchased online or by calling 650.463.1960.