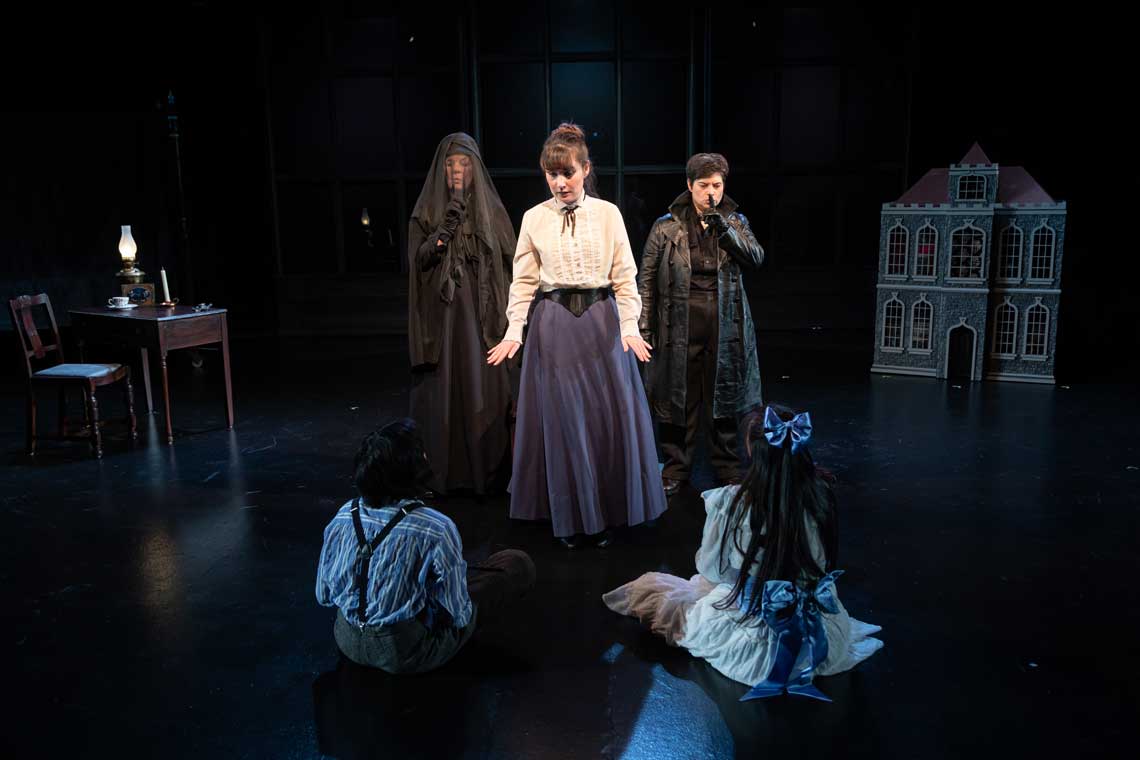 'The Turn of the Screw' ensemble at Book-It. Photo by Aaron Wheetman

Rachel Atkins has a long and wonderful history with Book-It Repertory Theatre. She spent several years as a teaching artist in the education department before writing her first play for the company, an adaptation of Rebecca by Daphne du Maurier, in 2005. Fifteen years later, almost to the day, Atkins will open The Turn of the Screw, an adaptation she’s been periodically pitching Book-It for years.

After simmering on the idea for several years, Atkins has found a way to make this Henry James novel wholly her own.

Danielle Mohlman: What drew you to The Turn of the Screw initially?

Rachel Atkins: There is something about this story where you read the whole thing and you never really know what’s going on. And everybody thinks something different is happening. I’ve talked to Carol Roscoe, who’s directing it, about how much her experience with this book has changed. She remembered what she thought was the truth of the story when she first read it in high school. And then reading it years later as an adult, she now thinks something completely different. And I think there’s just something really interesting about a story that leaves so much open for readers and audiences.

Even in the structure of his narrative—the frequency with which he uses pronouns but doesn’t identify who he’s talking about. What “he” does he mean in this sentence?  It could be anybody. And the challenge is: how do you take that and turn it into a play that people are still going to be able to understand and follow, but still leave some essence of that mystery?

And having to make some decisions, I’m sure, about who those pronouns belong to.

We’re speaking before the start of rehearsals. Is there a moment or character relationship that you’re looking forward to exploring in rehearsals?

There is, but I sort of don’t want to tell you because it’s part of the mystery of the story.

You don’t have to tell me.

I will say that one of the things that I had a lot of fun with was bringing in some other materials into the story. I mean, it’s a novella. It’s short. This may be the shortest mainstage Book-It production ever, just because it’s really tightened up. One thing I did was pull in other materials of songs and poems and things that the children would be reading or reciting or studying. I’ve tried to use that stuff to draw out more of the mysterious, weird creepiness of the story and what might be happening with these children.

That sounds so incredible and creepy.

I hope so. That’s what I’m going for.

Because some of those nursery rhymes from back in the day…

I got some creepy stuff in there, so we’ll see.

What excites you about working with this cast of Pacific Northwest actors?

I love that. And I loved seeing that echoed in the reading of This is Not (Y)Our History at Seattle Public Theater, where you had an all-female and non-binary cast playing both male and female roles.

Yeah, and for a totally different reason. With that piece, which is about the suffrage movement, it just feels like a women’s story. And I felt really strongly that not only would there be no men on stage, there would be no men involved in the production.

Of course, the women’s suffrage movement is a big topic right now as we approach the centennial. And I keep hearing about other projects that people are working on across the country. And every time, it’s either that men are writing it or men are in major artistic positions and I’m like “Come on, people. Let them tell their story!”

The Turn of the Screw runs February 12 to March 8 at Book-It Repertory Theatre. Tickets can be purchased online or by calling 206.216.0833.