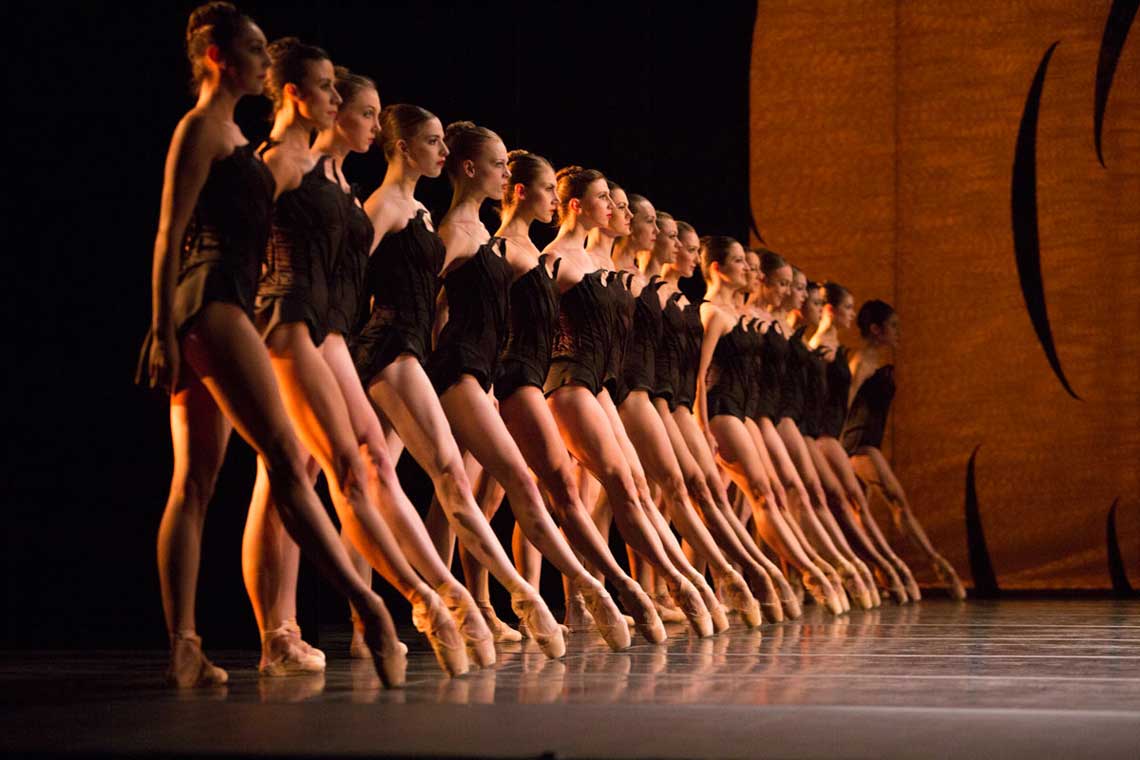 PNB company dancers in Crystal Pites 'Emergence,' which will be included in the 'Director's Choice' program. Photo by Angela Sterling

Today Pacific Northwest Ballet announced their 2020-21 season, which will include audience favorites Jewels, Roméo et Juliette, and Coppélia; world premieres from Jessica Lang and Alejandro Cerrudo; the PNB premiere of works by Penny Saunders, Twyla Tharp, and Christopher Wheeldon; and works by George Balanchine, Crystal Pite, and Alexei Ratmansky. This will be in addition to the holiday season staple, George Balanchine’s The Nutcracker®.

When glancing over the season, one name pops up again and again. While George Balanchine’s works are celebrated and performed at companies throughout the nation, Pacific Northwest Ballet has personal connections to the choreographer through Founding Artistic Directors Kent Stowell and Francia Russell, who studied under Balanchine at the New York City Ballet, as well as current Artistic Director Peter Boal who was featured in many Balanchine ballets during his own time dancing with the New York City Ballet.

Due to the company’s history with the choreographer, as well as the genius and accessibility of his work, it’s no surprise that he is heavily featured. This season we will see four works by the prolific choreographer: Jewels, The Nutcracker, Coppélia and Apollo (which will be included in the program Modern Hits).

In addition to Balanchine’s beloved works, the 2020-21 season includes plenty of new-to-Seattle work, the beautiful story ballet Roméo et Juliette (just in time for Valentine’s Day), and a world premiere by newly appointed Resident Choreographer Aljeandro Cerrudo, who has become quite a favorite of PNB audiences.

The season will also include performances of Snow White as part of PNB’s Family Matinees series. Snow White will be performed by students of the Pacific Northwest Ballet School.

Subscriptions for the 2020-21 season are now available for purchase online. Single tickets for the full season will be available on July 20.

Opening the season with sparkling élan, George Balanchine’s Jewels is a perfect primer of the iconic choreographer’s style: Emeralds whispers of grace, courtesy and French perfume; Rubies sizzles with American sass; and Diamonds conjures the magnificence of old St. Petersburg.

All Premiere celebrates a lineage of powerful female choreographers from Twyla Tharp, to Jessica Lang, to up-and-comer Penny Saunders, each with their own bright and arresting perspective.

“One of the most beautiful ballets adapted from Shakespeare’s masterpiece that can be seen today.” (Scènes Magazine) Jean-Christophe Maillot infuses Shakespeare’s tragic tale of star-crossed lovers with intoxicating emotion and heart-rending beauty.

Who’s the fairest of them all? Snow White, of course! Danced by the students of Pacific Northwest Ballet School, this hour-long narrated matinee version of the treasured classic was designed for younger audience members.

The return of the happiest ballet on earth! A hilarious and charming tale of mistaken identity, Coppélia promises bravura classical ballet, exquisite scenery and costumes, and pristine choreography for the PNB company plus 24 tiny dancers from the PNB School.

This collection of works pays homage to ballet’s past while ushering the art form into the future. The program spans nearly a century of modern American ballet, from the intensely theatrical Pictures at an Exhibition by Alexei Ratmansky, to the hypnotic flow of Alejandro Cerrudo’s Silent Ghost, to the fountainhead of contemporary classicism—George Balanchine’s Apollo.