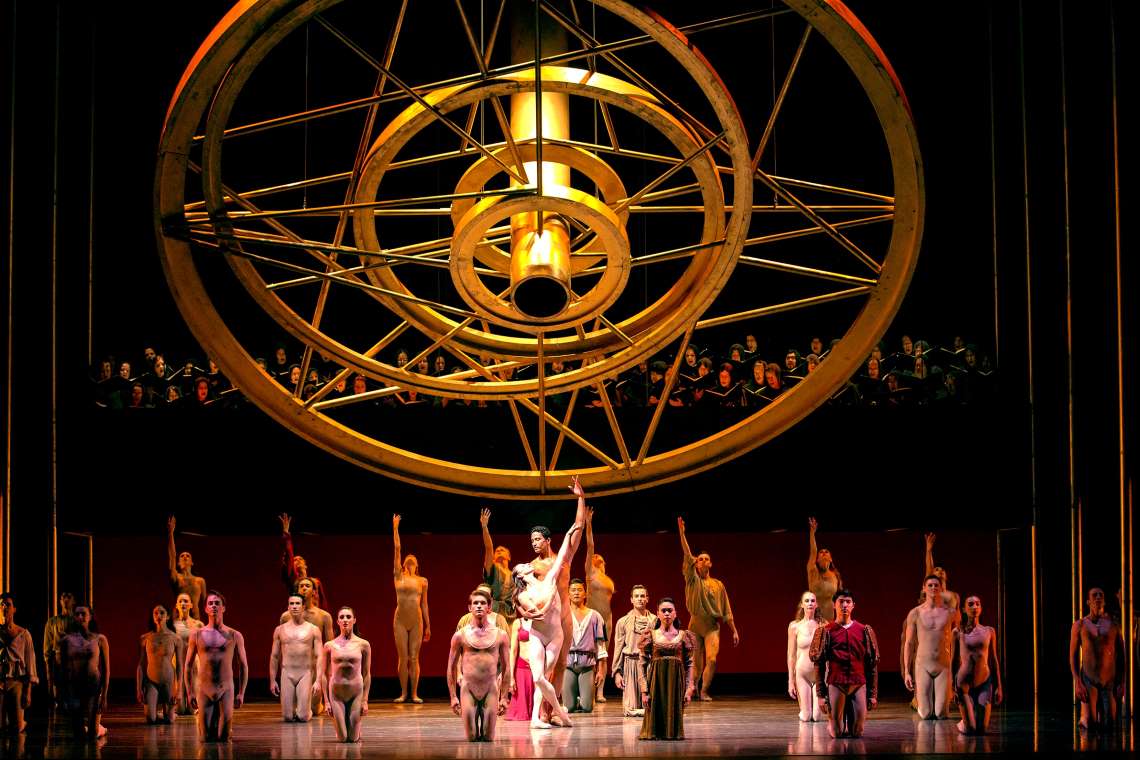 Carl Orff’s Carmina Burana choreographed by Kent Stowell is a visual extravaganza where a 2,500-pound golden wheel rotates above more than 100 dancers, musicians and singers. The second work, Agon, marks a high point in the partnership between choreographer George Balanchine and composer Igor Stravinsky. We talked to Music Director and Principal Conductor Emil de Cou about the musical challenges and payoffs of this evening at the ballet.

Rosemary Jones: This particular version of Orff’s Carmina Burana was choreographed by Kent Stowell for the opening season of Marion Oliver McCaw Hall. What do you think of it today?

Emil de Cou: People forget that that Carmina Burana was originally done as a piece of theatre. I’ve done it as a symphony concert many times, but when you add dance, lights, costumes and a set, then it is a rare opportunity to see it as Orff meant it to be seen. I love what Kent did. The piece is one of the trickiest and the best that we do at Pacific Northwest Ballet.

During rehearsals, what’s your most frequent reminder to the orchestra and the singers?

Use the language! I remind them that even if you don’t understand the words, the audience needs to understand the text as written; that the sound of the word adds excitement. There’s the very loud opening of “O Fortuna” and then it gets very hushed and quiet. The trill of the “r” and the hard “t”, that makes it sound that much more sinister and spooky. The orchestra plays this brilliantly. We have the Pacific Lutheran University Choral Union as the chorus again. We also had them last November for Jupiter Ascending. They are so beautiful to hear and a real joy to work with.

You have spoken about the responsibility of a ballet conductor to support the dancers, to the point of changing up your conducting in response to what’s happening in a live performance. In conducting the choir and the orchestra while musically supporting the dancers on stage, are there any particular moments in Carmina Burana that are especially tricky?

It’s not like we’re doing Swan Lake or Romeo where I can change on a dime. It’s very much in the Balanchine aesthetic where the music comes first. So, what we can do [as an orchestra] is more fine tuning. There’s “In Taberna” where  all the men are on stage, very rhythmic and bawdy. Rhythmically the composer has taken a lot of ideas of Stravinsky and The Rite of Spring, creating neo-primitive music. Orff goes back to this primitive prehistory music idea where everything is based on rhythm. Right after that is the “Cour d’amours,” which feels like very idealized Debussy harmonies. It’s very yin and yang, as we are going from bawdy, boisterous drunkenness to the female soloist on stage. It’s also very fun to perform.

Part of the excitement of Carmina is having the choir visible and suspended over the stage. What are some of the challenges of that staging and having them almost as far away from you as possible?

The chorus is located up against the back wall, about 20 feet above the stage, and wearing hoods. They can’t hear each other well. They do have their music, but it is lit very dimly. The staging is against all the things that choruses are used to doing. It’s really tricky.

When do you know for certain that it is going to work out and be a great night of music and dance?

I feel like that when the “O Fortuna” comes back. Up to that moment there’s umpteen things that could go wrong, and as a conductor, you can’t let your guard down. When the soprano sings this very high “D” that seems to come out of nowhere, you can tell that you’re there.

So how do you feel about the pairing of Carmina Burana and Balanchine’s Agon?

They are polar opposites. Carmina is like a Cecil B. DeMille epic on stage. Agon is very distilled. Agon is a masterpiece of Stravinsky’s but it doesn’t work as an abstract concert piece like Carmina. With Agon you need the dancers. The piece doesn’t come to life without that element. There’s this one moment where the audience always bursts into this huge cheering—and I think that’s the only time that a 12-tone composition gets huge ovation. Because it’s in the middle of Agon and because people listen with their eyes at the ballet.