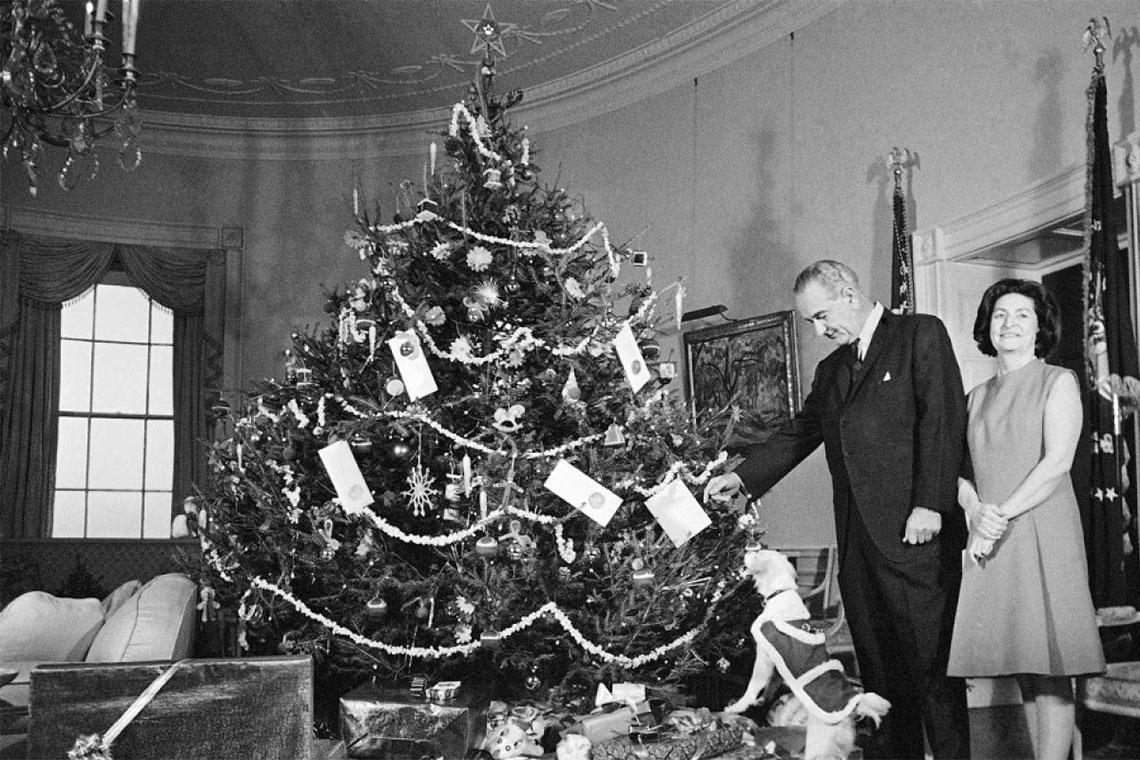 On Christmas Eve of 1967, the Accidental President was a victim of circumstance. Gone was the dominant political architect portrayed in All the Way. By the final act of The Great Society, the disastrous escalation in Vietnam has overtaken the Administration and threatens to consume LBJ’s ambitious legislative agenda, deftly indicated by Christopher Acebo’s steadily crumbling set.

By Christmas, LBJ had already made the painful decision not to run for reelection. He planned to announce his retirement in the upcoming State of the Union address, secretly assigning that portion of the speech to a former speechwriter but concealing it from the rest of his staff. He ultimately decided to leave the announcement out to keep the stench of lame duck off of pending legislation.

With that tragic backdrop, here’s the Johnson family Christmas card for 1967:

Heedless of the holidays and the futility of his prospects, LBJ still worked furiously to find a way to bring the war to a close, embarking on a globe-circling mission that started with a state visit to attend the funeral of Australian Prime Minister Harold Holt, who had disappeared while swimming off the coast of Victoria (and whose body was never found).

From there, LBJ secretly flew to the U.S. base in Korat, Thailand where he surprised airmen just returning from nighttime combat missions, then on to Cam Ranh Bay in South Vietnam where he handed out medals and visited with the wounded.

As more unannounced stops were added to the cryptic itinerary, an increasingly exhausted press corps began grumbling about the marathon holiday jaunt. Here’s an account from Sid Davis, one of 52 reporters on the press charter plane, revealing a cranky and driven LBJ who’d be right at home in a scene from the Schenkkan plays:

“Reporters’ complaints made their way to the president through notes assembled by White House press officer Tom Johnson. He quoted The Washington Post’s correspondent Carroll Kilpatrick as saying the president was being ‘too secretive, placing unmerciful pressure on the staff and the press.’

‘We’re sleeping on the deck,’ complained one reporter.

‘The president is fatigued,’ said another.

And this one: ‘LBJ is trying to kill us all.’

LBJ was not amused. He told the press pool aboard Air Force One that while he was desperately seeking peace, their buddies on the press plane ‘are bitching about their comfort.’ One sympathetic reporter assured the president the press was supportive. When the reporter left the compartment, LBJ whispered to ABC’s Frank Reynolds using an indelicate term to call the reporter a brown-noser.”

The contingent finally made it to Rome for a secretly-brokered meeting with Pope Paul VI, where the Air Force One helicopter became the first to land in the Vatican Gardens, bypassing rush hour trafffic with Presidential swagger. LBJ hoped the Pontiff could help broker a deal to end the war, if not at least advocate for better treatment of American POWs in North Vietnam. He was met with understandably benign skepticism and blessings but no breakthroughs.

What makes this trip a classic Midweek Moment of LBJ: Holiday Edition is the gift exchange that happened on December 23, 1967 between the two world leaders. Pope Paul VI gifted Johnson with a beautiful 15th century oil painting of the Nativity, and LBJ gave the Pope a bronze bust…of himself. That’s right: LBJ liked to gift heads of state with busts of himself. It’s such an illuminating Johnsonian nugget it’s hard to believe it didn’t make it into at least an early draft of the Schenkkan plays.

“You can’t fault a man for wanting to give mementos and gestures of his friendship. But what [LBJ] wanted to take with him was, I don’t remember the exact figure, something like two hundred busts of himself. Some of them were white marblish in appearance and others were bronze-looking. It is, I think, unusual for a man to give a bust of himself in his lifetime, although it’s difficult to give it any other time. But to make a mass-production gesture really boggles the mind…

Today, there are heads of state all over Asia who are trying to decide what to do with the President’s bust. But not just heads of state, because that would have been only a dozen or less [of the busts]. As I say, we had hundreds of them, so many, many people—cabinet ministers and all kinds of functionaries—received one. The President would say, ‘I want a white one.’ ‘I want a bronze one.’ And you never had the one he wanted and you had to go back to get it. [LBJ would exclaim] ‘Damn it! Can’t anyone do anything right?’”

And here’s a photo of the moment in the Vatican on Christmas Eve’s Eve (note Il Papa’s bemusement):

I think we can all relate. Merry Christmas, everyone!