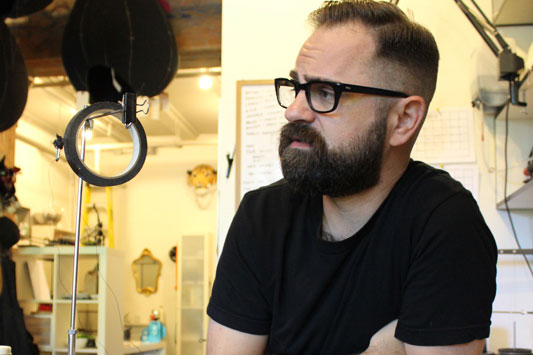 Next month the Pacific Northwest Ballet stages an entirely new production of Nutcracker after the triumphant 32-year run of its previous incarnation by Kent Stowell and Maurice Sendak. This new staging uses George Balanchine’s 1954 choreography and features costumes designed by Ian Falconer, the illustrator and children’s book author best known for the beloved piglet Olivia.

In anticipation of this epic transformation, I visited the Pioneer Square studio of Erik Andor, who’s been busy fabricating the mouse costumes for the new show. Andor is a costume design whiz in his own right—you might’ve seen his work most recently on the Rep’s celebrated Lizard Boy or for such high-profile clients as Cirque de Soleil and the Rockettes—and in this new undertaking he brings those skills to bear interpreting Falconer’s designs from the ground up. He walked me through his process.

“They sent me the artwork, I had a look at it, assessed it, and then we had ongoing conversations as I started to make a prototype. Costume director Larae [Hascall] is really involved, too, because the dancers have to wear these. The criterion is to meet the designer’s vision but also there are safety considerations because they’re dancing in them.”

“I started with the head. He was really attached to having kind of a bump in the nose, so we worked on that. They’re simple shapes but they’re really specific. They have a square forehead, these ears that are pointy and big thick whiskers.”

“The first one we did looked too much like a chipmunk; it had really fat cheeks. We talked about the mouth a lot. [Ian] has a particular way of doing mouths and ears on his animals. These mice are meant to be a little ‘nervous nelly.’ They’re high-anxiety mice, they have this nervous feel to them. You can see it in the posture of his sketches.”

“I figure out how to make it, what are the best materials, and move forward with that. Then we look at the body. Obviously these things have to last and be built really well, so that’s different than doing something for a commercial or a movie. These things have to have a lot of longevity; everything has to be laundered and maintained and replaced. Like, if the noses break they have to be able to be swapped out over the years. That’s a really big consideration.”

“We’ve been trying a bunch of different materials. For this one I explored a couple new things. This is a kind of high-density foam that is pretty rigid but super lightweight.”

“This is what’s called reticulated foam, which has a lot of different applications—you’ll see it in speakers or cushions on boats. It’s really breathable and you can wash it; because it’s a dance show and they’re gonna be sweating in these things, on occasion they’re gonna have to wash the costumes. So these can drip dry.”

“A lot of times when I’m making these big pods or body shapes, there are reinforcing hoops in them. These don’t have anything like that, so the shape is really just made from the pattern—they don’t have a structure inside. It’s a safety thing; if someone falls, you don’t wanna fall on a big hoop or anything. They’re pretty soft.”

“There are 16 mice: eight adults and eight children. Then there’s the mouse king: he has seven heads. This is the mockup, just to approve the size and shape and proportion and also use it as a technical model to look at balance and see if somebody could wear it. It’s so big, and this dancer dies onstage—he fights and dies, falls on the stage and some other mice pick him up and carry him out. Because the head is so big and awkward we have to develop a secret way of keeping it strapped to his body and keeping him safe.”

“The tails are really cool! My favorite part of the whole thing. They’re super lightweight, hand-carved three-dimensionally out of that same kind of foam. They’re really light and rigid so they can actually stand away from the body. They have this fabric core in the middle and then we take little slices out of ‘em.”

“When the dancer twitches their hips the tail has a really cool movement. Ian has this way of doing these tails where they’re sort of thick—the costumes are bulbous and thick.”

“They have human hands and human feet, so the only challenge is the visibility. The heads are actually worn on top of the head, and you see thru the throat; you’re not looking through the head.”

“I’ve done a lot of different kinds of stuff, and everything’s fun in its own way. The Nutcracker is such a Seattle institution, it’s gonna be around for a long time and a lot of people are gonna see it. So that’s cool.”