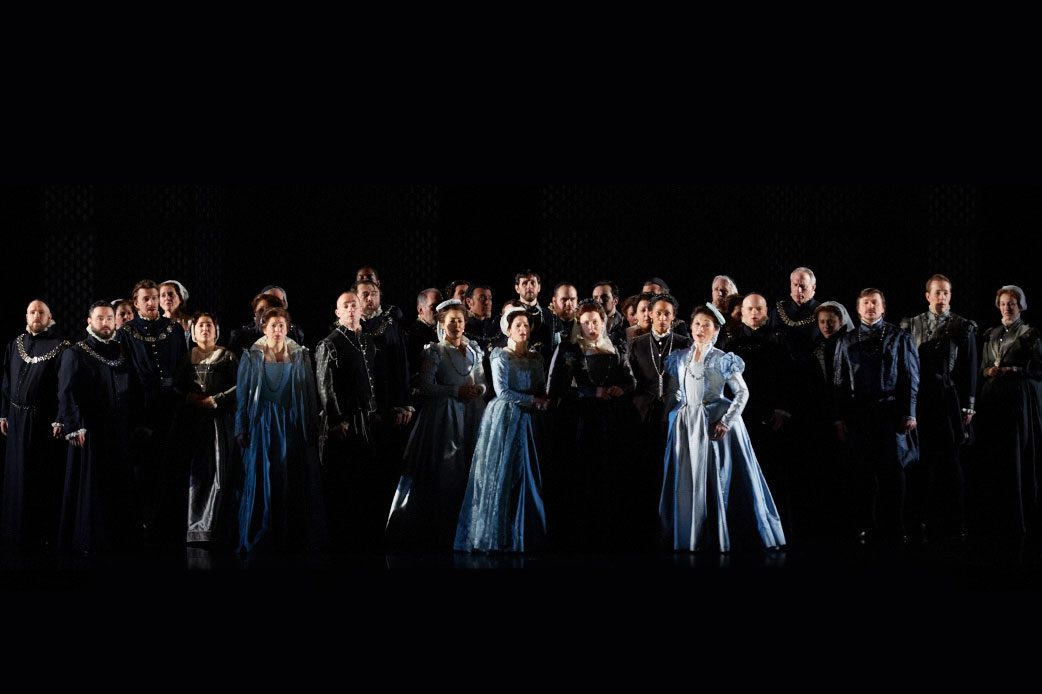 You really need to get in on some of this opera action. I know it can seem imposing or stuffy to the “untrained” ear (and eye), but it opens up to you really quickly. I watched Seattle Opera’s Mary Stuart this weekend—my eighth opera since I started writing this column, ninth in my entire life—and was completely transfixed for the entire two and a half hours. And I’m among the least sophisticated people I know.

I hesitate to use the term “acquired taste” to describe opera. That’s what we say about something that’s kind of bad the first time you try it. “Acquired taste” applies to sea urchin, Laphroig scotch and the movie Showgirls, but not opera. I saw my first opera (Carmen) when I was a teenager and I thought it was pretty cool. Didn’t really get it, but enjoyed the music and the sets. Same thing when I saw my second opera (Don Giovanni) last year. “Wow,” I thought, “that was pretty cool.”

This Saturday night, however, I was wiping tears away for pretty much the entire second act, which was not exactly short. More often than not, opera is a profound experience for me these days. Granted, it’s always going to depend on the specific show, and luckily Mary Stuart is a doozy. The overview on the Seattle Opera website nails it with one all caps quasi-sentence: “HISTORIC CONFRONTATION WITH SEARING EMOTIONS.”

The first act is a political history melodrama, detailing the behind-the-scenes machinations as Queen Elizabeth confronts her imprisoned cousin Mary Stuart (“Queen of Scots” Mary, not “Bloody” Mary, FYI) and decides her fate. It’s complex, tense and often quite funny. The second half, however, is pure tragedy. It’s a doomed woman grappling with her impending death, absolutely bracing in its sadness. Throughout the show, Gaetano Donizetti’s gorgeous, accessible music keeps the viewer emotionally involved, to an almost unbearable degree. Seriously, during the final half hour I was completely surrounded by snifflers.

But enough of my asinine, “I’ve only seen nine operas” blathering. You didn’t come here to get my fool take on the matter. Fortunately, I attended the show with Seattle’s own Opera Superfan, the one whom the prophets called “Evelyn Troughton,” who has seen just over six million operas AND just so happens to be my very grandmother. I caught up with her between acts and after the show to get the real scoop on Mary Stuart.

GRANDMA: What did you think?

I think this is great.

Really? I don’t have a lot of experience with this opera. I’d seen it one time before, four years ago, and it was the same opera, same production, same sets and all and I didn’t remember one thing. But that’s not unusual because it takes me more than one viewing to remember a lot of things, sets and the like. The costumes are new. They were done for this opera special. Did you get something to eat?

Yeah, definitely. There’s a lot of shadows. Lots of people in front of blackness.

Lot of color and a lot of starkenss.

Oh, bel canto. That’s not the name of the composer!

[Laughs] No, the composer is Donizetti. And he wrote bel canto music.

So just so we’re clear, it’s Donizetti, not “Bill Canto.”

Bel canto. This is one of the more emotional operas that I’ve seen so far. This is way different from any opera that you’ve seen, isn’t it?

You can’t close your eyes because people are saying a lot of things and you really do need to know all of it.

Talk, talk, talk. Because there’s so many emotions.

And that moment when Mary and Queen Elizabeth first meet up is really intense, when everyone shifts around on stage. They built it up for an hour, and then it happens and it totally lives up to expectations.

The director did a wonderful thing there, didn’t he? So this is totally different than anything else you’ve seen.

This one is really in my wheelhouse, because I love stuff about history and politics—those are the the kind of movies I really enjoy. It reminds me of House of Cards.

Which is a TV show about politics.

I’ll tell you a little thing that’s fantastic. The woman who’s singing in the role of Mary tonight is from the second cast. The other [performer] is sick, so she’s singing them both! She’s gonna sing both nights in a row!

The conclusion to the first half was really raw and intense, with Mary and Elizabeth calling each other horrible names.

Yes! When this opera was first done, when Mary called Elizabeth a “bastard,” that was considered reeeeeally bad.

Well, she said “bastard,” but “whore,” also. She’s just letting Elizabeth have it!

Yes! Do you think she knew she was doomed anyway, so she was just trying to get it over with?

“She’s never going to let me go anyways, so I’m just going to say what I think.” And Mary was not the kind of person to play on someone’s sympathy.

So, I see you have a Kleenex there.

[Laughs] Yeah! Now, in the beginning it feels minimalistic, but in the end, I think it’s not.

All of the components of the set come down from the ceiling, which I think is important.

Why do you think that?

I could be wrong, but personally I think it’s to emphasize the idea of this giant unstoppable thing bearing down on a person. It’s clearly a deliberate choice.

That’s an interesting thought. I hadn’t thought about it that way. Everything coming down from up above, it was really meaningful.

I was surprised—and you already knew this—I thought from the first act that this was like a back-stabbing, palace intrigue sort of thing, but then the second act is just pure tragedy. Mary coping with her impending death.

But of course we know the history of the thing, we know it couldn’t have been any other sort of thing. They didn’t give a great deal of the history, though. They talk about Mary’s husband and Babington, the two big sins she wanted to atone for, but all these things really happened a long time ago. It wasn’t just yesterday, it was in the past. She had a son who ruled in Scotland for a few years after she died, and then he died. People weren’t healthy in those times.

No, you could just die any second. Especially if you were royalty.

[Laughs] That’s true! If you get on somebody’s bad side…

The part where she was on her knees wearing the red robe and the cross was behind them and the whole chorus was singing, that might have been my favorite thing that I’ve seen at the opera so far. Hard to imagine anything being better than that. It was nuts.

I had no idea how you were going to take this one! After the last one with all of the moving sets, I was wondering “how is this going to work out for Travis?” I’m glad it worked out! [Laughs]

It was a powerful, moving experience. And that might have been the most excited I’ve seen an audience here before.

Well, there were definitely plenty of those people who stand up too soon at the end because they’re excited and then I have to stand up just to see the rest of the performers take their bows.