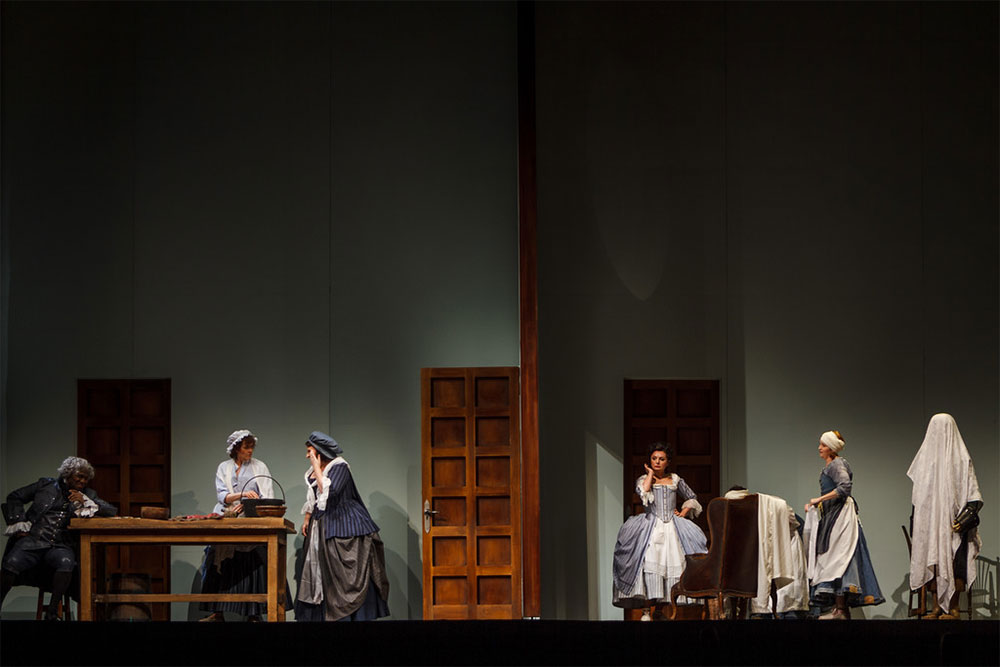 Full disclosure: I didn’t go into Seattle Opera’s production of Marriage of Figaro completely ignorant. I know, I know—that goes against the entire principle of this column, and my entire persona as a writer (such as it is). Fact is, I had been hired to write an article for the program discussing the cinematic aspects of director Aidan Lang’s ambitious interpretation of the Mozart classic. And I couldn’t very well write about it without seeing it first. My hands were tied!

Yes, I went into this show cursed with the taint of familiarity. Then again, that’s why I was so excited to finally see it live. I’d watched some stodgy old, poorly lit DVDs of other productions. Better than that, I got to watch a video of the New Zealand production from 2010 in which Lang first employed his elaborate moving set. The video wasn’t of the highest quality, but it made it pretty apparent that this was going to be an opera unlike any I’ve seen before. The set is like a giant automated puzzle box, shifting around, creating a hypnotic, malleable tableau.

For reasons that are both complicated and boring, I wasn’t able to attend this opera as I usually do, sitting next to one Evelyn Troughton—Seattle’s most beloved opera fanatic and grandmother of me (and several others). But I assure you that we were both in that auditorium that night, separated by a mass of cultured humanity though we were. We got together the next day over burgers at Ballard Brothers, while the Seahawks/Panthers playoff game played on a flatscreen overhead. I tried my best to ignore the televised debacle, but it wasn’t easy.

GRANDMA: Now then, you told me—“Ha ha ha” you texted me, “I know more about this opera than you do!”

Yeah. That might be an exaggeration, but I got to go into this opera actually knowing things about it for a change.

So why don’t YOU tell me about it and I’ll interview you!

And Aidan did all kinds of cool set stuff that he brought over from New Zealand to help focus the viewer’s attention, because the plot’s really confusing and I think it helps a lot.

I think it’s true. And I will confess that before this performance I had seen a dress rehearsal. So it was not new to me but it was good to see it a second time and even a third time to get it to stick. It’s great! It’s colorful…to a degree. It’s not elaborately colorful or elaborate sets.

The set design is elaborate, but the sets that you actually see are just one color with a piece of furniture or two. It was minimalist at rest, but then the set would shift before your very eyes.

Right! So it wasn’t that minimalist in the end.

This might have been the most I’ve heard an audience laugh at the opera before.

Well, has there ever been one so funny?

Well, Ariadne auf Naxos was pretty funny, but it wasn’t a straight comedy all the way through.

Oftentimes in operas the audience looks at the supertitles and laughs because there’s a joke, but in this one they’d laugh sometimes not at what was said but what they did, don’t you think?

Yeah, lots of great physical comedy. The scene, the classic comedy set piece from the third act where everyone’s related—

People behind me were going “WHAT” and busting up, like it was a regular TV comedy or something. Really engaged, it was pretty amazing.

They were paying attention it would seem. I’d forgotten about all that, where it turns out they’re his parents. It’s hysterical!

My friend pointed out how amazing it is that we often find the same things funny now that we did three hundred years ago.

That was a good point to make. That’s one of the points that Jonathan made in his article in the program about why comedy taught him everything he knows. That’s not the case in some operas, when the humor is about some event that’s happening in a specific time.

Yeah, you have to know the specific political and historical stuff to get it. But I think that this one is in some ways a satire of things that were happening at that place and time, but it’s mostly just a sex comedy, which works any time.

Uh huh. Exactly. That never goes out of style! [Laughs] Now here’s the question. When we first started doing this, you said you didn’t want to know anything about the operas beforehand. You didn’t want me to tell you anything. You wanted it all to unfold before your eyes. How do you feel about that now? Does it work better for you to know about it?

Umm…yeah. I still like the idea of going to the opera without knowing anything about it, but in this case I knew the story backwards and forwards. I knew who the characters were and what they were all about, so I could just focus on the actors’ interpretations of the characters.

And really listen to the music.

Yeah. I’d seen three different versions of this. Three different Cherubinos. So when he showed up I was like “Ooh, it’s Cherubino! Let’s see what this lady does with it!” [Note: Cherubino is a “trouser role,” a generally youthful male character portrayed by a woman]. And I really liked her in this show.

The audience did too.

She was hilarious, clearly having a great time. So I’m not saying that’s how I’ll do it in the future, but it absolutely helps to know about the opera beforehand.

It does! [Laughs] I got a lot of phone calls working down there in the office. People asked me, “Is this going to be a traditional performance?” And when people say “traditional,” what they usually mean is historical costumes as opposed to contemporary fashion. And I said “I’ll find out for you,” so I walked back to ask Mary—who is Aidan’s, what do they call them now, they used to call them secretaries but now it’s “executive assistant” or something. And [Aidan] happened to be coming out and he said, “It’s traditional.” However, another phone call I got said, “But why are they advertising on the web and everywhere else…” So I looked at the ads and everything, and if you look closely you can see that some of the costumes are contemporary!

Yes, I noticed that!

[At this moment, the crowd in the restaurant goes crazy, whooping and cheering.]

Yeah, they scored a touchdown.

Oh. Well, they just did what they’re supposed to do, so why does everyone get so excited about it?