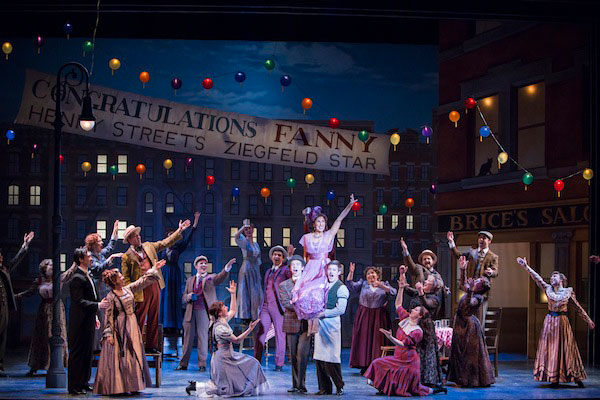 It was no laughing matter getting Funny Girl onto a Broadway stage. The 1964 musical about the life and times of vaudeville legend Fanny Brice (currently on stage at Village Theatre starring Sarah Rose Davis) is now a classic, and rightfully so, but it had plenty of swings and misses along the way.

The show’s early days were filled with personnel changes and scripts written, rewritten and scrapped, and rewritten again. People were hired and let go, and hired again only to quit. Choreography was changed almost as often as choreographers; stars were considered and rejected. With all that tumult, it’s a wonder that Funny Girl ever got on stage at all.

The musical is set in New York City circa World War I; the story is about the Ziegfeld Follies star Fanny Brice (a real star of stage and screen at the time) and her relationship with husband Nick Arnstein (a gambler who saw the jail cells of both Sing Sing and Leavenworth in his lifetime).

The idea to dramatize their story started with Ray Stark, husband to Brice’s daughter Frances, who commissioned an authorized biography of his famous mother-in-law. He didn’t like the finished result and paid $50,000 to stop publication of The Fabulous Fanny entirely. Strike one.

Stark then turned to Ben Hecht (famed screenwriter of Scarface, His Girl Friday, and Notorious, among many others) to write a Fanny Brice biopic instead. Stark didn’t like Hecht’s finished result. Strike two. Nor did he like the efforts of the ten writers who tried to write the biopic after Hecht.

Finally, Isobel Lennart produced a script that Stark was pleased with, My Man, which he promptly sold to Columbia Pictures for a tidy sum. Brice’s life would hit the silver screen. But wait! Wouldn’t it be better as a stage musical?

After reading the screenplay, Broadway star (and Rodgers and Hammerstein favorite) Mary Martin contacted Stark with just such a proposal. Stark contacted infamous Broadway producer/impresario David Merrick, who suggested that Jule Styne and Stephen Sondheim (creators of the 1959 musical Gypsy) tackle the adaptation. Sondheim, as legend has it, told Styne that he wouldn’t do a Fanny Brice story starring Mary Martin, because she wasn’t Jewish. Soon after, Martin backed out.

The long list of strike-outs continued, as name after famous name considered the project and then dropped it. Broadway director/choreographer Jerome Robbins and actress Anne Bancroft. Actress Eydie Gormé was in contention for the part of Fanny, but would only play it if her husband was cast as Nick. Carol Burnett turned the role down because she insisted it should be played by a Jewish actress. Then there was Barbra Streisand, who Styne remember from her earlier Broadway debut. Intriguing!

They’d found their Fanny, but the whole project was shelved as Styne worked on other material, and dusted off when the legendary Bob Fosse signed on to direct. He quit, and the project was put back on the shelf. Streisand didn’t want the new director, Garson Kanin, and wanted Jerome Robbins back! And, what? Kanin wanted to cut the song “People” from the show, even though Streisand has already released it as a popular single? Okay, the song stayed in.

The show hits out-of-town tryouts in Boston, where critics like Streisand but not the show. It’s too long. The libretto stinks. The New York opening was delayed four times as they worked out the script. It finally bowed on March 26, 1964 at the Winter Garden Theatre on Broadway, directed by Kanin and choreographed by Carol Haney, with music by Jule Styne, lyrics by Bob Merrill and a book by Isobel Lennart. And just like that, it became a smash.

“In a black sequined dress that clung to her thighs like a patch of lichen, she threw her head back, sang her heart out, and knocked New York on its ear,” Joanne Stang wrote of Streisand in the New York Times, following the debut.

Funny Girl was nominated for eight Tony Awards including Best Musical. (In one final strike, Funny Girl faced off against Hello, Dolly! and didn’t win one Tony Award because of it.) The cast album went gold. There was a successful run in the West End of London. A subsequent movie adaptation was the highest grossing film of 1968; Streisand won the 1969 Academy Award for Best Actress.

Forty-plus years later, Funny Girl is still a smash. With classic songs like “People,” “You Are Woman,” and “Don’t Rain on My Parade,” Village Theatre will undoubtedly not strike out at all.