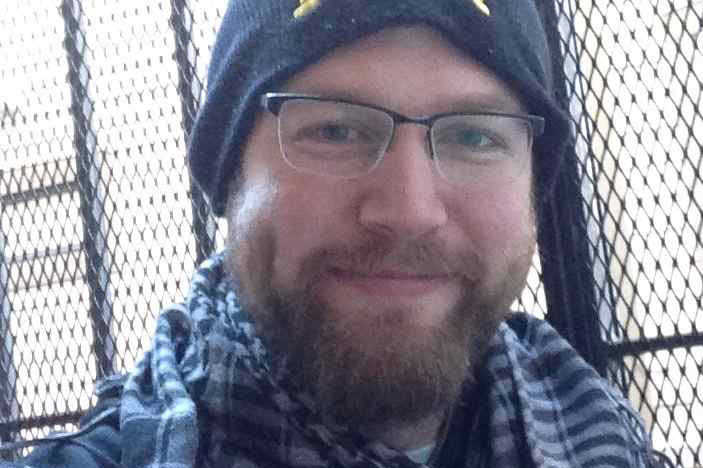 Richard Bresnahan has been technical director of On the Boards for the past five years, shepherding countless productions to fruition. An average day might consist of drafting scenery or standing by to assist an artist in any problems they might encounter in the act of creation. It might also include, as he says, “cleaning up glitter and red Jell-O.”

Having closed our 5 Fri Q run of notable local playwrights, we begin a new series today focusing on the technical artists and backstage heroes of Seattle theatre. Bresnahan joined me for the first installment. Intriguingly, when he returned the answers to my five questions he also sent along a questionnaire of his own, which he has all his friends fill out. The interviewer becomes the interviewee! (I fully intend to participate right after I post this interview, and I’d love to see some of the others in his friend archive).

Currently holding the number one spot: Thunderpussy at the Tractor. It was Whitney’s birthday, and it was a blast. They killed that show. I saw them perform at the Sunset, and their cover of It’s a Man’s World was simply divine. Second on the list is Kid Koala. He has been through town a few times, and it’s always a great show.

I have had some of the greatest food of my life in Seattle, and the current reigning champ is the bacon cheese burger at Jules Maes in Georgetown. Have a porter before and a red after and you’ll be a happy camper.

Whenever I’m sad, Al Green and Joss Stone keep me company. If I really need to get out of a funk I find “I’m Elmo and I Know It” will always cheer me up. With that on, you can’t be sad for long.

What’s the most crucial element of a production and why?

For me it’s editing. “Brevity is the soul of wit,” as they say. Being able to cut anything within a production—be it dance, theater, or music—seems to be a huge challenge. Not everything makes it to stage, and that’s really okay.

The most useful things I’ve learned are to have a positive attitude and work harder. The hours are long and not many people are in theater for the fame and fortune. So working with people who suck just makes everything exponentially harder. Hard work rarely goes unnoticed or unrecognized, so just keep at it ’til you’re happy with the product.