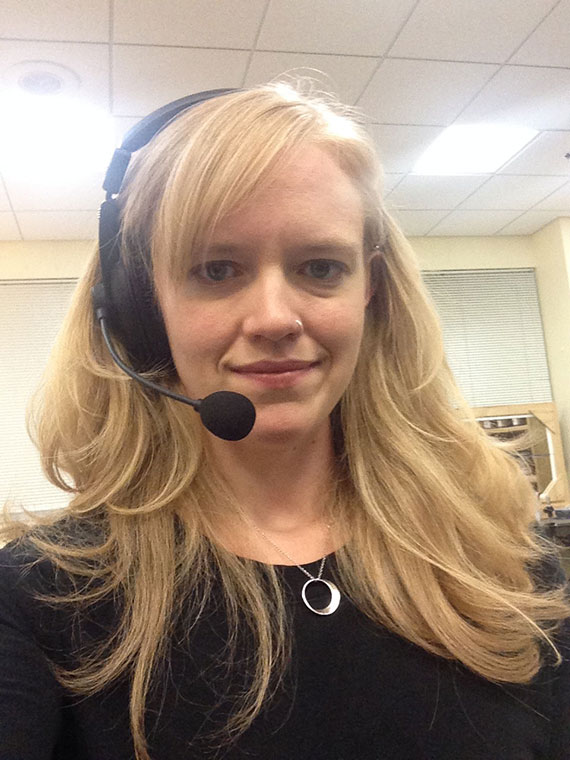 Miranda Pratt is an Equity stage manager who moved to Seattle in 2008. Since then she’s stage managed for Village Theatre, Book-It, Seattle Rep, and 14/48 among others, and served as production manager for Seattle Shakes and Theatre Schmeater.

Currently Pratt is stage managing and running the sound board for Wooden O’s outdoor production of Hamlet, which closes August 7. (Check out our 5 Friday Questions with the show’s Hamlet, Conner Neddersen.) Next up, she’ll be stage managing The Winter’s Tale for Seattle Shakes, opening September 9, and then she’ll be work as assistant stage manager at the Village Theatre for Singin’ In The Rain.
Pratt joined me for this week’s installment of Five Friday Questions.

I went to New York in May and got to see Tony Award winner Cynthia Erivo play Celie in The Color Purple on Broadway and she was absolutely, breathtakingly astonishing. I actually only saw her in Act One—she got ill and her understudy went on for act two (her understudy was also great)—but one act was enough to see how talented she is!

I will eat anything Kelli Waugh cooks up at Solo Bar. Her food is really creative and always amazing.

I listen primarily to musical soundtrack and pop music. Right now, if I’m trying to get pumped for something I listen to the Hamilton soundtrack or any random pop station on Pandora.

When I’m sad I like to listen to music I can sing along with, which probably means listening to all of my musicals on random and skipping the songs that are out of my range.

The people in the room are always the most important, from the director and designers to the cast to the backstage crew; the people who put the show together are so critical. When you get a group of people who can collaborate and build off one another it is a truly magical experience.

Go with the flow and be flexible. We do live theatre and anything can happen. Especially as a stage manager, you need to be able to adapt to any situation and roll with it, whether it’s a crazy audience or an unexpected understudy. I learned this lesson stage managing for 14/48; everything happens so fast, you don’t have time to think about what’s coming next, you just have to do what’s in front of you!