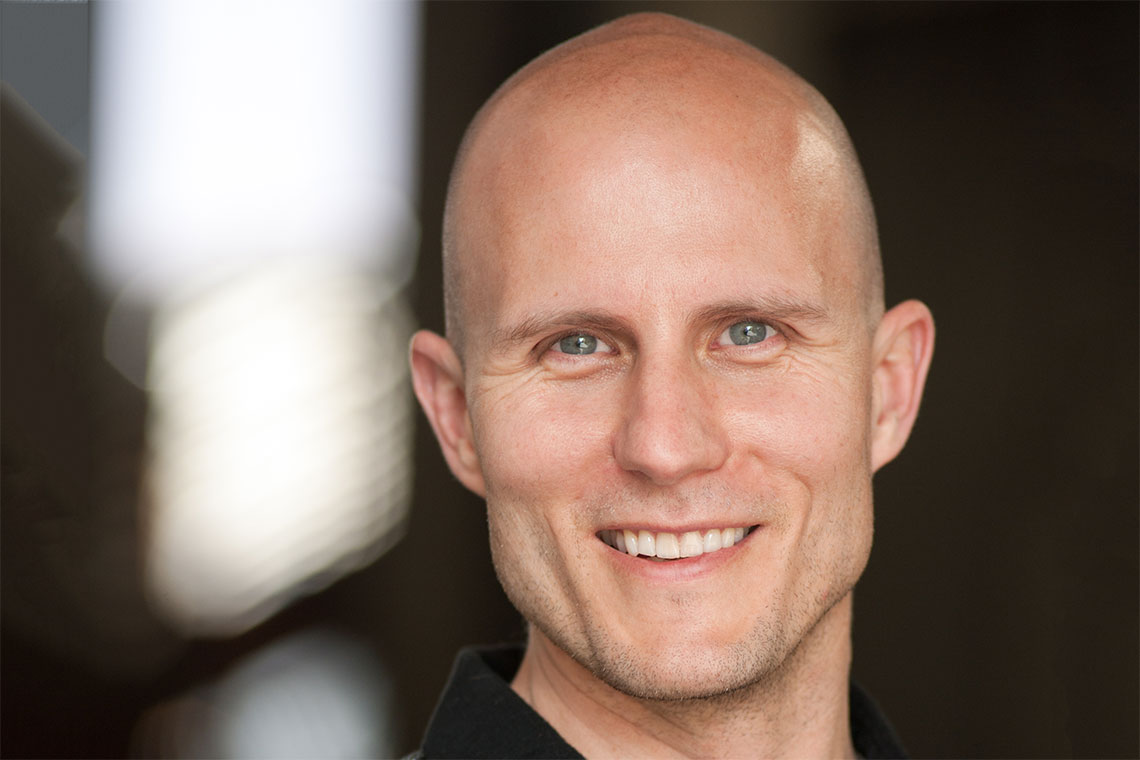 Martyn G. Krouse is a Seattle actor and voiceover artist. You might’ve seen his great performance in the ensemble of Book-It’s amazing Slaughterhouse-Five. He’s performed with Seattle Shakespeare Company, Washington Ensemble Theatre, Annex Theatre, Sound Theater Company and Greenstage, among others. He’s also appeared in a number of television commercials, radio spots, and feature films and co-starred on NBC’s Grimm. He lives in South Seattle with his partner Amy-Ellen, his daughters Mary Rose and Amelia, and their leopard gecko, Sam.

Krouse can be seen next this fall’s Washington Ensemble Theatre season 12 opener, the Seattle premier of 99 Ways to Fuck a Swan, which runs September 25 through October 17 at 12th Avenue Arts. He joined me for this week’s installment of Five Friday Questions.

I was lucky enough to be vacationing near New York City last week, so I took my family to see The Curious Incident of the Dog in the Nighttime on Broadway. I had been hearing people talk about it backstage during Slaughterhouse-Five. One person had seen it live in London, someone else had seen the National Theatre Live broadcast at SIFF and another person had seen it in New York. Everyone loved it. So I bought tickets, and the next day it won five Tony awards including best play and best lead performance. I loved it. It was more of a spectacle than I expected, which was great, but it was still centered on the actors’ performances.

I love theater that successfully incorporates music, sound, set, lighting and other effects in a way that seems almost cinematic, while still putting the focus on the live aspect of the actors’ performances. I think the big London theaters do it really well, from the little I’ve seen watching the live broadcasts at SIFF (I love those by the way), but that’s probably because they can afford to. It’s not a cheap way to do theater, but man is it fun to watch.

My favorite meal is probably the next one I’ll have at Tamarind Tree up on 12thh and Jackson in Little Saigon. I’ve been making my way through their menu for a few years now. I have a hard time sticking to one thing. Next time, I’ll probably get the bun, which is a bowl of grilled meat over chilled rice noodles and sprouts and stuff. Or the short ribs. Or the imperial crispy rice. Or all of those things.

The Pandora station I listen to at the gym (where I do mostly physical therapy exercises with the little rubber bandy things and 5-pound weights—so not “pumped” exactly) is Daft Punk with an infusion of Macklemore & Ryan Lewis. I don’t necessarily like to listen to music when I’m sad, but I might put on something like Elliott Smith or Bon Iver, or maybe even the Cocteau Twins if I want to indulge in some angst-ridden teenage nostalgia.

I think it’s the writing. A production with bad writing is never going to be great, no matter how good the directing, acting, or design. Good writing for theater or film has to not only tell a compelling story but also to deliver it by means of the director and actors and designers to the audience. That’s different from say, a novelist, who has a direct connection with the reader. I think that’s an interesting proposition and a challenge, because it forces scriptwriters to convey a clear vision while also giving up control of the final outcome.

As an actor, I’m amazed at how much work goes into understanding a script; there are no footnotes or explanations, and the writer usually isn’t around to explain things. That might sound like a bad thing, but I think the challenge becomes an invitation to engage and an acknowledgment by the writer that he or she honors the collaborative aspect of performance.

The experience was a little different with Slaughterhouse-Five, but the writing was just as important. Obviously there you had an original work of art, which was not written for the stage—the novel by Kurt Vonnegut. Our play was based on an adaptation written by the director, Josh Aaseng. Like many Book-It adaptors before him, Josh understood how important a good script was for the success of the story on stage, so he brought in the actors months ahead of time for a week-long workshop to try out different scenes and versions of the script. And even though he was both writer and director, and came in with a strong vision, he allowed the play to become the work of the entire cast and design team, adjusting and editing as we made new discoveries along the way. That’s not a typical experience, but it was terrific to be a part of.

I was backstage before opening night on a recent production, all of us actors were kind of milling around in anticipation, hugging and fist-bumping. We had worked 10-hour days with technical rehearsals and previews leading up to opening after four weeks of long rehearsals on top of our other jobs. We were exhausted, but there was electricity in the air. A cast-mate came over to shake my hand, and he said, with a big smile on his face: “This is what we do.” What a privilege, to be able to act in front of an audience! But it’s easy to forget when it becomes work. As a local director I’ve worked with several times, Teresa Thuman, always says to a cast before opening, “Remember how much you love this, and have fun.”