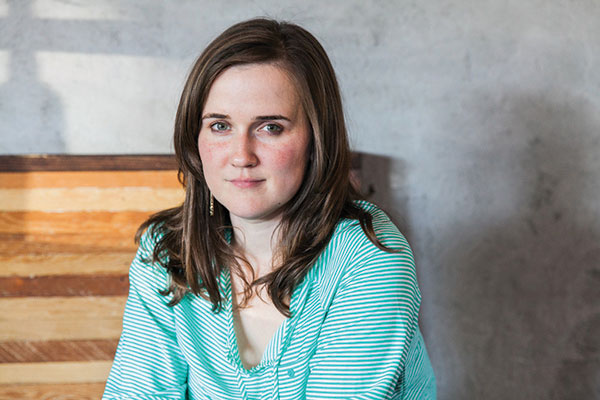 Erin Murray is a “femme forward” theatre maker and educator. A native of Washington, Erin grew up in University Place, just outside of Tacoma and describes herself as a PNW woman through and through. She’s a director with affiliations with seemingly every theatre in the area and recently added podcast host to her resume with her show That’s WOW: That’s Womxn of Washington, where she talks to femme culture makers and leaders in the area about their work. We had a chance to talk to her about her passion for plays from the female perspective, her love for the Pacific Northwest, and her dream project.

You went to Northwestern in Chicago to get your MFA in directing, but decided to move back to Seattle and grow your career here. What excites you about directing in Seattle and the Pacific Northwest? What about the region inspires you?

We are a region of pioneers in a great time of change, so I knew this would be the best place for me to continue to grow. The major theatre houses have had changes in artistic leadership in the past three years: John Langs at ACT Theatre, Braden Abraham at The Rep, even Aidan Lang at Seattle Opera, and with Andrew Russell moving on, there will be more. Mat Wright has brought new folks to ArtsWest, Kelly Kitchens and Annie Lareau are shaking up programming as the new heads of Seattle Public Theatre, and newer companies like Forward Flux are finding strong root systems.

After broadening my skill set at Northwestern, I wanted a city where I could continue to direct a broad range of projects and not be confined to one style—and I’m finding that. I’ve worked and studied all over the northern hemisphere and I can tell you that American theatre is lacking a PNW voice. I would like to see that change, and I want to be that change. We are a weird region surrounded by terrifying beauty. David Lynch understood that when he placed Twin Peaks here. I want to explore our voice in American theatre.

I know work by female and non-binary playwrights is very important to you. How do you hope to bring more female playwrights to Seattle stages?

I was awarded a Spark Grant by the Greater Tacoma Foundation this summer, so myself and Ana Maria Campoy will be bringing a semi-staged reading of Tanya Saracho’s bilingual play Fade on a three-venue tour of Tacoma this fall.

I have also been developing a theatre company dedicated to the work of The Kilroys [an organization that publishes an annual industry-wide list of plays by women and non-binary playwrights] and we hope to have a production in Seattle for summer 2018.

Besides pitching and producing Kilroys’ works on my own, I have also developed curriculum for a Kilroys analysis and scene study class that I piloted this summer at Youth Theatre Northwest. The Kilroys work catalogs the most current voices of American theatre. I would love to educate more students, actors, and theatre goers to maximize their appreciation for this new class of daring playwrights. I’m also being more upfront about calling out material I am offered that does not contain complex roles for womxn.

Who’s your favorite playwright working today? Where can we see their work?

Benjamin Benne writes thrillingly theatrical plays with strong female characters and I’m so proud that he is a Seattle playwright. His newest work, Las Mariposas, was produced by Forward Flux in September. Chicago playwright Philip Dawkins writes crackling, smart dialogue and bold femme characters, so I’m pleased he just opened Charm in New York. Arlitia Jones is an Alaskan playwright who was working with the Seattle Rep playwriting program and I want The Rep to fully produce one of her plays because they are fresh, dark, and ambitious while containing her fabulous sense of humor. Elizabeth Heffron is another Seattle playwright I am proud to know, and I wish the city would support her with more gusto. I’d love to see Mitzi’s Abortion play again in light of our current administration. Finally, Clare Barron is a Kilroy’s playwright from Wenatchee who just won the Susan Smith Blackburn prize for playwriting, so I’d love to see Dance Nation play in Seattle.

What are you most looking forward to seeing in Seattle this season?

Sheila Daniels is directing The Wolves at ACT in the new year and that is going to be fantastic. It’s a deftly written contemporary script with an outstanding director at the helm. I’m also looking forward to Sara Porkalob’s direction of the Kilroys List show Peerless by Jiehae Park in January at ArtsWest. And I’m keeping my ear to the ground for Carol Louise Thompson’s site specific work This Is a Show About Progress, which is expected to be rescheduled after it was thwarted by property developers this summer.

If you could direct any play in the world and stage it in Seattle, which play would you chose? What about the play makes it ripe for Seattle audiences?

If I were given the opportunity to direct any play with full financial support and the city of Seattle as my intended audience, I would find a play that would show off the fantastic range of artists—both emerging and mature—that we have in our city. I have had the privilege of working with many emerging artists since returning to Seattle and I’d love to see them working on the larger stages and becoming familiar faces: Rafael Molina, Jonelle Jordan, and Ayo Tushinde to name a few. Charles Leggett, Amy Thone, Ray Tagavilla, and Kathy Hsieh are just a few established actors I would love to direct.

Seattle is growing, so I would want to bring people both new and native together around our most exciting storytellers. Chicago is a city that warmly supports its playwrights and actors and I’d love for that zeal to flow to Seattle. With this in mind, I would direct Mary Zimmerman’s Arabian Nights. We could do it in big warehouse in Georgetown, and get Amazon to donate 500 pillows for audience members to sit on. And we’d sell Pagliacci by the slice because if you are new to Seattle you should know about Pagliacci and if you’re familiar with Seattle then you should know Pagliacci pizza is the best. However, considering our current political state, I might suggest David Hare’s Stuff Happens, a deftly written seventeen-person play that examines how we entered the Iraq war. We’d take over the Rainier Club. Don’t worry, there would still be Pagliacci. And $2 Rainier tall boys.

Do you have any plugs? How can folks find more about you and your work?

I fly to Chicago soon to direct the midwest premiere of a Kilroy’s-mentioned play, I Saw My Neighbor on the Train and I Didn’t Even Smile by Suzanne Heathcote at Redtwist Theatre which plays November 19–December 19. Then I come back and start working the professional premiere of Shakespeare’s Other Women at Island Shakespeare Festival. Everyone should come to Whidbey Island and to enjoy some fantastic female-driven Shakespeare fan fiction. Come grab a whiskey with me before the show! After that, I start working on Seattle Shakespeare Company’s statewide tour including a bilingual production of Twelfth Night that I’m creating with Ana Maria Campoy. And of course, this spring at Youth Theatre Northwest, I’m directing your play, Dust—it’s a movement-infused play boasting a cast of twenty-two that features a dark take on the Peter Pan myth for millennial consumption. There are a few other projects in the works and all information can be found on my website. My podcast That’s WOW is available on iTunes.