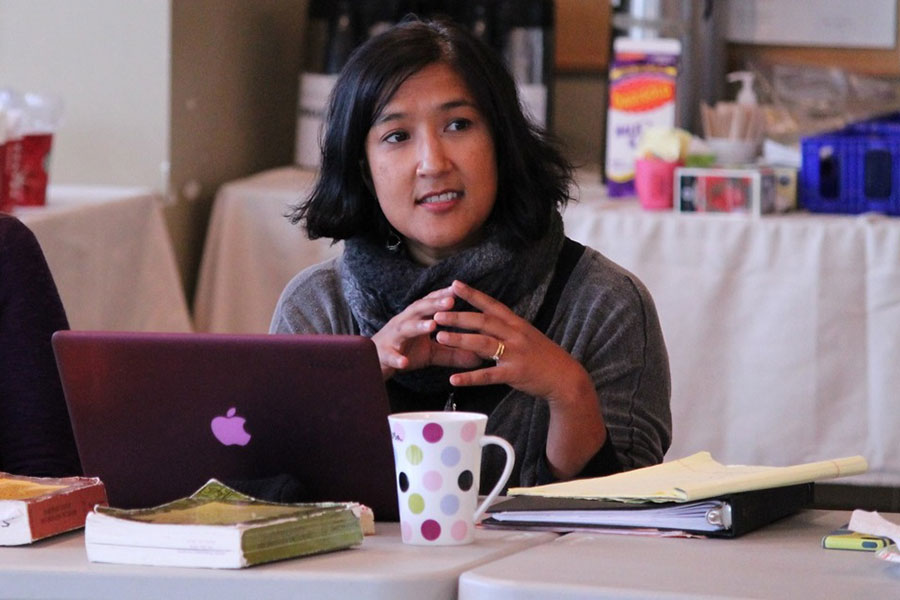 “I guess I don’t just like Shakespeare,” says Rosa Joshi, director of Seattle Shakespeare Company’s current production of Richard II. “I’m really rather passionate about it.”

Passionate is right. Joshi, who is on the faculty of Seattle University as an Associate Professor of Fine Art (Theatre), has directed 11 productions of 10 different Shakespeare plays.

“I love the expansiveness of Shakespeare’s world and how it encompasses the whole array of human emotions,” she says, her passion picking up steam. “I love that the world Shakespeare makes is created through language. I love how the richness of the language heightens and intensifies the characters’ emotions and relationships. I love how the plays can veer from the heights of poetic imagination and philosophical inquiry to the most naturalistic of everyday human encounters. And I love the ambition of vision that would let those things live side by side in a work of art.”

Joshi’s own vision turned to Richard II, after Seattle Shakespeare Company artistic director George Mount saw her upstart crow production of Titus Andronicus. They got to talking about how much Joshi loved Richard II, and Mount mentioned that he was already considering it for this year’s mainstage season. “I feel really fortunate to have the opportunity to work on a play I love with such a fantastic company,” she says.

The play is daunting and not often produced. The history play, written in 1595, is based on the life of King Richard II of England who ruled from 1377 to 1399. The play focuses on the last two years of Richard’s life. Language is more key in this play than in many other Shakespeare works because it is written entirely in verse. Only one other Shakespeare play, King John, is written in verse—a big reason that both plays are more obscure than some of Shakespeare’s beloved classics like Hamlet, Romeo and Juliet and All’s Well That Ends Well. But Joshi doesn’t see the form as an impediment.

“I’m not sure why it isn’t staged as frequently,” Roshi says. “It is a gorgeous play. It’s very moving and combines tragedy and history in a way that I think is really seamless. Richard II is one of the great male roles in the Shakespeare canon.”

For that, she looked to Mount, who is playing the deposed titular king. “He’s committed to the vision and the work,” she says, “so the collaborative process is rewarding.” The work was intense, she says. Hard. “Where you feel like you really accomplished something.”

In addition to the challenge of verse, Richard II also has no big battle scenes. Really, it has little physical action of any kind on stage—another daunting prospect for a director. But she welcomed the challenge, and finds working through it appealing. Through simple yet arresting set designs by Carol Clay and fine actors (Mike Dooly, David Foubert, Reginald Andre Jackson and others take the stage with Mount) it’s the language that Joshi focuses on. “I think some of the most theatrical and moving storytelling can happen when all you have is language and actors on a bare stage.”

At the beginning of February, the stage at Seattle Shakespeare Company will be bare when the production of Richard II ends (The Importance of Being Earnest opens in March). Joshi will return to her academic pursuits at Seattle University. In the spring she plans on directing a production of Charles Mee’s Big Love.