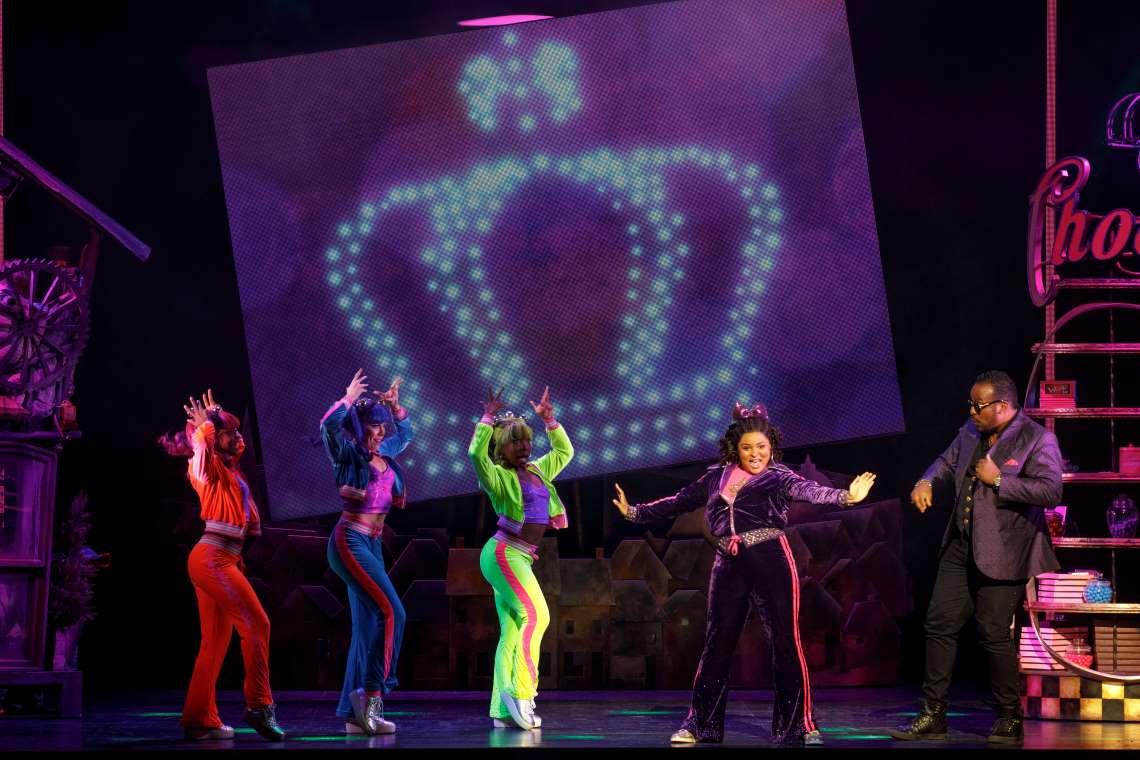 Seattle audiences will spot a familiar face in the touring production of Roald Dahl’s Charlie and the Chocolate Factory landing at The Paramount Theatre at the end of this month. Playing the father of golden ticket recipient Violet, David Samuel hopes that greater diversity in the show will help children connect with a story that he’s loved for years. He talked to Encore Spotlight about his “late” start in musical theatre, why diversity is so important in casting, and what type of chocolate he’d make in his factory.

Rosemary Jones: In earlier interviews, you mentioned that you came to musical theatre late. What inspired you to try this career?

David Samuel: When I say I came to musical theatre late, I mean that I didn’t have the typical “I grew up in dance classes and singing lessons from the age of five” story. I started considering musical theatre around the age of 19, when I took a musical theatre history class as a part of my degree requirements at the University of Maryland, College Park. I had a number of great teachers at that school, and Scot Reese was the musical theatre professor. I then went to graduate school at Brown University/Trinity Rep for my MFA in Acting. In that program we had a lovely singing teacher, Kathryn Jennings, as well as our head of voice and speech, Thom Jones. He really made me believe I had a voice, and I can’t thank him enough.

What were your earliest experiences as a professional actor after college?

After graduate school I moved to New York City and musicals were not really on my mind. I did Shakespeare Off-Broadway at Classic Stage Company and as the universe would have it, my first show was with a who’s who of New York actors, one of them being André De Shields.

A few months after our show closed, André called me and asked if I wanted to be in the upcoming production that he was directing of Ain’t Misbehavin’ with Crossroads Theatre at NJPAC. I said yes, and it was the most challenging thing I had ever done. The rest of my cast (including Borris Anthony York, who is in this production of Charlie and the Chocolate Factory) was so supportive and shoved with love all through our brief rehearsal process.

All of these experiences and lessons fueled me as I went in and out of audition rooms for months, ending up in front of Telsey Casting Director Rachel Hoffman and the creative team—Jack O’Brien, Matt Lenz, Josh Bergasse and Ali Solomon—for this production. Thankfully, whatever I did in that audition room worked in my favor.

You also worked in Seattle recently. Can you talk a little about what you did here last summer?

Last July, I was fortunate enough to be in The Williams Project’s production of Blood Wedding by Federico García Lorca, playing Leonardo. The Williams Project is a Seattle-based “theatre ensemble that strives to make theatrical excellence accessible to diverse and engaged audiences, while paying our artists a living wage.”

We performed at Equinox Studios, a studio space created for artists and artisans to collaborate, and we had local vendors sell food and drink prior to, and during the show. It was a beautifully immersive experience and I am grateful that Ryan Purcell, the artistic director (and a Brown/Trinity graduate), asked me to be in the production.

In this return visit to Seattle, what do you want to do first in your time off?

When I’m not performing, I’d love to go see The Williams Project’s latest production, The Bar Plays, which is two plays, Small Craft Warnings by Tennessee Williams and The Time of Your Life by William Saroyan, performed in repertory. I’d also love to check out Pike Place or find some live music in the city.

When did you first encounter Charlie and his trip through Willy Wonka’s chocolate factory?

I went to a small Lutheran school in Hyattsville, Maryland and I remember that the 1971 film with Gene Wilder was one of the only things we were allowed to watch. I have very fond memories in primary school and middle school of watching this film, munching on a bag of Cheetos and getting swept up in Charlie’s journey.

Though the Beauregardes are not the focus of the story, I hope with our presence on stage the audience is inspired to imagine and create a more diverse, equitable and inclusive world for themselves and the generations that come after them.

It’s lovely that there’s greater diversity in this version. What do you think it means to the audience to have the Beauregarde family be African American in the musical?

I think diverse, inclusive and equitable representation is extremely important, to say the least. When we were performing in Los Angeles, a young black girl came up to me and said, “You were great! You looked just like my Dad up there.” I was honored that she saw her life reflected back to her through the performances of my castmates and I. A similar interaction happened in Baltimore, when one of our Willy Wonka understudies, Clyde Voce (who made history by being the first African American Willy Wonka), went on for Noah Weisberg. A white mother came up to us holding back tears because by seeing Clyde Voce perform as Willy Wonka, she was able to have the opportunity to explain to her young son the importance of diversity in casting and why people of color should have more opportunities to be seen all across the entertainment landscape.

Though the Beauregardes are not the focus of the story, I hope with our presence on stage the audience is inspired to imagine and create a more diverse, equitable and inclusive world for themselves and the generations that come after them.

Since you’re playing the very proud father of Violet Beauregarde, what Violet moment is your favorite in this show?

First of all, Brynn Williams (who plays Violet Beauregarde) is the sweetest human being and a vocal powerhouse. I learn so much from watching her onstage. All her moments are my favorite. If I had to pick one, it would be something that future audiences may not be able to see but speaks to the skill that Brynn brings to the role of Violet. One night, Violet’s microphone was not working and our audio team handed Brynn a handheld wireless microphone so that she could perform “The Queen of Pop.” She commanded that stage and brought an electricity that could only come from having to commit to a sudden change so quickly. She’s a rock star for that.

So, if you did win a chocolate factory, what would be your treat of choice?

I would try to combine baked goods and chocolate. Some sort of a chocolate bar with brownie bits and caramel.

See David Samuel as Mr. Beauregarde in Charlie and the Chocolate Factory playing at Broadway at The Paramount July 31–August 11. Tickets are available online.