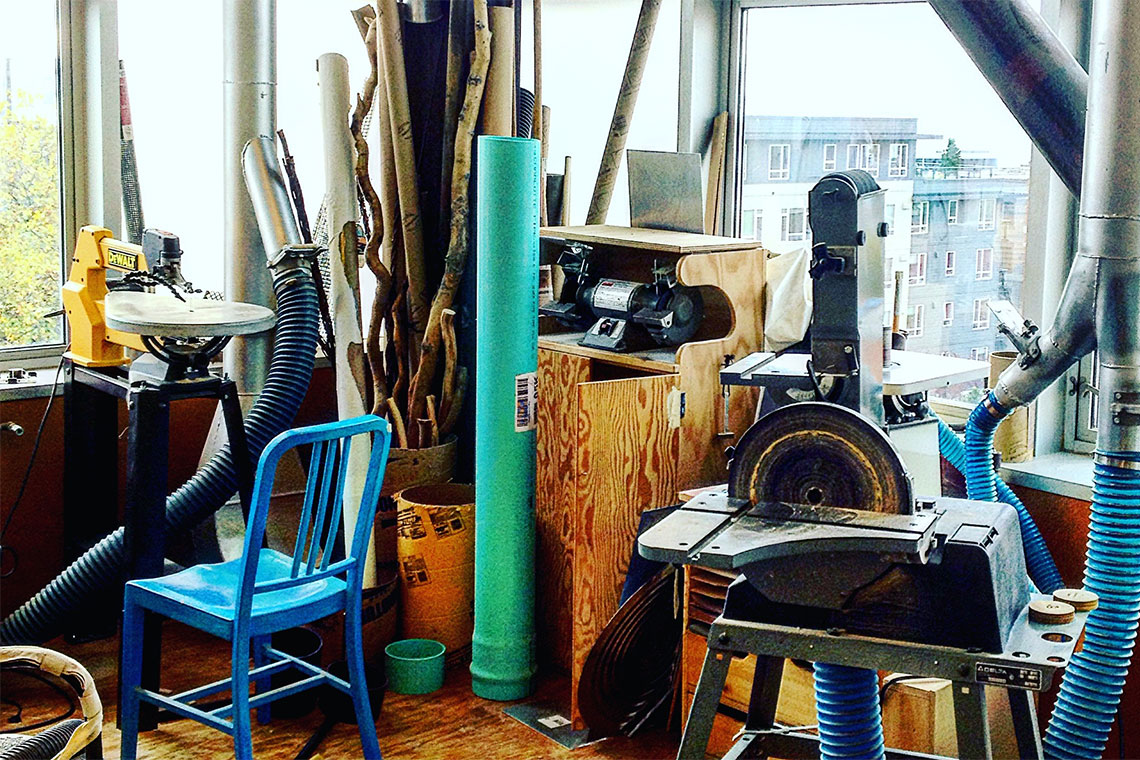 Chitty Chitty Bang Bang, now on stage at the Seattle Children’s Theatre, was first written by Ian Fleming (of James Bond fame) and adapted to the big screen by Roald Dahl (of James and the Giant Peach fame). The film starred Dick Van Dyke and was the tenth most popular at the box office in 1969.

The production at SCT—as with most all other productions of Chitty Chitty Bang Bang—is based on the movie and not the book. How do you bring that movie to life on stage? Start by asking Carey Wong. The scenic designer has over 40 years of experience and has worked with many of the Puget Sound’s most prestigious arts organizations, including the Seattle Repertory Theatre, Tacoma Opera, Village Theatre, and Intiman Theatre. He’s been involved with Seattle Children’s Theatre productions for 20-plus years.

I visited him in tech rehearsal, going behind the scenes to witness the creation of what might be Seattle Children’s Theatre’s most ambitious show.

How do you begin this process?

You start by going to the source material. I read the book, I watched the Disney movie. The Disney movie changed the plot quite a bit from the original book. Fleming’s novel had a lot less adventure and wasn’t going to translate well to film. They reworked it and had Roald Dahl write the screenplay. All the while I’m thinking, how this can translate to the stage?

Do you do this initial brainstorming alone?

I’ve worked with [director and SCT artistic director] Linda Hartzell on many productions together. We begin thinking together about the period, the style, the asthetics of the show. We looked at pictures of English cottages and windmills. We talked a lot about the dichotomy between Britain and Vulgaria [two major settings in the production]. For Britain we wanted it to be rustic and rural. We used a lot of earth tones. For Vulgaria we wanted it to be florid and urban. We used jewel tones. We wanted to make it over-the-top.

What are some of the hurdles you saw for the show?
The car. The key to the show is the car. It does so many things. How can you make that happen, feasibly? It has to drive like a car. It’s a boat, too. But, most importantly, it has to fly. Using winches and turntables, we create stage magic for it to appear to do all those things. It’s a beautiful fabrication. The wheels move. It rotates. It has wings. It’s really something.

What’s next, after you do that initial research?

You think about design. I looked at Ken Adams’s work [the Disney movie designer.] Those are too big for a stage, so how do you scale it down to fit our theatre? You take various designs from all sorts of places and it becomes a hybrid for this particular theatre.

Where else did you get your inspirations for the design concepts?

The original designs of the novel weren’t detailed enough. They didn’t have much in the way of character, so I had to look elsewhere: Edwardian pen-and-ink style sketchbooks and illustrations and Victorian machinery. It was the golden age of cast iron and, at that time, form was as important as function. The Belle Epoque period was a big inspiration for me.

It’s a big production, design-wise, then.

It’s the biggest project I’ve done with Seattle Children’s Theatre. It’s a large cast and there are students from the SCT drama school. There are actually two casts of young performers. It’s big. Further, Potts has all sorts of adventures and there’s various sets that have to be conceived, designed, and created. There’s the Potts’ home, the candy factory, the fair and the country of Vulgaria. There’s a toy shop and a birthday party scene, too. You have to capture the locations visually with spectacle keeping in mind that people are going to be interacting with it.

What are some of the more interesting set pieces?

There’s a breakfast-making machine that cracks eggs, makes toast, cooks sausages and has a conveyor belt to it. There’s a haircutting machine. There’s all sort of devices, gears, and cranks to make these things look real to the audience. That’s the joy of live theatre, in my mind: seeing stage magic. It’s completely mystifying and exciting.

And there’s quite a few props, I imagine.

Props people play a huge part in this production. They translate my drawings into working objects. They mechanize it. The haircutting machine appears to be cutting hair.

How do you get from a sketch on a piece of paper to a set piece?

I don’t sketch much, but I do generate artwork. We then make white models. It’s a little half inch scale model box of the stage and you play around with the sets and the people who will interact with them. You hone in further on design, adding color and detail. Once all that is approved, I start drafting architectural drawings for building cuts, sketch cars. From that, it goes to the tech directors who, with an eye on budget, figure out a way to make it work. “We’ve never built a car like this,” and then they build a car. There’s great joy in this collaboration. I trust them. We all find our strengths and use them.

Then it’s out of your hands as soon as your concepts are delivered to the tech and prop folks?

We collaborate. I comment on the overall feel of the show, but I’m a big-picture designer. I started in opera. I try not to fixate on the details.

Then it’s opening night and you watch the magic happen.

I like that it’s an ephemeral medium. It touches memories, inspires creativity. It sparks. There’s pleasure in it. It makes them think. Art has the enduring power to better peoples’ lives. I love being a part of that.