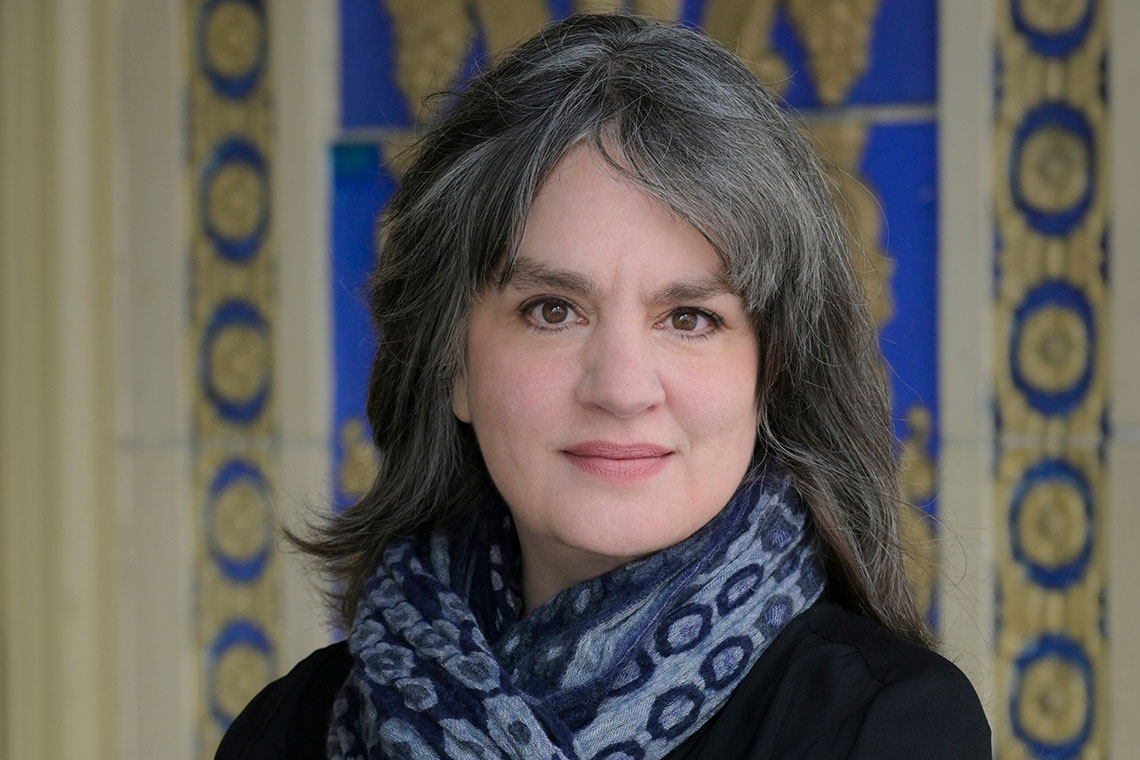 As we collectively mark a full year in nation-wide reclusion, American Conservatory Theater launches A.C.T. Out Loud, a series of play readings challenging audiences to relate to centuries-old works. The event features George Bernard Shaw’s Arms and the Man, a witty comedy set at the end of the Serbo-Bulgarian War.

The play follows Bulgarian noble Raina, who falls in love with the enemy mercenary Bluntschli even though she is already engaged to a Bulgarian war hero. Shaw helps us confront change through Raina and her community as they return to an unfamiliar home.

On the first day of rehearsals for Arms and the Man, I talked with A.C.T. Artistic Director Pam MacKinnon about the theatre scene in the Bay Area, going virtual, and how this 127-year-old play is particularly relevant right now.

Esha Potharaju: A.C.T. is the biggest theatre company in the Bay Area. When you think of the Bay, the uber-rich Silicon Valley giants are the first things that come to mind. But I know the Bay is a lot more than that. It’s a culmination of culture with a history of immigration and revolution imprinted in it. As an arts company, how is A.C.T. influencing its culture scene?

Pam MacKinnon: We’re part of the largest theatre in the San Francisco Bay Area, and as such, we tend to pay artists more than any other theatre in the area. It’s very important. We’re part of an ecosystem. I don’t see us in competition with other theatres. We’re there as an employer. We’re there as a way to make sure that artists, in a very expensive region of the country, can afford to live here, that artists can afford to create, and to bring themselves to step in to doing the work that they want to do. So that’s one aspect of being big.

And also, here we are in a not just region-wide, but a universal shutdown of our art form as we know it. We’ve pivoted to the virtual realm. As a big theatre, we embraced technology really swiftly at the top of this pandemic and encouraged artists to embrace this new medium for theatre…This is an art form that’s normally all about gathering people in person to tell stories, and we just don’t have the ability to do that right now for health reasons. But it doesn’t mean we’ve shut down in any way.

Pam, you’ve said in prior interviews that you believe theatre is a core of human life. It’s how people gather, tell stories and find a sense of belonging. How is your production team planning to emulate that community-like environment virtually for this play?

Arms and the Man started rehearsals today, so that’s one moment of creating community. It’s about bringing actors around the country together with the director Colman Domingo, Christina Dare, who is helping out this amazing company of actors with some voice work, as well as a dramaturg who’s on staff, and a stage manager, and a video designer. And so that’s sort of the first slice of building a community. It’s that rehearsal room, and we’re doing it all virtually. This is a four-day exploration with the great actors of this play. Then, we’re going to edit it and create a video document of this exploration. Then we’ll put it out for ticket buyers. And we have a sliding scale for tickets, so tickets can cost as little as $5 and then sort of go on up.

We’re also making it free for educators and their students, and I see that as community building as well. I mean, I’m hopeful that educators will take us up on it, and there’s a lot of remote learning going on as well. Students of a particular class, even if they’re remote, can watch the play…and get to discuss it, and those discussions are inherently a form of community building. It’s not necessarily the same thing as a group of people gathering together as an audience in a room, but I think as long as the art…fosters conversation, that’s inherently community building. Even in a pandemic.

That’s great. I love that you’ve still managed to preserve the meaning of theatre to you, even while we’re going virtual.

So Arms and the Man will be performed as a staged reading rather than a full production. In that limited format, what changed in the play? And how are you feeling about that?

The fun thing about Arms and the Man in particular is that it’s comedy. I’ve listened to the reading for the first time without any direction, without any work, and it is a laugh-out-loud comedy. And it just keeps on—you have these great moments. You know, it just, it gets whacky really fast. And it sort of ratchets up the tension, and you can feel that in the reading. George Bernard Shaw also wrote very specific stage directions and descriptions of what he thought the room should look like, what the costumes should [look] like. So our director Colman Domingo is going to decide which of those stage directions should be read and which are left to our imagination. So I think that will be a fun way for the audience to experience this play. You know, when you normally stage it, as you said, there’s a set that is built, normally costumes that actors wear, but this is much more basic story-telling theatre. And to have George Bernard Shaw’s elaborate descriptions read will be a different way into this play.

Awesome. So having it read, rather than visually.

Right. You know, in theatre, the audience is that last element that you bring into any theatre project. Your imagination takes over, right, and I think there is something just beautiful that your imagination can fill in those gaps. And that’s what this will be.

I think it’s just so interesting how the way that people interpret art has just kind of changed during this pandemic. A lot of it is left to imagination, but we’re still doing art, and I think that’s great.

And I feel so grateful that there are actors around the country who are joining us in San Francisco virtually to work for four days together. And that just normally wouldn’t happen. We have actors from the Bay Area, actors from New York, actors from Los Angeles, all coming together for four days to tell this story.

Pam, I know you consider Edward Albee’s works as a huge shaping force in your career. He was known for writing thought-provoking and often deeply uncomfortable plays. What about his works held so much appeal to you? Are you letting that shine through your selection of Arms and the Man? I know Arms and the Man is written to be quite thought provoking as well.

I like theatre that makes you question your point of view, even question your values. And Shaw definitely does that. Shaw, like Edward Albee, has a really strong voice. You can tell a Shaw play when you hear it, if you’ve heard or seen Shaw plays, there’s usually some kind of didactic lesson. He sort of sets himself a task to point out hypocrisy or circle something political that he deems important and necessary for people to talk about. And while I think Arms and the Man has that and points out the hypocrisy of heroism or the hypocrisy of posturing that you’re in love without being in love is also just at the core, the play is just so richly drawn. The characters feel vulnerably human, as opposed to just symbols. And so I would say for that reason, yes, he and Edward Albee can be talked about in one sentence.

Why did you select this play to be performed? What about it made you think, “Wow, this is really relevant right now”?

I think there are some timeless themes, [and also some that are relevant to] this moment in a global pandemic…Shaw has written a play with these soldiers returning home from war in various states of fatigue or celebration. And I feel as people start to reunite, as even classrooms and workplaces come together after being remote for so long, there’s something about this returning that feels really relevant. And also, this moment of return, when it need not be a return to what had been, should be a critique of what had been. There’s something about the return that opens up possibility to make it better or make it different. And that feels very of the now.

Wow, I love that. This honestly never even crossed my mind when I was reading up on Arms and the Man.

Yeah, it’s one thing to return from war, but I think that idea of coming back after having this harrowing and completely extraordinary experience and returning home. Well, home has changed while you were gone, and you have changed while you were away, so instead of just assuming that everything goes back to the way it was, get ready, because that’s not going to. And I feel that’s around the corner for us as a society.

As a young person, and given that I’m speaking to someone who really wants everyone to understand the importance of, and have access to theatre, I have to wonder what A.C.T. is doing to make the narrative of Arms and the Man more open to this generation?

It doesn’t need a rendition. It doesn’t need it. Colman Domingo’s first point of direction with the actors was just bring your whole selves. Certainly, the story takes place in the 1880s in Bulgaria, but he’s saying we’re American. We’re Black. We’re white. We’re Latinx. He’s saying it’s 2021. Bring yourself to the emotional and story situations. And we’ll make it sing.

Arms and the Man will be available on demand April 12–18. A watch party will kick off the play’s run on April 12 at 6 p.m. Tickets are available for purchase here.

Esha Potharaju (she/her) is an art and story lover who is passionate about enriching her community through arts involvement. In her free time, you can find Esha participating in student advocacy initiatives and overanalyzing comics and cartoons with her best friend. You can find more of her reviews and interviews on TeenTix.org.

“Arms and the Man” at A.C.T. Sings True as the World Slowly Reopens