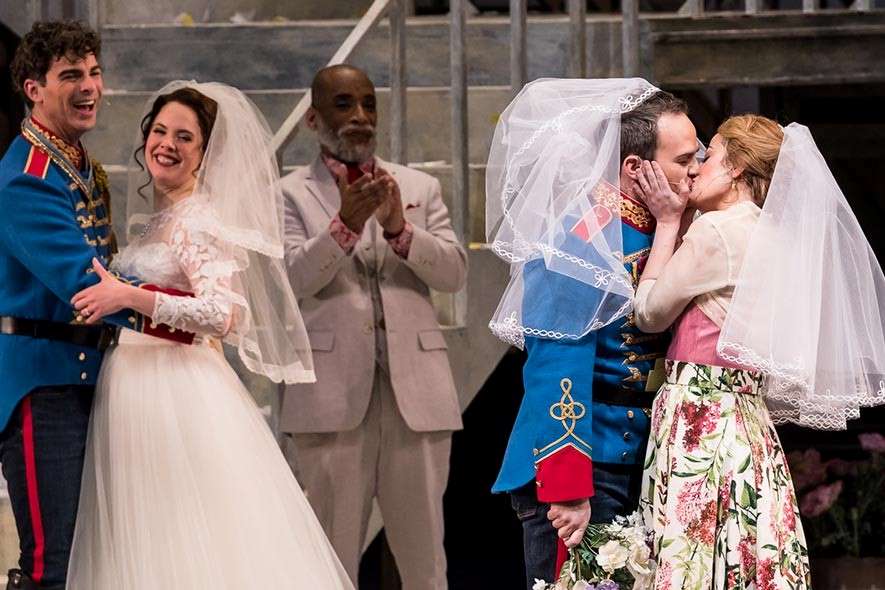 The cast of ‘Beatrice & Benedict.’ Courtesy of Seattle Opera

Tell your friends you’re going to a play and chances are their minds will unconsciously jump to William Shakespeare, the balcony scene in Romeo and Juliet, the pained “Et tu, Brute?” from Julius Caesar, Lady Macbeth scrubbing her hands of blood. Shakespeare is part of our cultural landscape. And soon, permutations of his work will be all over Seattle.

This Spring, nearly twenty-five arts organizations across the city are participating in Seattle Celebrates Shakespeare Festival. I was fortunate enough to speak with artists involved with four of the festival’s productions: Kiss Me, Kate at the 5th Avenue Theatre, Mac Beth at Seattle Repertory Theatre, 12 Ophelias (a play with broken songs) at the University of Washington, and Beatrice & Benedict at the Seattle Opera. Each production promises a thought-provoking and imaginative take on Shakespeare’s original text. But these four productions couldn’t be more different.

Alan Paul recently directed Kiss Me, Kate, a musical adaptation of Shakespeare’s Taming of the Shrew, at the Shakespeare Theatre in Washington, D.C., where he also serves as associate artistic director. The musical, which ran from November 2015 to January 2016, attracted the attention of David Armstrong, 5th Avenue Theatre’s former executive producer and artistic director. Armstrong flew to Washington, D.C. to see the production, and later asked Paul to revive the production in Seattle, for the 5th Avenue Theatre’s contribution to Seattle Celebrates Shakespeare.

“What I am most excited about is the chance to use many of the great Seattle-based actors in the production,” Paul shared. “I was knocked out by the performers I met at our auditions and I know they will bring something special to the show.”

Because Kiss Me, Kate centers on workplace sexual indiscretion in the entertainment industry, albeit through a 1948 lens, the conversation turned to the recent unmasking of pervasive sexual harassment in the film industry and the wider impacts of the #MeToo movement.

“It’s an interesting moment to direct a show that centers around gender politics so frankly and openly,” Paul said. “Kiss Me, Kate is really about how women and men relate to each other—and for all its comic moments, it also has some deep insights. I’m ready to take a new look at Kate and Petruchio, and to re-examine their relationship for 2018.”

The Seattle Repertory Theatre will be premiering writer-director Erica Schmidt’s Mac Beth, an adaptation of Shakespeare’s Macbeth told through the lens of seven young women. The adaptation promises to examine the dangerous effects of ambition as the line between real life and murderous fantasy increasingly becomes more and more blurred.

“I find her work as a director and playwright boldly imaginative and artistically sensitive,” Abraham said of Schmidt’s work.

The two of them began discussing Mac Beth three years ago – around the same time Seattle Repertory Theatre was considering their own participation in the festival. Abraham brought Schmidt to Seattle in 2016 for a workshop of the play and a public showing of the work in progress as part of the theatre’s new play program, The Other Season. In Abraham’s mind, it’s a natural fit for the theatre and for Seattle as a whole.

“There’s something daring about seven young women performing this play,” Abraham said. “It’s one of Shakespeare’s bloodiest works and we’re still conditioned as a culture to associate violence with men. Erica’s adaptation makes the violence feel dangerous and complicates Shakespeare’s rich insight into the creative and destructive forces within us all.”

Mac Beth runs May 18 to June 17 at the Seattle Repertory Theatre.

Amanda Friou first encountered Shakespeare at seven years old. Friou sat in the audience of a production of Comedy of Errors, understanding the language of physical comedy when iambic pentameter eluded. And while those early Shakespeare experiences are enough to scare away even some adult audience members, Friou stuck with the Bard.

“We spent what felt like months studying Macbeth,” Friou said, remembering her high school English classes. “We did these exhaustive text excavation exercises where we had to find the most used words in a scene and write about the implication of their use—things like that. I really credit that teacher for giving me my first tools for breaking open any dramatic text. Little did I know that she was essentially teaching me to be my own dramaturg.”

Friou is a second year MFA directing student at the University of Washington where she is directing Caridad Svich’s 12 Ophelias (a play with broken songs), an adaptation of Shakespeare’s Hamlet. She approaches directing from an intersectionally feminist perspective, tending to gravitate toward new plays by female and transgender playwrights.

“I love Shakespeare on the page, but for the most part his plays aren’t stories I have a passion to tell,” Friou said. She doesn’t see Shakespeare as a particularly feminist playwright. “With this show, I got to dig into Hamlet and tell a feminist story. I get the poetry and the romance and the drama. But I also get to give a previously one-dimensional female character a voice of her own. The power of that act is incredible, especially when I’m surrounded by an all-female creative team, an all-female band, and a cast that includes nine women.”

Our conversation about feminism naturally turned to the gradual unmasking of toxic masculinity in today’s society.

“Caridad Svitch has done an excellent job of highlighting the ways in which the traps of misogyny catch everyone—Hamlet, or in our case Rude Boy, included,” Friou said. “I had no idea when I chose this play a year ago that our production would coincide with the beginning of the #MeToo movement, but the essence of the movement really is at the heart of this play.”

12 Ophelias (a play with broken songs) ran February 13 to 25 at the University of Washington.

The Seattle Opera production of Beatrice & Benedict will be a unique experience for even the most diehard opera fan. This production of the Hector Berlioz adaptation of Much Ado About Nothing is not only being translated into English from the original French; Seattle Opera general director Aidan Lang has made the bold decision to expand the world of the opera to include scenes from Shakespeare’s original text.

“The great advantage that Beatrice & Benedict has over other Shakespeare operas is that it uses dialogue, rather than sung musical forms to move the plot on – much like musical theater,” Lang said.

“We felt that given the context of the Seattle Celebrates Shakespeare Festival, Beatrice & Benedict gave us the opportunity to lean into the original Shakespeare—more than any other opera we considered.”

Because of this production’s relationship to Shakespeare’s original dialogue, Lang was adamant about hiring a theatre director to take the helm.

“As well as being ACT’s artistic director, John Langs is also a wonderful director of Shakespeare,” Lang said. “We don’t want this production to seem like a conventional opera, but more like going to the theatre or to a musical.”

It’s a bold direction that Lang is looking forward to sharing with the rest of Seattle.

“The premise is timeless, and anyone can identify with the characters that drive the story,” Mack said. “The undeniable attraction between Beatrice and Benedict and the resulting over-the-top rejection of each other is the stuff that romantic comedies are made of. At its heart, it is a story about finding one’s way to love, but its other themes—including deception, infidelity, and the gender roles we play—are just as engaging.”

Mack and I spoke before rehearsals were underway and she shared that she’s most looking forward to rehearsing with so many dear friends. She shared that it feels more like play and less like work when the room is filled with people she knows and that this production is a rare and delightful opportunity to skip the sometimes awkward process of feeling out the energy of the rehearsal room.

“Dramatically, Beatrice is a wonderfully complex character,” Mack said. “She is strong, spunky, has a razor-sharp wit, but she has moments where she shows immense vulnerability too. As a bonus, the sparring that she gets to do with Benedict will be doubly fun, since I get to perform opposite my real-life husband.”

Beatrice & Benedict runs February 24 to March 10 at the Seattle Opera.

There’s so much to see during Seattle Celebrates Shakespeare. Catch any of the upcoming performances in this piece or any of the other Shakespeare-inspired pieces coming soon, including Sergei Prokofiev’s Romeo & Juliet performed by the Seattle Symphony and an immersive multi-room adaptation of Hamlet by the Horse in Motion at the Stimson-Green Mansion. And while you’re sitting in the audience, take a moment to revel in the fact that even 400 years after his death, William Shakespeare’s words continue to inspire artists worldwide. We’re just lucky enough to have an embarrassment of riches in our own backyard.