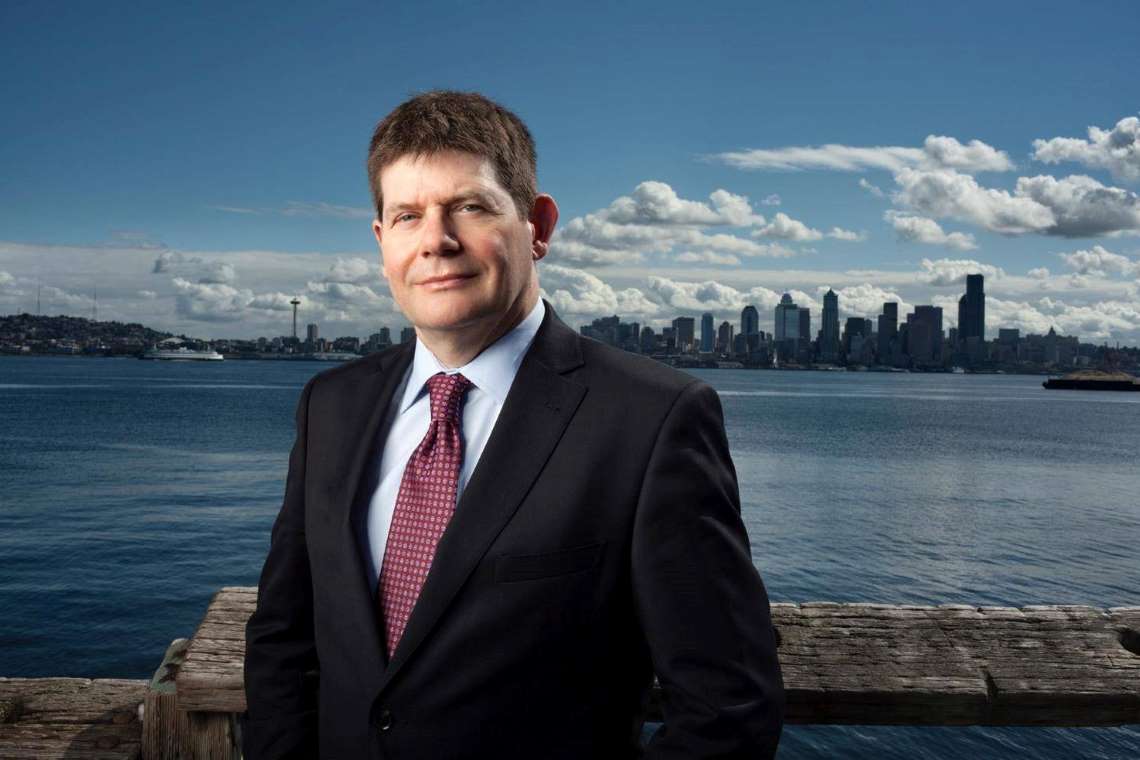 When General Director Aidan Lang departs Seattle Opera later this month to become general director of Welsh National Opera, it’ll be a bittersweet departure. After five years at Seattle Opera—a relatively short tenure for a general director—Lang is returning to the opera company that started his career.

“Why when we’ve cracked it do I want to go?” Lang asked himself, reflecting on how the Opera has truly engaged and expanded its audience during his time. “But the company has a huge place in my heart.”

The company he’s referring to is Welsh National Opera, where Lang got his start as a staff director in 1985. But it’s clear Seattle Opera occupies significant real estate in his heart as well. His five-year tenure was shorter than he anticipated, but he has high hopes for the future of the company and the opera community as a whole.

“As I move on, the company moves on,” Lang said. “It moves on because society will move on to change. It’s good for organizations to develop and change as well. As soon as things get stagnated, the audience feels it. And god knows our society is shifting so fast. We have to be reflective of that.”

Christina Scheppelmann, artistic director of Barcelona’s Gran Teatre del Liceu, will be stepping into the role in August. Lang was out of town during Scheppelmann’s onsite interviews, but he’s had the opportunity to speak with her several times since the appointment became official.

“One thing which has been really exciting is the way that racial social equity has become an important part of the conversation,” Lang said. “Christina met with our equity team and understood that importance. We’ve been really proud of the work we’ve done so far. And the way we’ve embedded this thinking within the organization.”

Lang noted that for Scheppelmann, who hadn’t worked in the United States in six or seven years, racial and social equity wasn’t a pressing concern. But once she understood the priority Seattle Opera places on equity, diversity and inclusion in every level of their programming, she was on board and ready to work.

Scheppelmann won’t have the opportunity to plan her own season of operas until the 2020-21 season, but Lang has been consciously seeking her input whenever possible. The opera is as much hers as it is his at this point, and the collaborative decision making seems to suit Lang.

Of all the initiatives Lang has spearheaded during his five-year term at Seattle Opera—introducing the chamber opera series, expanding the youth programming both inside and outside of schools, and opening the new Seattle Opera headquarters, just to name a few—he’s most proud of Seattle Opera nearly quadrupling its millennial audience.

“It’s also easy for an arts organization to be so excited about what they do, that they forget the reason they do it is for an audience,” Lang said.

He went on to say that opera has always suffered from the incorrect perception that the art form is aloof—an elevated entertainment for a certain type of person. Through research funded by the Wallace Foundation, the Opera had the opportunity to truly analyze their audience demographics and began taking steps to actively engage them in the work on stage.

“I’ve heard some young people say it’s actually quite cool to go to the opera,” Lang said. “Which is such a good thing for us to hear.”

Lang has been focused on making Seattle Opera more accessible for all audiences.

“You know, it’s very easy for organizations to rightfully be very proud of what they achieve, especially if they achieve good stuff,” Lang said. “But that’s not the purpose. The purpose is the experience we get with the audience. It’s the only reason we’re here. Without an audience it’s a rehearsal. I’ve always said that.”

Thinking back on his career at Seattle Opera, Lang remembers the pre-production days of Beatrice & Benedict in 2018 fondly. Lang brought on two fellow artistic leaders to help him rework the classic Hector Berlioz opera: John Langs of ACT Theatre and Ludovic Morlot of the Seattle Symphony.

“You know, what we devised, honestly is a better piece than what Berlioz gave,” Lang said.

The way Lang tells it, Berlioz had completely removed the emotional core of Much Ado About Nothing from the opera, leaving audiences with two witty lovers and nothing to hold onto. Langs and Lang would pull from the original Shakespeare while Morlot found additional Berlioz music to score those scenes.

“I’m so proud of what we did,” Lang said. “I mean, it may have had some flaws along the way. It’s never going to be perfect. But as a concept, I thought it was a real example of three organizations coming together in a creative manner. It was so memorable, actually.”

While there are no plans for this particular version of Beatrice & Benedict to be performed again, Lang feels like it would do really well in a conservatory setting.

“You know, it’s out and about that this version exists now, and I’d love to see it on again by someone else,” Lang said.

While Lang has plans to visit Seattle many times in the future, his first visit unfortunately won’t be lining up with the opera he’s most looking forward to this coming season.

“I’m really upset to miss the Rigoletto,” Lang said. “It’s a production we did at New Zealand Opera, directed by Lindy Hume. And it’s contemporary. It was actually inspired by Silvio Berlusconi, the former Italian prime minister who was always getting caught in scandal.”

When Giuseppe Verdi first premiered the opera in 1851, he wanted audiences to see their own contemporary world, reflecting the corrupt power of the ruling aristocracy on stage. The opera was censored and it wasn’t until Verdi agreed to set the opera in Renaissance Italy that the production was permitted to move forward.

“You know, people say opera always has to be in the time the composer saw it,” Lang said. “But if we do that, we’re doing exactly what the censors did. We’re putting it back in history, and it’s losing its impact.”

When New Zealand Opera produced this reimagined Rigoletto in 2012, it was slightly ahead of its time. With its up to the minute contemporary costumes and settings, New Zealand Opera’s Rigoletto examined the danger of political power and the ways that power could be used to inflict sexual abuse and assault without consequence. It was a #MeToo era opera without the hashtag.

“He’s a young, charismatic, newly elected prime minister or president, whatever, whichever,” Lang said. “It’s not clear. It doesn’t need to be clear. And that’s exactly what this piece is about. It’s about this guy who isn’t just a playboy and some idle Renaissance aristocrat. He’s the political leader. And he’s corrupt. And this production makes it totally clear and potent.”

After a breath, Lang lamented his absence in the audience once more.

“I’m sorry to miss that because everyone’s in for an absolute thought-provoking treat,” he said. “The best Rigoletto I’ve ever seen. I was so pleased we could bring it here. I’m sad I’m not going to see it.”

After I asked my final question, Lang offered to take me on a tour of the new Seattle Opera headquarters. As he guided me from the admin offices to the rehearsal rooms to the Opera’s dedicated loading dock to McCaw Hall, he greeted every employee by name, asking them about their day and thanking them for their work. It was clear from our interview that Lang’s passion for Seattle Opera and the people who work there ran deep. But it wasn’t until these off-mic moments, these stolen moments of comradery in hallways and rehearsal halls, that I was able to see that passion reflected right back.

It feels fitting to close with a quote from Seattle Opera’s founder Glynn Ross, a quote from June 4, 1969 that’s prominently displayed in the lobby of the new headquarters, greeting employees and visitors alike.

“We are not custodians of the old order,” Ross said. “We are not curators of establishment art. We must be oriented towards the future. It is our business to improve the quality of life. We had better become positive and not just stand by.”

It’s a sentiment Lang echoed over the course of our conversation. And it’s one Seattle Opera will continue to hold dear for many years to come.

Rigoletto will be the first show in Seattle Opera’s 2019-20 season, playing August 10–28. Tickets are available online.