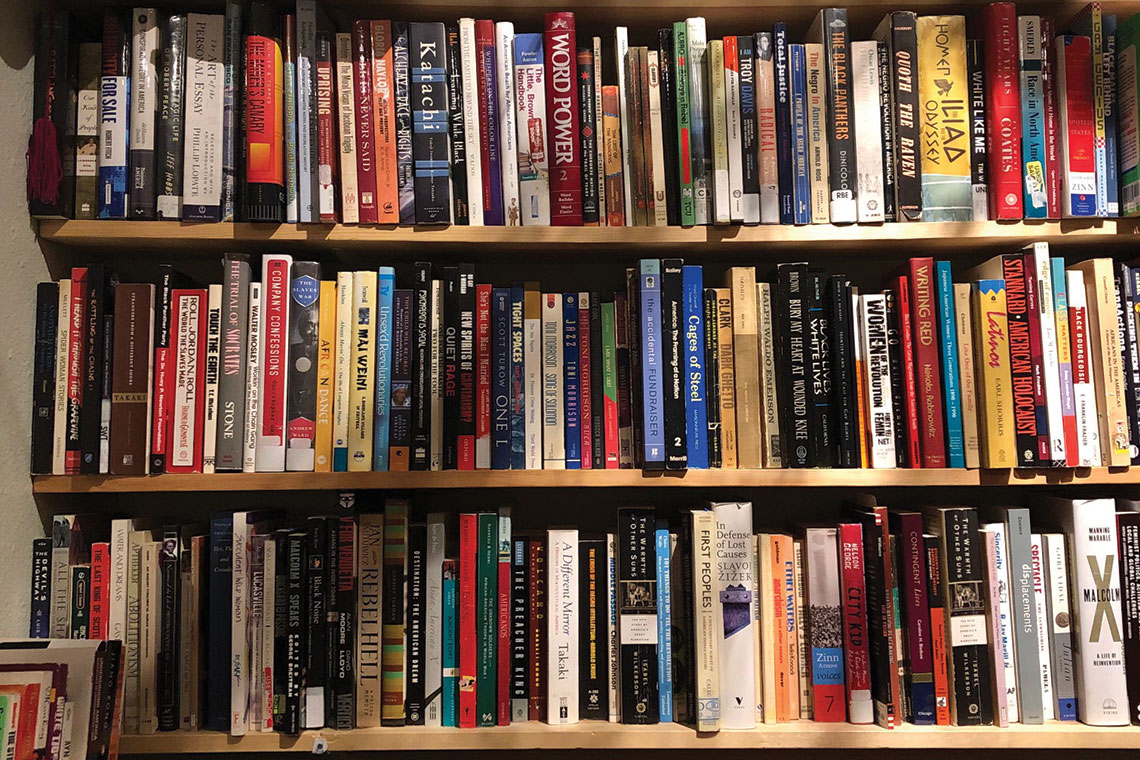 In an unassuming building that used to be home to a wine bar, a community library and bookstore lies, ready to be explored. With a focus on social justice, ethnic studies and liberation movements, Estelita’s Library is open to anyone and has something for everyone.

Invisible Man, by Ralph Ellison. Ceremony, by Leslie Marmon Silko. To Be Young, Gifted and Black, adapted by Robert Nemiroff. There is no order to the books on the shelves. There is an element of discovery. Chinese Communism and the Rise of Mao, by Benjamin Schwartz. The Souls of Black Folk, by W.E.B. Du Bois. Homer’s The Iliad. It’s like someone’s den. A few shelves long against one wall. Another shelf on the far wall with paperbacks. Most of all the books dealing with race, politics, gender, justice. Crazy Laws and Lawsuits: A Collection of Bizarre Court Cases and Legal Rules, by Robert Allen.

The books on the shelves have been placed there by Edwin Lindo. He’s never run a library before. He teaches at the University of Washington with the Department of Family Medicine. He got his BS in Business Administration/International Relations from the University of the Pacific in Stockton, California and a Doctor of Jurisprudence degree from the UW School of Law. He’s never worked in a bookstore, either. He runs this place—Estelita’s social justice library, bookstore and community space crammed into a little space on Beacon Hill. It’s across the street from El Centro de la Raza and behind a place called Chop House—a beauty salon.

Estelita’s was in a wine bar. The old counter now has vintage Black Panther comic books in it, old Black Scholar magazines, too. There are “Democracy is Power” postcards available for the taking. On the walls—African masks, tree branches with little bird nests in them (art created by local Briar Bates). Paper skeletons sweep across the front window. There are Che Guevara posters. An upright piano is shoved in by the window. There’s a church pew. There are a couple of tables with burgundy tablecloths on them to read, or commiserate, or to play chess.

The Responsibility of Intellectuals, by Noam Chomsky. The Buddha in the Attic, by Julie Otsuka. Long Walk to Freedom, by Nelson Mandela.

“This is the sort of place I grew up in,” Lindo says. He grew up in the Bay Area to a Nicaraguan father and a Salvadoran mother. His dad would take him to a restaurant where there would frequently be discussions of art and politics, books and the news of the day.

“I wanted to bring that here,” he says. “I hated books, I didn’t really start reading until after college. It was when I started listening to my elders that I started reading. They told me that books are where the secrets lie.”

The books on the shelves are mostly his own. It’s an interesting collection. Behind the counter he has piles of The Black Panther newspapers. The official newspaper of the Black Panther Party began in 1967, founded by Huey P. Newton and Bobby Seale. He believes he may have the greatest collection of them in the world. Approximately 400 editions of the paper were created. He’s got 380 of them. He’s angling to get the whole set. “I tried to show them off to Bobby Seale. He said, ‘Cool, cool.’”

The library is named after his daughter, Estelita, and opened in March 2018. The library operates through membership. From $30 to $50 or so, you can have access to the books (about 1,200 are in circulation now and he’s always looking for suitable donations) and have the books for a two-week stretch. Currently, Estelita has 336 members. “It’s amazing,” Lindo says of the growth. And more, the non-profit is already growing. He’s received a grant from the city to open a second location. It’ll be in the Central District. Plans are still being formulated.

The Quran. How to Rap, by Paul Edwards. The Macho Paradox, by Jackson Katz.

More than a place for knowledge to decentralize, it’s a place for the community to gather—play chess, have conversations with strangers, debate. Eager to bring people off the street, Lindo is also wanting to partner with like-minded community organizations. He wants to offer classes, book talks, lectures. “My wife asks me why I spend so much time here,” Lindo says. “It’s because I love it. I can spend hours here—jazz playing on the speakers, people coming in to talk, all these books.”

The Negro Revolution in America, by Louis Harris and William Brink. Native Son, by Richard Wright. Stamped from the Beginning: The Definitive History of Racist Ideas in America, by Ibram X. Kendi.

Teenagers sit in the corner of the shop, peruse the titles and chitchat. It’s raining outside and they didn’t want to go home quite yet. Two old women come in, warmly chatting. Two thirty-somethings come in soon after. They ask Lindo about that night’s poetry open mic. “It’s been cancelled,” Lindo says, reluctantly. But then, “That doesn’t mean you can’t have it anyway,” Lindo tells them.

“That,” Lindo says, smiling. “That right there is what this is all about.”

A Man of the People: Edwin Lindo and Estelita’s Library