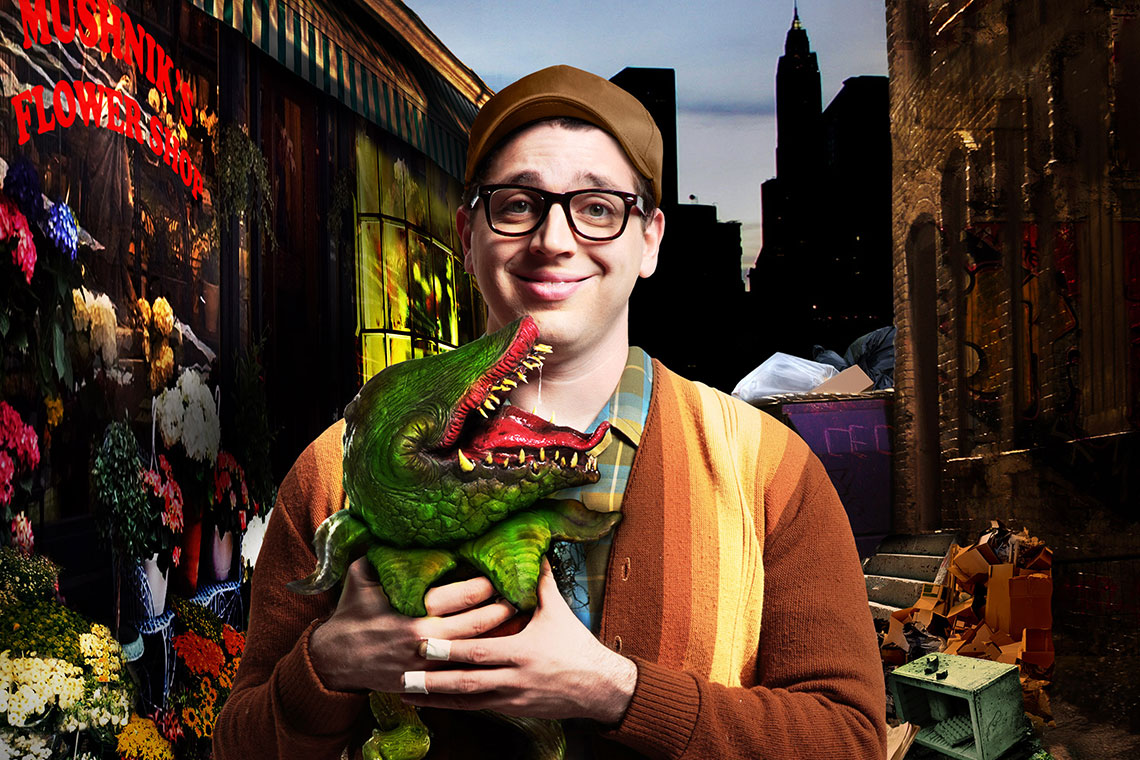 “What I love about Seymour,” says actor Joshua Carter, currently starring in Little Shop of Horrors at ACT Theatre, “is the fact that he’s a comedic character that people invariably love who murders two people and allows the world to end.”

Seymour, of course, is the lead character in the show, a hapless florist shop worker who raises a plant that feeds on human blood. Little Shop is billed as a “comedy horror rock musical,” by composer Alan Menken and writer Howard Ashman. The musical, in turn, is based on a low-budget 1960 horror film of the same name, directed by the legendary Roger Corman.

The show is weird, what with a sadistic dentist, doo-wop singers and, oh yeah, Audrey II, that giant man-eating plant that talks and sings. It’s just the sort of show Carter loves. “Getting to play all that juicy drama while making people laugh and being a little silly? That’s a gift.”

The show, co-produced with the 5th Avenue Theatre, has already been gifted with rave reviews and Carter couldn’t be more pleased. “Seymour is one of those roles I’ve wanted to play my whole career.” His career in Seattle’s theatre scene is certainly on the rise. He appeared recently in Spamalot at the 5th Avenue Theatre, Mary Stuart at ACT, and has returned from the first national tour of the Broadway hit Once. What’s next for him? He doesn’t know. “Performing Little Shop has been an absolute dream and it’d be a shame if I missed the fun because I was worried about what’s next.”

And so, the present: The main role in a beloved musical comedy. “It’s Faust… with an R&B plant. Seriously.” That’s why the story and the show have stood the test of time, and become a cult favorite. It’s a timeless story, Carter believes, because we all do things for immediate short-term gain without worrying, or even thinking about, the long-term effects of our decision. “We’ve all figuratively sold our souls at some point in our lives. It’s a universal and constant struggle.” That universality connects audiences to Seymour, no matter how many bad things Seymour does. “On top of that,” Carter adds, “It’s just so darn fun!”

Fun, indeed. But it’s a tightrope, oftentimes, for revivals to cater to fans of previous iterations while still keeping the show fresh. In the case of Little Shop, there are plenty of previous iterations to contend with. There was Rick Moranis as Seymour in the 1986 Frank Oz movie. There was the original 1960 movie, where a young Jack Nicholson had a role. There was the original 1982 off-Broadway show starring Lee Wilkof that won awards including the New York Drama Critics Circle Award for Best Musical and the Drama Desk Award for Outstanding Musical. “Approach it,” Carter says, “as if it’s never been done before. The folly comes from an attempt at recreation.” By doing it fresh regardless, like in this new production, Carter believes there are new discussions and new discoveries. “It makes the production thrive no matter how many times people have seen it.”

It thrives. With a cast that includes Jessica Skerritt as Audrey, Jeff Steitzer as Mushnik, Eric Esteb as the puppeteer of the plant, Audrey II, and Ekello J. Harrid, Jr. as the voice of Audrey II, the show is full of singing, sweet romance, and murder.

“It’s fun to perform it every night,” Carter says. “I wouldn’t trade a second of it.” Neither would audiences watching Little Shop of Horrors.