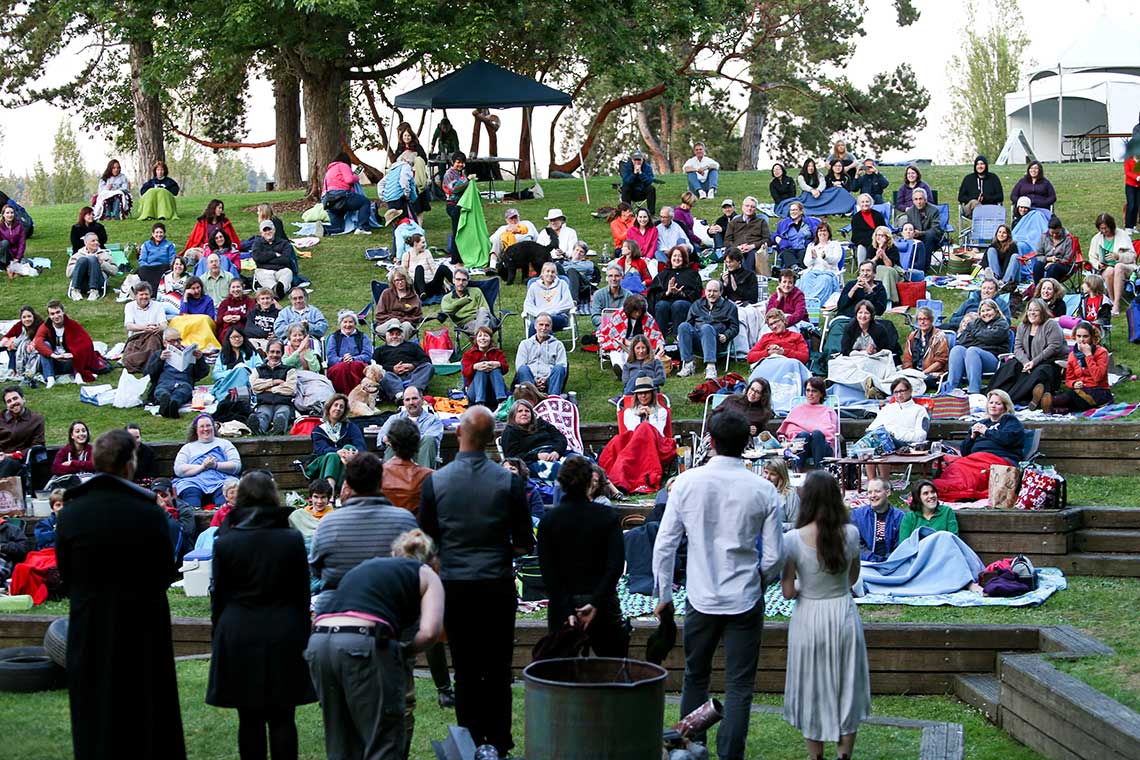 Audience and cast at performance of "The Tempest". Courtesy of Seattle Shakespeare Company

For the past year we have been living in a time of uncertainty—a perpetual “to be or not to be” if you will. But today we have something more to look forward to, the return of Wooden O, Seattle Shakespeare Company’s park series.

This announcement from the classical company is one more bright spot for our community, as many are looking for performance events they can attend while still staying safe. Wooden O offers the perfect solution as the performances take place outdoors at parks around the Puget Sound area. And as if that wasn’t good enough, the performances are always free, a sure way to appeal to those who are not familiar with classical theatre and want to test it out without committing to the cost of a ticket.

The energetic performances are produced in a casual setting—audiences bring their camp chairs, blankets, snacks and drinks, and Seattle Shakespeare Company provides the entertainment, working with minimal sets and props which removes all pretense and just leaves fun. And this year’s show, The Comedy of Errors, is sure to bring the laughs.

“The Comedy of Errors is a shot-in-the-arm of silliness and the perfect show for welcoming back audiences after the year we’ve all had,” said Artistic Director George Mount. “We were originally scheduled to present the play last summer, but as our plans got waylaid, we re-tooled and pared it down. We’ve got five really funny folks ready to jump into all the parts in a mash-up of improv comedy stylings with Shakespeare’s text and story. It’ll be swift. It’ll be entertaining. It’ll be just what Dr. Pinch ordered…in addition to getting a vaccination.”

A Comedy of Errors follows the mishaps and mayhem created by Antipholus and Dromio as they search for their lost family. After arriving in a new city, the two are treated like old friends…but something seems amiss. Soon the pair is thrown into a quagmire of jealous wives, stolen goods, and an enigmatic nun who holds the key to solving the riddle. As the sun starts to set the comic confusion lifts just in time to end with a loopy family reunion.

The Shakespeare in the park series will begin on July 23 and run through August 8. A full calendar of dates is below, and most up-to-date information can be found on Seattle Shakespeare Company’s website.