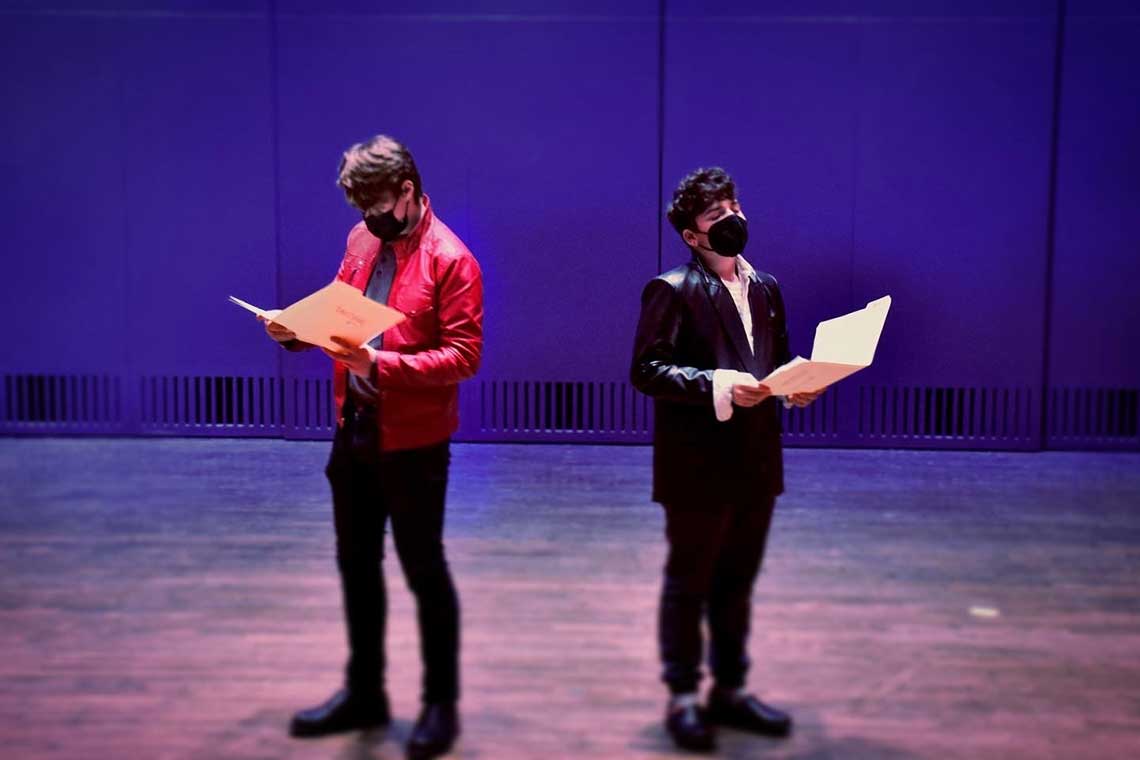 Jamie Lambey and Hersh Powers in "The Mediocre Beyond" at The Bonfire Festival. Photo by Antoinette Garon

16-year-old playwright Valentine Wulf is partnering with Penguin Productions to bring her darkly humorous play featuring a snarky, generationally dysfunctional family to the big stage. Wulf’s work, titled Welcome to the Landfill, is the first play written by a highschooler to receive a full, feature-length production at Penguin Productions. The company hopes it will inspire more youth to bring forward their work. Shana Bestock, the producing artistic director at Penguin Productions, is adamant about the value of producing plays from diverse, young voices: “Without [them], we are lost.”

Welcome to the Landfill is laden with cynical mundanity, lies and disillusionment. The play follows a family of estranged half-siblings who are reunited following a mysterious call about their father’s death. Everyone is hiding their own secrets, which unfurl during a road trip across the Midwest to their father’s supposed funeral home. “I would say it’s a play about family and family dysfunction. It’s a play about expectation and unexpected consequences, and unexpected effects and how we deal with them. Which really resonates with us at this time, right?” said Bestock.

The ensemble starts off with Jim Janson, the grifter mastermind behind the elaborate scheme to gather his children back together. Then comes his oldest son Bernard, a tired middle school physical education teacher in his late forties (“He’s just such a dad,” joked Wulf), and his teenaged son Jeremy, onto whom Bernard projects his unfulfilled childhood hockey dreams. Jim’s second oldest, Elizabeth, is, as Wulf put it, “a micro-influencer mommy-blogger who posts Keto recipes. She calls herself an alpha female.” Her daughter Noelle is a lonely 10-year-old whose identity is consumed by the beauty pageants she competes in. She does not have much company, save for her pet, Karl Barx, who Wulf described as “one of those little crusty white dogs.”

Finally, there is the much younger sibling Vitus, who is a 19-year-old aspiring breakdancer. “He’s not very good,” Wulf sighed. “He’s stuck working at a rundown amusement park and he plays a character called Marnie the Movie Dinosaur because they didn’t want the Barney people to sue them. So he shows up in his mascot costume. He’s just terrible.” Much of the play is set in Vitus’s crammed car, in which Wulf crafts hilariously unexpected interactions that showcase copious family secrets. In doing so, she uses her play to conduct an exploration on the very human motives of her otherwise cartoonish band of characters.

The idea of Welcome to the Landfill has roots in an uncanny speculation made about Wulf’s own grandfather. “My dad and his siblings haven’t talked to him or seen him in forever,” she explained. “And they just got a call from a funeral home one day that he died and that they had to send a check to pay for it. And my dad was sitting there and he goes, ‘This could be a scam. Like what if we just send them the check, and then we drive there—and it’s just an empty lot?’” Her father suggested she write a play about the strange thought. “So I did,” she said, but she also took creative license to make it “much more.” Within three weeks, Wulf had already drafted her vision into a play.

In the fall of 2021, she was selected by Penguin Productions to participate in a cohort of youth playwrights called the Bonfire Collective. Wulf brought her play’s script to the very first meeting, and her fellow cohort members immediately jumped into a cold read of the work. “I’d never heard the script read aloud before. Actually, hearing how it would sound onstage really helped it come together and it helped me see what things I needed to change,” said Wulf. She quickly found that the community of Bonfire Collective writers propelled her story into being the best it could be. They would ask questions that pushed Wulf to rework the script. They would guide her to fleshing out her characters into nuclear personas. And most importantly, they would provide her with a support network to fall back on during her creative journey.

Soon after Wulf completed the Bonfire Collective’s programming, Penguin Productions reached out to her about producing Welcome to the Landfill. “It’s so different from a lot of shows that youth get to perform. There’s no romance, there’s no talking about going to school,” said Artistic Associate Annika Prichard. “It’s really about a non-traditional family who gets pushed together in this set of really weird circumstances. And I think so many know what that feels like.”

Another thing that drew the company to the play was the wildly different age range of its characters. “We shouldn’t just be asking teens to play teens. We should allow them to expand themselves, and this play gives them the opportunity to do so,” said Bestock.

The Bonfire Collective is only one of the completely free theatre education programs that Penguin Productions offers. Its business model intentionally defies that of other theatre companies: “We wanted to entirely eliminate that pay barrier and remove that shame that’s associated with needing financial aid,” said Bestock. The company prioritizes paving an accessible gateway to theatre for youth who need it the most. One strategy it employs is guaranteeing registrees challenging and meaningful roles in play productions, regardless of prior experience. “Theatre is important because it centers humanity. So this question of ‘Why is making it accessible to youth voice[s] important?’ comes down to ‘Because it preserves our humanity,’” said Bestock.

While the Bonfire Collective was transformative for Wulf’s playwriting career, she “caught the theatre bug” a ways back, in the fifth grade. “I started in Youth Theater Northwest, which is all the way in Mercer Island, so I was pretty committed to having my mom drive me to shows,” Wulf chuckled. Her first role was Caliban, a prominent character from the magic-filled Shakespearian drama The Tempest. At the opening performance, Wulf said that “someone’s little grandma came up to me and told me that I was amazing at acting, and that I should never stop. It feels so cliché, but I still think of that moment every day.”

From observing her performance scripts, Wulf taught herself how to write plays and started taking on passion projects in the eighth grade. “Gifts can be squandered, gifts can be shoved into a corner, or gifts can be used,” Bestock said. “Valentine is someone who uses her gifts.”

Wulf is committed to creating togetherness with her play: “Theatre is such a collaborative medium, and I wanted to see how people come together to work on this,” Wulf said. “I’m excited about this because the director, the cast, the set designers might take it somewhere that I hadn’t imagined at all, and there’s this element of surprise to seeing what the finished product might look like.”

The show is set to inspire other teens who don’t know how to take their work to the big stage. Penguin Productions has expressed its enthusiasm for opening this opportunity to teen playwrights. “Work created by youth doesn’t come second to big plays that you’ve heard of before,” said Prichard. “They deserve to be on just as big of a stage, to have just as much attention, and just as much care as these really well-known plays.”

Welcome to the Landfill will have performances on March 19 and 20 at Taproot Theatre’s Isaac Studio Theatre.

Esha Potharaju (she/her) is an avid arts lover based in Fremont, California. She is a firm believer in the importance of diversity in the arts. In her free time, Esha enjoys writing articles, drawing and overanalyzing comics and cartoons with her best friend.