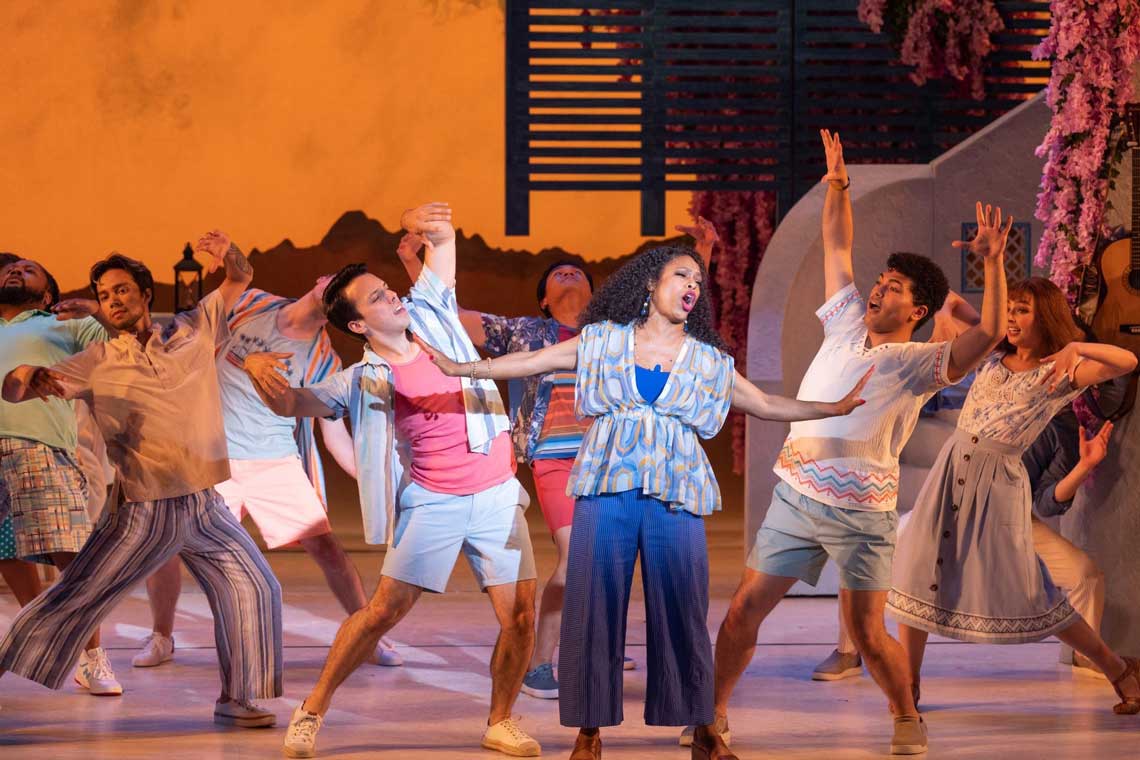 Mamma Mia! has nothing to do with race. However, that is exactly director Faith Bennett Russell’s point; her rendition of Mamma Mia! at Village Theatre takes something familiar and gives it substance through a social lens. Bennett Russell does so by incorporating West African culture and intentionally highlighting actors of color. The deeper meaning is not obvious upon casual viewing, but the production does the concept justice while staying true to the script’s lighthearted tone.

Mamma Mia! was created when producer Judy Craymer hired playwright Catherine Johnson in 1997 to create a jukebox musical compiling the songs of the Swedish pop group ABBA. The somewhat predictable, but entertaining farce Johnson concocted follows a bride-to-be named Sophie who sneakily contacts three of her mother Donna’s former boyfriends to find whom her father is and ask him to walk her down the aisle.

I have seen the film adaptation and three live productions now, but the show is still an utter joy. The group numbers are incredibly catchy and the plot is fluffier than cotton candy.

The first thing I noticed while watching Village’s production is that I forgot how good Johnson’s writing is at concealing that the show is a jukebox musical; if I was told that the songs were created for the show, I would believe it in a heartbeat. In spite of this, I think Johnson should have cut some of the lower-energy duets and solo songs for a tighter and more engaging story.

The actors are all adequate triple threats, but a few of the performances are notable. Lisa Estridge’s charismatic Donna shines while Varinique Davis’ uniquely sassy Sophie is hit-or-miss. The show begins with Davis performing “I Have a Dream” as if each lyric has a beat to hit with no sense of cohesion. Luckily, her immersion in the character increases over the course of the show.

As Donna’s former boyfriends, Shabazz Green (Sam Carmichael) is a pleasure to the ears while Mark Emerson (Harry Bright) delivers most of the night’s laughs. Nate Tenenbaum (Bill Austin) is both eccentric and vocally impressive, but I don’t find his portrayal of Bill as funny as those I have seen in past productions.

Much of the show’s choreography is lively and captures the spirit of the soundtrack. The titular number’s lighting and blocking hilariously transports the audience into Donna’s mind by freezing the world of the show, but its inventiveness doesn’t feel consistent with the staging of the other numbers.

On the other hand, the typical showstopper “Dancing Queen” starts abruptly and is shockingly unmemorable. This illustrates that if staged poorly, even great music can easily lose its energy.

In addition, some of the staging is uncomfortably bawdy: for example, “Honey, Honey” is filled with lewd physicality compared to the giggly interpretations I’m used to seeing. Although I am all for vulgarity in musical theatre (two of my favorite musicals are The Book of Mormon and Avenue Q), I find the conventional approach to the song in other productions funnier and more charming.

Nonetheless, the cast and creative team dazzle, delight, and deliver everything you could want from the show: humor, heart, and energy. In this way, it is a very traditional production of the show, with an emphasis on promoting artists of color (something I’ve appreciated seeing a lot this season across Seattle theatres).

Although the show features strong BIPOC representation, the audience is largely white. I am happy that Village has started providing more opportunities to BIPOC artists to tell their stories and I’m also glad that they are creating fresh interpretations of classic musicals to reflect our current values as a society. Next, I think it is important for the theatre to continue increasing accessibility so their work can serve and be seen by the community it intends to uplift.

Mamma Mia! Is playing at Village Theatre Issaquah now through July 10. The show will then move to Everett to play July 15 through August 7. Tickets are now available online.

Kyle Gerstel is a 15-year-old musical theatre geek who couldn’t be happier to have found TeenTix in 2020. In addition to writing for the TeenTix Newsroom and his school newspaper The Islander, Kyle frequently performs with Youth Theatre Northwest and works with Penguin Productions to foster an equitable theatre community. When not in rehearsal, you can probably find him writing poetry, rewatching Promising Young Woman or obsessing over Bo Burnham.

This article was written on special assignment for The Seattle Times through the TeenTix Press Corps, a teen arts journalism program sponsored by TeenTix, a youth empowerment and arts access nonprofit organization.