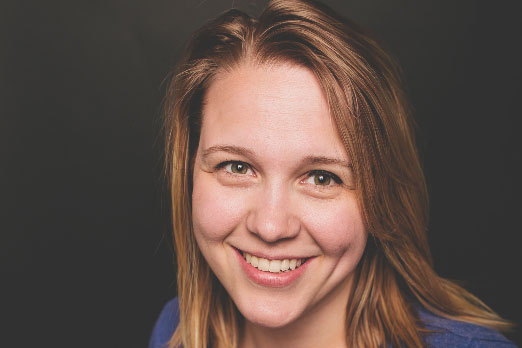 Bobbin Ramsey has lived and breathed Seattle art her entire life. This 27-year-old theatre and film director has touched almost every arts organization in town: from attending Seattle Children’s Theatre as a child to volunteering at the Vera Project in high school to internships at Intiman and Book-It Repertory Theatre. She even attended the University of Washington, obtaining degrees in Drama and Creative Writing.

Today, Bobbin serves as Lead Producer at The Horse in Motion, a theatre company she founded with members of her University of Washington cohort, as well as Casting Director and Resident Director at Washington Ensemble Theatre (WET). In addition to directing for both The Horse in Motion and WET, Bobbin freelances for a number of theatres around town, including Cornish College of the Arts, Live Girls! Theatre Company, and her alma mater, the University of Washington.

In anticipation of her upcoming production of The Nether at WET, Bobbin spoke with us about directing urgent new work, championing female-identifying playwrights, and the shows that she’s looking forward to seeing.

The Nether feels especially relevant—both because of Seattle’s booming tech sphere and in the conversations we’re having nationwide about consent. In what ways do you think this play will challenge WET’s audiences?

The Nether asks questions about the lawful and ethical responsibility that our society has towards sex and technology, in a very extreme way. As we approach the reality of Jennifer Haley’s imagined world, we are forced to grapple with the responsibility we have to one another. I think that this play challenges all audiences who see it, because it forces the viewer to hold two seemingly contradictory ideas at the same time. For WET audiences in particular, I think we are dipping our toe into a subject matter that is even more divisive and difficult to talk about than most of our work. WET often thrives in taking on the plays that other theatre companies shy away from, and our audiences are usually willing to join us for that theatrical ride. Even though the play handles intense subject matter, I think that our audience will be willing to go there with us.

Has this play changed the way you think about directing and working with actors?

I’m not sure, we haven’t started rehearsals yet. But I have been thinking about how to make sure the rehearsal space feels safe and comfortable—and has some levity to it, given the intensity of the piece. One of the actors and I have already been talking about having nightly dance parties so we never leave rehearsal in a dark headspace. But overall, I think the process is going to be about approaching the subject matter carefully and consciously with enough openness to have frank conversations, while still recognizing the emotional labor that goes into the work.

In addition to directing, you’re a co-founder and lead producer at The Horse in Motion. Talk to us about the piece you’re putting together for On the Boards’ Northwest New Works Festival in June. What drew you to this subject matter?

We are so excited to be performing at Northwest New Works this year! It has always been one of my favorite performance festivals in Seattle and I am so excited for The Horse in Motion to be participating. Almost a year ago, we came across an article about the Mallus Maleficarum which was the 15th century German document that became the basis for all western European and American witch hunts in the subsequent centuries. Then, in November, we were all inspired by Lindy West’s article “Yes, This Is a Witch Hunt. I’m a Witch and I’m Hunting You.’ in the New York Times. We’ve been exploring and creating a piece of theatre that inverses the traditional witch hunt narratives, where witches are real and powerful. We’re also questioning what this new narrative means in context of this major cultural shift we are experiencing.

I think that The Horse in Motion and On the Boards are both always looking for new ways to engage in societal conversations through theatrical lenses, and that is what we would like to do with this piece. Additionally, The Horse in Motion always strives to push the boundaries of how we theatricalize our work, in large part because many of us have been inspired by the work we’ve seen at On the Boards. Now it’s our turn to create a piece of theatre that plays with style, tone and spectacle.

I am very lucky to be a part of two theatre companies where I have a major say in what gets produced. With my work with WET and The Horse in Motion, the work that is produced by both companies is decided by each of the ensembles of the companies. When season planning, I am always advocating for producing the work of female-identifying playwrights, especially new plays. As I grow in my career and expand the list of companies that I work with, I will continue to prioritize putting the voices of contemporary female-identifying artists and playwrights from other marginalized groups on stage.

How do you hope to grow and challenge the theatre community here in Seattle?

I want to continue pushing boundaries of what type of work we make and what stories we tell. There is so much excellent work being developed in this city right now, and we need to continue to push towards making that work accessible to all types of audiences, both financially and emotionally. There is so much amazing work being created that include important conversations about equity and social justice, and as a director and producer, I want to push myself to make sure that the people of this city have the ability to engage with that work.

Are there any musicians, dancers, or theatre artists that you’re especially excited about this season? Who are you excited to see?

Oh, there are so many! I mean, Meme Garcia is back in town. I saw her solo show at 18th & Union in November and was completely blown away. Her artistic voice is so powerful and beautiful. I can’t wait to see more of her performances throughout the city this year, especially in The Wolves at ACT and in the original work she creates. I continue to be an avid follower of Alice Gosti’s work, and I am extremely excited to see her piece at On the Boards this March. Alice’s work with durational performance has always been totally captivating to me, and as a big fan of Brecht, I am very excited to see Alice’s investigation of capitalism and object. The other project that I’m eager to see is Frank Boyd and Libby King’s Patti and the Kid. I’ve been a huge fan girl of both Libby and Frank since seeing their work with The TEAM in New York. The fact that they’re doing an exploration of Waiting for Godot mixed with dystopian American myth is so appealing to all of my artistic senses.

Washington Ensemble Theatre’s production of The Nether runs April 27 to May 14. Hamlet, The Horse in Motion’s next production, runs April 12 to 29 at The Stimson-Green Mansion.