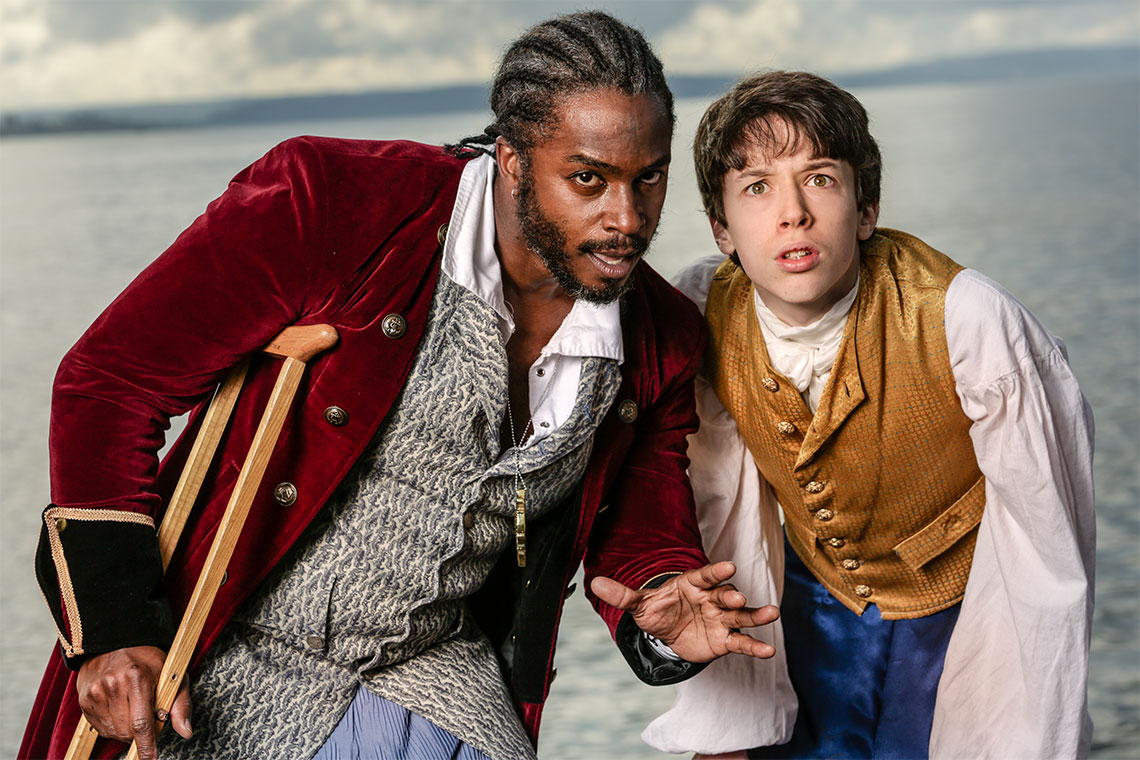 What does a pirate sound like? The company of Book-It’s production of Treasure Island is endeavoring to find out, hard at work on perfecting their dialects.

“We want to present sounds to the audience that sound right—authentic, genuine,” says the production’s dialect coach, Alyssa Keene. Keen has been a dialect coach at Seattle Shakespeare Company, ACT Theatre, and Taproot Theatre. As a dialect coach, she works closely with actors throughout the rehearsal process to get their voices just right for the part.

Crafting and practicing dialects is a lot of work for both the actors and the dialect coach, but it’s an essential part of performing a character. “You study. You read. You learn,” explains Geoffery Simmons, who plays Long John Silver in Treasure Island, “When you discover the voice of a character, it opens up a whole new world.”

“Each accent tells a different story,” says Gin Hammond, an actor in Treasure Island who also happens to be a dialect coach in her own right. “Each sound out of someone’s mouth can teach us something about that person.” What is it like to have a voice coach when you are a voice coach yourself? “It’s a luxury,” Hammond says. “As an actor, I can just do the business of acting, knowing there’s someone there to help. It’s a safety net.”

Keene, who has worked as a professional actor, voice talent, and dialect coach since 2000, says her process starts with a careful reading of the script and research. She discovers the origins of the characters and the setting of the play, noting the time period. “A Londoner today doesn’t sound like a Londoner 100 years ago,” she says, by way of example.

Next, she listens to a wide variety of source material: online sources like YouTube videos and the Speech Accent Archive, documentaries, first-person sources, and more. Though mimicry is part of the research process, it’s just one small part of how Keene prepares to work on a production. She listens carefully for the cadence and melody of a particular accent. Is the accent in a major or minor key? For emphasis, do speakers change their pitch, their volume, or both? How do speakers move their mouths? What do their vowels sound like? The more questions about an accent Keene can answer, the better prepared she is for rehearsal.

For Hammond, who plays two roles in Book-It’s production, dialect work starts wtih the physical. Hammond considers the mouth’s posture for a given dialect, and how it is different from her natural speech. She notes where the sound resonates and how much air is used to make different sounds. With Keene’s help, she determines the physical motions of her characters’ speech as a way to get them to sound just right.

For particularly tricky words, dialect coaches can turn to “accent tag” videos on YouTube. This is a popular type of YouTube video in which people worldwide record themselves pronouncing a certain set of words (“aunt,” “roof,” “New Orleans,” “mayonaisse,” “pajamas,” etc.) and answer questions (“What do you call gym shoes?” “What do you call your grandparents?”) giving viewers access to a particular accent.

Simmons, in the iconic role of Long John Silver, has perhaps the biggest challenge in the play: he wants to honor the character’s history and legacy, while bringing something of himself to the character. Simmons has been on several Seattle stages, including Seattle Children’s Theatre and Intiman Theatre.

For Treasure Island, he has been practicing his Jamaican accent. “If you look back at that time, the high seas were a melting pot of all sorts of people and cultures,” Simmons says. “It was a time of exploration and colonization. There were sugar plantations. The spice trade. The slave trade was happening.“ And Long John Silver, Simmons hypothesizes, probably spoke in several different vernaculars himself. “He had to play different characters for different people at a dark time. It’s exciting to play someone and get into their subconscious and psyche.”

Long John Silver isn’t the only character in Treasure Island with dialect challenges. When the company gathers at rehearsal and starts warming up, there’s a mix of many different ways to talk like a pirate, which is exactly what Keene wants.

“What is the tapestry of sounds that we can use?” Keene asks. By weaving the cast’s voices together she helps create the world of Treasure Island—a world populated with characters from Scotland and Jamaica and the places in between. Dialect research and practice is a huge part of how the actors tell the story of where their characters are from and where they are going. But if they do their jobs right, the accent work won’t look like work at all.

For Simmons, the research into the world of Treasure Island offers a chance to play off the other actors in a more informed way and allows him to further dig into his character. “There are so many elements to this thing,” he says. “You get to see the undercurrents of civilization.”