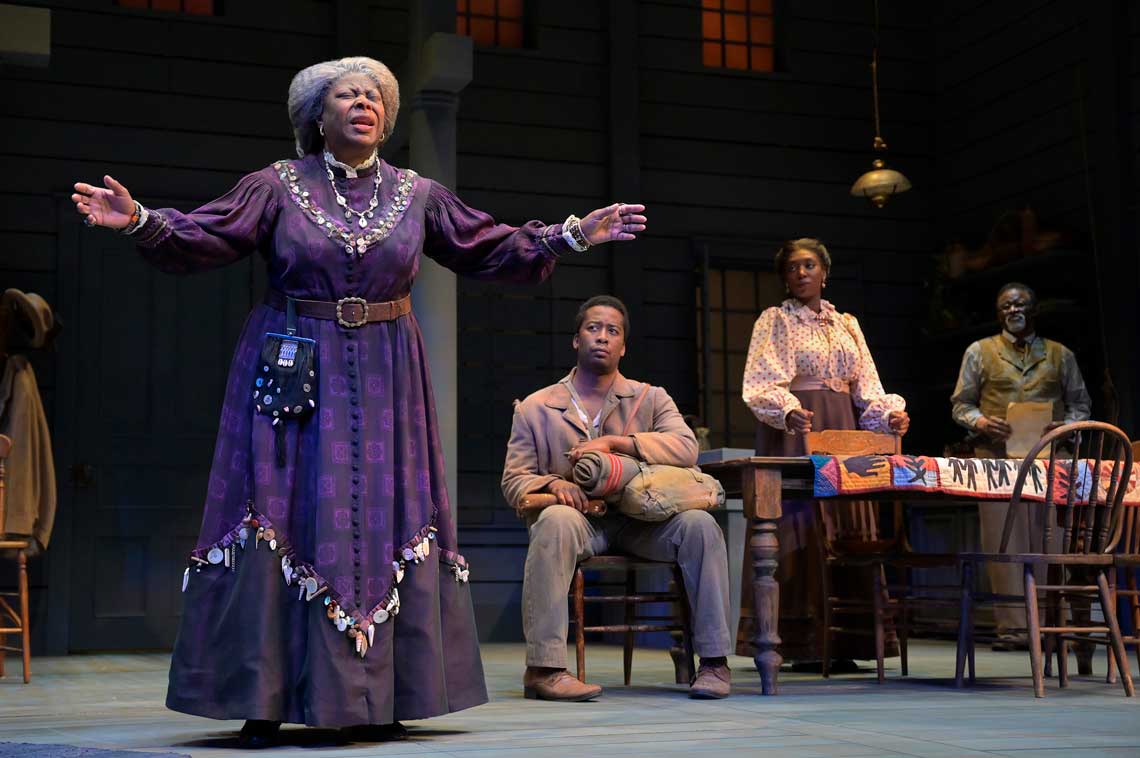 "Gem of the Ocean" star Greta Oglesby (left) will return to TheatreWorks in the titular role of "Fannie: The Music and Life of Fannie Lou Hamer." Photo by Kevin Berne

The 52nd season of TheatreWorks Silicon Valley has been announced. The Tony-winning theatre will present six shows beginning in November 2022 and ending in August 2023.

“We invite audiences to lift their voices with us this season,” said Artistic Director Tim Bond. “In celebration that live, in-person theatre has returned; in awe for thrilling moments of joy and theatricality; in unison as we share these diverse stories of global cultures, people, and perspectives. TheatreWorks’ 52nd Season will include six incredible shows, full of the joy and passion you have come to expect from our Tony Award-winning company.”

The season kicks off in November with the fan favorite musical Little Shop of Horrors (November 30–December 24, 2022). The setting of this campy show will be moved to San Francisco’s Chinatown and the production will highlight a multicultural cast. Little Shop of Horrors features a score by Alan Menken and Howard Ashman, the Academy Award-winning duo behind Disney’s The Little Mermaid, Beauty and the Beast, and Aladdin.

Next comes the West Coast Premiere of In Every Generation (January 18–February 12, 2023). The winner of the National Jewish Playwriting Content, this multi-generational, multi-lingual, multicultural play takes a time-traveling voyage through four millennia of Passover seders past, present, and future. In Every Generation is written by Ali Viterbi and directed by Michael Barakiva.

In March, TheatreWorks will present Fannie: The Music and Life of Fannie Lou Hamer (March 8–April 2, 2023). Award-winning actor Greta Oglesby, who starred in TheatreWorks’ Gem of the Ocean earlier this year, will return to play Fannie Lou Hamer. Artistic Director Tim Bond will direct this musical which follows the famed civil rights activist in her inspiring gospel journey to justice, from sharecropper to co-founding the Mississippi Freedom Democratic Party and becoming an outspoken voice for African American voting rights. The musical is written by Cheryl L. West.

Continuing the season will be the World Premiere of A Distinct Society (April 5–30, 2023). This play from Kareen Fahmy was developed during the 2021 TheatreWorks New Works Festival Online. In this moving play, a quiet library that straddles United States and Canada becomes the battlefield for border control. As an Iranian family separated by the Muslim travel ban seeks refuge within its doors, the library’s occupants grapple with the power of the law versus the powers of the heart. TheatreWorks Artistic Associate and Director of New Works Giovanna Sardelli will direct this play that is presented in association with Salt Lake City’s Pioneer Theatre.

Up next is Steel Magnolias (June 7–July 2, 2023), directed by actor and director Elizabeth Carter. Written by Robert Harling, this beloved play follows a tight-knit group of Southern women who flock to Truvy’s beauty parlor, where its occupants dish gossip, do hair, and provide strength and support through life’s joys and tragedies. The comic drama enjoyed high acclaim during its run on Off-Broadway before being adapted into the beloved film.

The season closes with the World Premiere of Alice Bliss (July 12–August 6, 2023). This musical is based on the book by Laura Harrington and was commissioned by Playwrights Horizons and TheatreWorks. Set in upstate New York during the Iraq War, this new musical is an intimate and stunning tale of a family seeking hope in the midst of crisis as headstrong teenager Alice struggles to hold them together.

Season subscriptions are now available online. Single tickets will be available in November 2022.