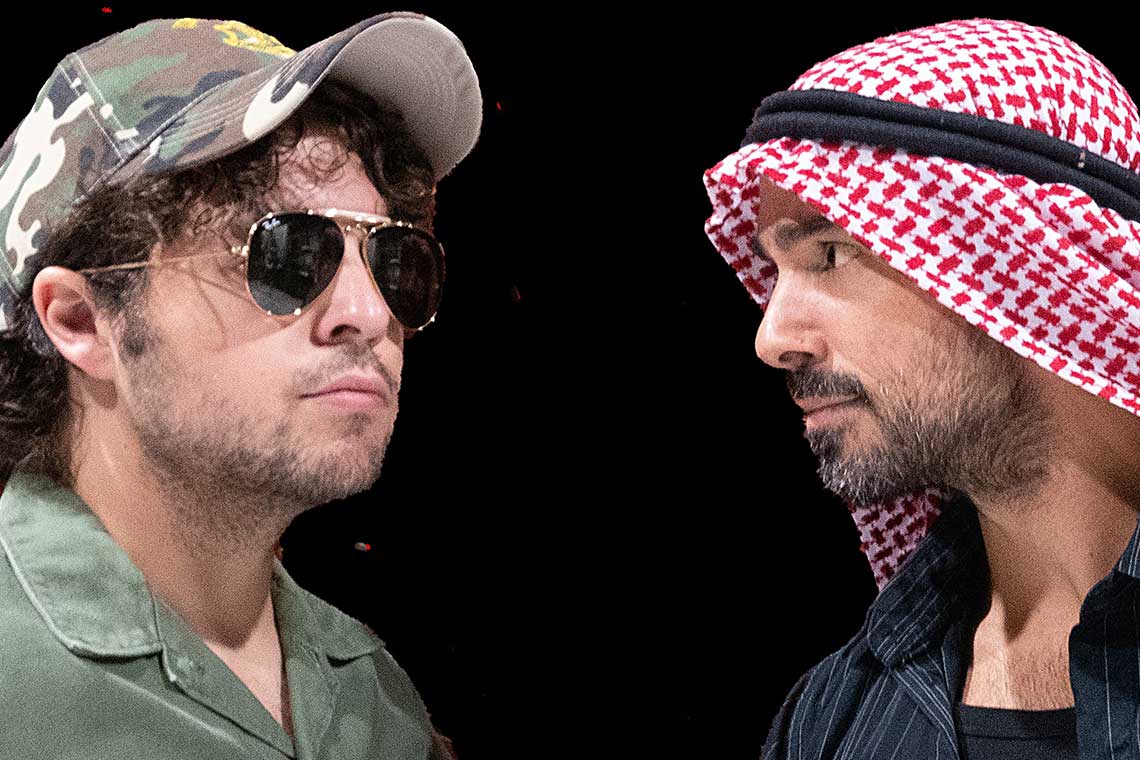 Michael Strauss as Yitzhak and Netanel Bellaishe as Ismail. Photo by Paul Bestock

The world premiere of Abraham’s Land tackles one of the world’s most tragic, enduring and intractable geopolitical conflicts—Israel and Palestine—with the three lead roles played by Jewish-American, Israeli, and Palestinian-American actors.

Seattle’s vibrant theatre community returns to live performance after the pandemic with the world premiere of Abraham’s Land, an original musical by Seattle playwright, Lauren Goldman Marshall and Pulitzer-nominated composer, Roger Ames, in association with Theatre of Possibility. In addition to in-person performances on July 15–18, the musical will be livestreamed nationally and internationally, with the goal of reaching audiences in the Middle East.

Abraham’s Land tells a human story set against the backdrop of the Israeli occupation of Palestine during the First Intifada. Israeli Sergeant Yitzhak prides himself on being an ethical soldier, but when a Palestinian demonstration in Jerusalem appears threatening, he fatally shoots the provocateur, Ismail. Devastated to learn that the victim was unarmed, Yitzhak is haunted by Ismail’s ghost. Disguising himself as a Palestinian, Yitzhak journeys to a refugee camp in Gaza to return Ismail’s identity card and ask his family for forgiveness. In the process, he experiences the humanity of the other side and the darker aspect of his own. Ultimately, he must choose between making amends and his duty to his country.

With recent changes in Israeli leadership, increasing tensions and violence in the region, the reexamination of the United States’ role in the Middle East, and the rise of antisemitism, Islamophobia, racism and tribalism in the United States and abroad, this work is especially timely.

“I am honored to pursue justice through this art form. One of my desires is that audience members would allow themselves to lean into discomfort, look within, and hopefully leave grappling with some larger questions,” said cast member Chandry Abreu.

Thirty years in the making, Abraham’s Land began as a Jewish/Palestinian collaboration, by Lauren Goldman Marshall, Hanna Eady, and David Nafissian, and was first performed in Seattle in 1992. Marshall further developed it with Palestinian and Israeli youth at Seeds of Peace International Camp in 1999. The current rendition features a new libretto and score.

In efforts to ensure the musical is more than just a performance for audiences, each showing will be followed by a post-play discussion, with representatives from local Jewish and Muslim communities. In addition, the Saturday performance will feature a pre-show talk by a visiting public health professional and mother from Gaza, Alaa Hammouda, who will share her story from her perspective as a 30-year resident of Gaza. An interactive workshop on Saturday 1–3 p.m. will use techniques from Theater of the Oppressed to explore issues in the play.

“The content shows political knowledge of the situation and it has characterization, psychological depth and transformation. The writing is amazing. Not didactic, not judgmental, not righteous, just heart and human,” said Vibha Thompson, an audience member from the 2019 workshop.

Abraham’s Land will run July 15–18 at the Kirkland Performance Center. Tickets to live performances and the livestream are available online or by calling 425.893.9900.