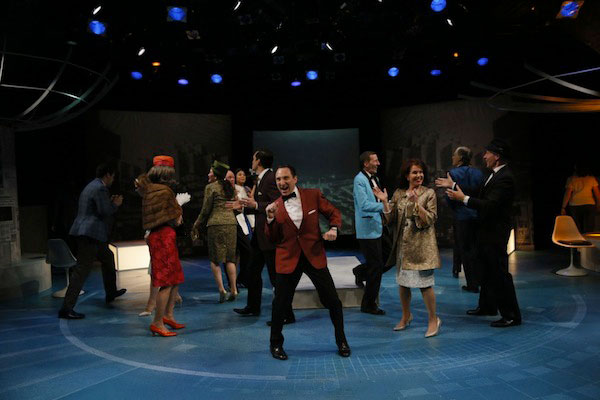 Cast of Truth Like the Sun - Book-It Rep Chris Bennion

When the World’’s Fair came to Seattle in 1962, this corner of the Northwest finally landed on the international map. From April through October of that year ten million people, filled with space age wonder, visited this uppermost corner of the country. The Space Needle arose. The Project Mercury capsule that carried Alan Shepard into space was on display. The monorail, “the world’s first full-scale rapid-transit system,” took off. The World of Tomorrow exhibit, billed as a “21-minute tour of the future,” featured a giant spherical hydraulic elevator made of acrylic glass—called, fittingly, the Bubbleator. Count Basie performed; Lawrence Welk did, too. Jackson Pollock and Georgia O’Keeffe paintings hung in the Fine Arts Pavilion. Ed Sullivan did live broadcasts under the Space Needle. Elvis Presley visited and made a movie, It Happened at the World’s Fair. More than 50 years later, Jim Lynch tapped into this pivotal period for his novel Truth Like the Sun, and Book-It Repertory Theatre jumped at the chance to bring his Seattle-centric work to the stage.

“I wanted to write a novel that cut to the core of Seattle,” Lynch recently told Jane Jones, who adapted and is directing Truth Like the Sun for Book-It. “And the World’s Fair has always loomed in the recent past as this coming-out party for this young, ambitious city. The audacity of the fair is what struck me as quintessentially Seattle… so I wanted to mesh the fair with modern Seattle and see if I couldn’t come up with a storyline that could weave the two Seattles together into something illuminating.”

Truth Like the Sun is Lynch’s third novel, a political thriller firmly set in those two Seattles—the glory of the 1962 World’s Fair and the glory of 2001, in the gold rush technology boom times after Microsoft’s ascendency. The story is that of fictional Roger Morgan, a mastermind who brings the fair to Seattle, eager to make the city famous. The novel, and subsequent theatrical adaptation, blends that time in his life and forty years later when he’s running for mayor in hopes of bringing Seattle back to its former glory. Gumming up the works is an eager reporter, Helen Gulanos, who is looking into Morgan’s career to see who he really is and to see where his power comes from.

“There is much marveling to be done as Truth Like the Sun unfolds,” wrote The New York Times. The Dallas Morning News called Lynch’s work, “taut and accomplished,” while The London Independent raved, Lynch is “a consummate stylist.”

No one hailed the work louder than Book-It, which quickly snapped up the rights to produce the work on stage. “You write about our region and community from an insider’s perspective,” Jones recently told Lynch in an Encore Arts Program article. “You’re local… and your narrative really suits the Book-It style… You write people we either think we know or want to know.”

Book-It is staging the production about the World’s Fair at the Seattle Center, itself created for the World’s Fair. Adapted from the novel by Jones and Kevin McKeon, it stars Chris Ensweiler as Roger Morgan and Jennifer Lee Taylor as Helen Gulanos. The cast also includes Northern Exposure alum Cynthia Geary, McKeon, and Chad Kelderman, amongst others. “Putting the fair on stage has probably been the trickiest,” Jones admitted. “We have a cast of 15 and are representing an event that drew 115,000 people a day at closing. But we like challenges, and a lot of really smart artists are spending a lot of time making those impressions.”

Book-It has long been impressed with Lynch, a former Seattle Times reporter and current Olympia resident. With Truth Like the Sun up and running, the company has officially staged all three of Lynch’s novels. His 2006 debut, The Highest Tide, is a coming-of-age novel set along the tide flats of south Puget Sound. Book-It staged it in 2008. Border Songs, about a border patrol agent along the rural western end of the U.S.-Canada border, was published in 2009, and won the Washington State Book Award for Fiction. Book-It staged that production to rave reviews in 2011. And now, running on stage through May 18, is Truth Like the Sun, another Lynch play that places him firmly on Book-It’s theatre map. There, right next to the Space Needle.