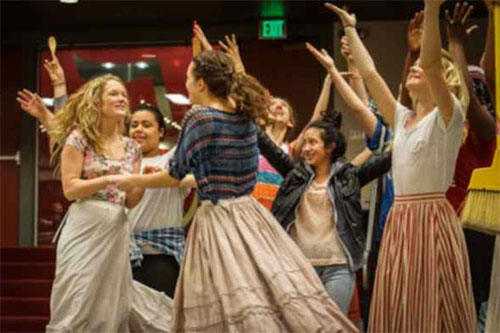 The 5th Avenue Theatre’s Rising Star Project puts kids in charge of a mainstage production with training and support from in-house professionals. This year’s show is Rodgers and Hammerstein’s Carousel, performed entirely by students with a student tech crew, running March 13 and 14. Even the administrative work, from fundraising to marketing, is run by the kids. It’s a big institutional undertaking that will reap long dividends in talent development, giving youngsters unprecedented access to the inner workings of a large theatre house.

Last week I visited 5thh Ave to observe a safety walk-through for the massive spinning turntablethat occupies most of the stage for Carousel. It’s been a while since I spent time in a roomful of teens, and I’m not sure what I expected—spitballs, screeching and incessant texting?—but my preconceptions were laughably off-base. The students were as focused and driven as the seasoned professionals who stood alongside them.

Program director Orlando Morales gathered the cast and crew and reminded them to plug the upcoming performances on Twitter and Facebook (has a generation ever been more media-savvy?) and in-house tech pros led a tour of the backstage layout. Then they rotated the turntable so the actors could familiarize themselves with the peculiar technique of walking on its moving surface. As the massive wheel revolved teens ambled, strutted, duckwalked, skipped and sauntered, each expressing their individuality while remaining intent on the larger endeavor at hand.

Mathew Wright has directed each of the Rising Star shows since the program’s inception in 2012. Last fall he was appointed ArtsWest’s new artistic director, but he’s back for another round. “Every year I learn as much from them as I hope they do from us,” says Wright, “It’s hugely instructive. It’s a great playground as a director, too, to try out different ways of explaining things to different levels of actors and to work those chops.”

I spoke to some of the Rising Star students about their experiences and what they’ve learned so far.

How did you get involved in the Rising Star Project?

I used to be involved in the drama program at the first high school I went to but now I go to a smaller high school that doesn’t have one, so I was looking for an opportunity to do theatre. I applied last year and did Spamalot, and now I’m back again for Carousel.

What are the most valuable things you’ve learned?

Being pushed to always be here five minutes early and get my things done. Being accountable and taking on responsibility and then following through with what I need to do, because if not the show won’t run as smoothly.

What kinds of things have you learned?

I’ve learned a lot about each respective area: lighting, sound, carpentry and now the rail. I’ve learned about how theatre functions, how cast and crew functions, what a call time means.

What do you plan on doing with this knowledge?

I’m hopefully going on to be a chemical engineer, but I’d definitely consider theatre as a career because I enjoy it and I know stuff about it. I could definitely see myself working here in the future.

Does any of that knowledge transfer over to chemical engineering?

I could see lighting or some of the electrician stuff transferring over to physics, but not really to chemical engineering.

What have you learned?

One of the biggest things I’ve learned is that things don’t always go as you’re expecting them to go. We were working on a lobby campaign where we were going to do a curtain speech asking audience members to donate money as they left the theatre. We tried it one night, but it was decided that the curtain speech didn’t go with the artistic vision of the show. We had to adjust our plan to how we were going to still try to raise money while being conscious of the show.

What have you learned about asking people for money to support the arts?

You definitely have to put yourself out there and be willing to take risks, because you never know who might support you. The development team procured items for a silent auction earlier this year. We went to businesses in the downtown area and some places we thought, “Eh, they won’t give us anything,” and they ended up being very generous.

What kind of work have you been doing?

We fundraise money for the show, so we do Kickstarter and lobby campaigns and write emails to ask people to donate to the Rising Star Project.

What have you learned?

It’s an interesting job because no one knows that side of theatre. I’ve learned what they do in the admin office, just a whole other side. A lot of time management, because juggling this with my schoolwork is a lot, and of course college applications. It’s going help me balance everything I’m going to do.

What have you learned so far?

On the orchestra side: how to play in a pit orchestra and lead a group of musicians. We’re playing off of monitors instead of seeing the actual conductor, so that’s a little different.

On the marketing side, I’ve learned how to promote the show through print media, creating postcards and posters, writing press releases, contacting press, taking production photos. There’s so much that goes behind marketing a show.

What have you learned so far?

Professionalism and trying to live in the moment. For a lot of actors it’s hard to still be that character and believe what you’re acting, but it shouldn’t be about acting, it should be that you’re trying to make it into a reality.

How do you stay in the moment?

By not losing focus, not losing sight of things that are in the outside world, staying in character and honestly believing what you say. My director, Mat [Wright], gave us some notes and he said when he was doing acting, he’d always feel like he owed something to that character. What was the character trying to pursue? What’s his main objective?

What are you going to do with this knowledge?

After I’ve learned everything I can—because there’s always new stuff to learn—I hope to take my talent to Los Angeles and pursue my career in acting and movies.