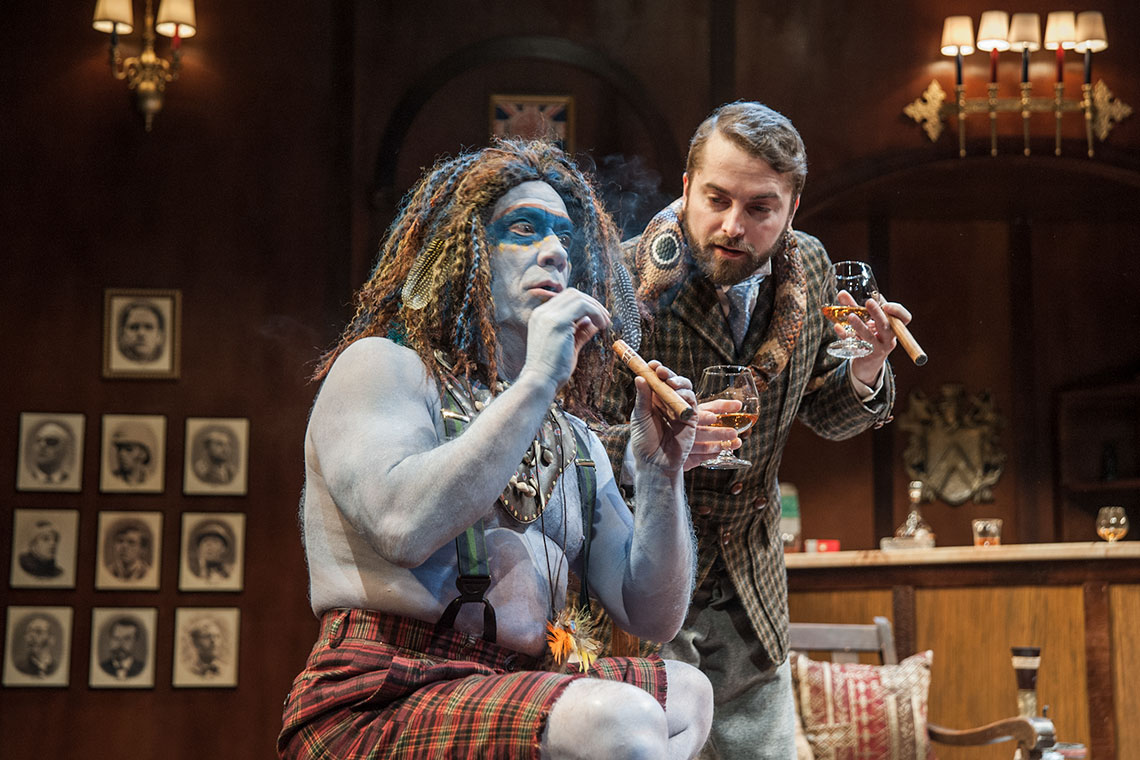 English colonial explorers of the Rudyard Kipling mold were once seen as towering figures of bravery and myth. They discovered lost lands, conquered the natives and brought great animal trophies home for the pleasure of the crown. We can’t take them too seriously these days, however, because we’re more prone to believing things like:

Then again, these guys lived over a hundred years ago during a much different time, so it’s kind of hard to hate them too much. Also, they were British and those accents are just too delightful. I can’t think of a single British person I truly hate (other than that monstrous Thomas Cromwell! Oh, and maybe Hugh Grant).

Taproot Theater’s season-opening play The Explorers Club understands the hilarious, misguided allure of Victorian men of science. It’s a gentle satire that offers five different “Gentlemen Explorers,” each an avatar for a specific brand of stereotypical English absurdity. There’s the stodgy puritan, the prim and polite egghead, the entitled alpha-male and the oblivious ponce (two of them, actually).

Meek but well-meaning Professor Cope (Solomon Davis) attempts to bring progress to his beloved Explorers Club by proposing the induction of it’s first female member, Phyllida Spotte-Hume (Hana Lass), who “discovered” a lost city and has brought home one of its tribal residents (Bill Johns), nicknamed “Luigi” for the sake of brevity. Needless to say, this potential upending of the orthodoxy doesn’t sit well with some of the members, particularly the pious Professor Sloane (Robert Gallaher), who believes that “God created science and God wrote the Bible and the bible tells us to beware the evil woman!”

What happens next goes far beyond the expected battle of the sexes. The play wisely realizes that most of the gender issues involved in this conflict have been well enough litigated by this point. Instead, the familiar conflict and character archetypes provide a necessary foundation for fast-paced, freewheeling absurdity. Make no mistake; The Explorers Club is not about tackling serious issues. The true pleasure of this play is watching a bunch of cartoonish Englishmen played by hilarious American actors bounce off one another with an anarchic energy that at times seems like it might fly right off the rails. Heads are kicked off. Guinea pigs are eaten. Queens are punched.

The Taproot’s uniquely intimate and informal setting only adds to the chaos. The stage juts out into the crowd, giving each seat a unique perspective on the constantly shifting action. The actors lean out into the audience at times, inches away from the people in the front row. When drinks are being literally thrown around (“Brandy and cigars is what separates us from the animals!”) it seems like any of them could easily fly into the third row. No one is truly safe, though fortunately no real poisonous snakes are used in the production, as far as I could tell.

Playwright Nell Benjamin packed the script with great one-liners and exchanges that emphasize the oblivious pomposity of the Professors:

“I once named a mountain after an attractive Sherpa girl. Got nowhere. She said it already had a name.”

“The Irish don’t like being told where they can live.”
“But everybody does it!”

“What we know is what we can touch and feel and kill and stuff!”

Much like those British explorers from Kipling, however, it’s hard to hate these gents. The actors are too well suited to their roles, and they’re clearly having too much fun. Particular standouts are Ryan Childers as the self-aggrandizing idiot Harry Percy, who has a history of ill-fated expeditions (“Its seems as if you walk out of the corner grocery and twenty men die!”) and Hana Lass, who plays more than one character, but I’ve already said too much. You should go see it for yourself. Get close to the action. TO SCIENCE!