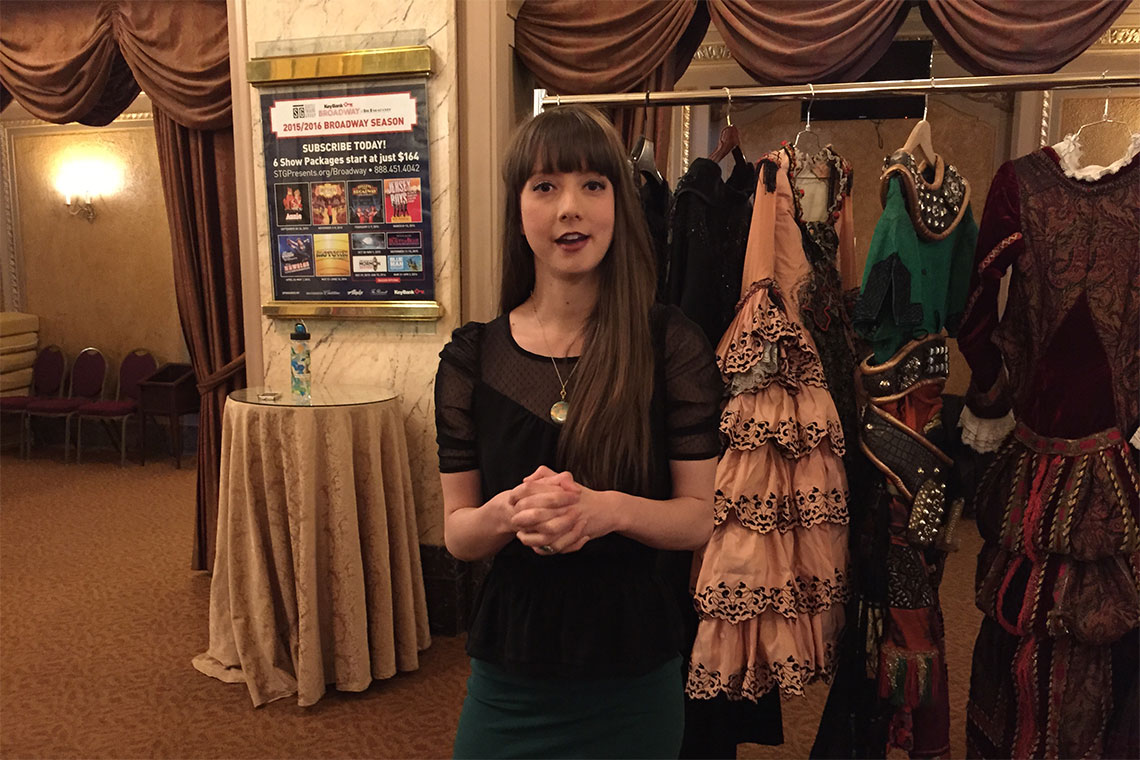 The Phantom of the Opera has arrived in Seattle and it’s a pretty big deal. As far as the world of theatre is concerned, it’s quite literally the biggest deal. Phantom is like the New York Yankees of musicals: nothing else comes close to matching its dominance over the years. It’s the longest running Broadway show ever. It’s sold almost six billion dollars in tickets over its entire run—that’s more than the worldwide grosses of Titanic, Avatar and Alvin and the Chipmunks 3: Chipwrecked combined. It’s got the biggest set pieces, the gaudiest costumes, the most beloved songs. Everybody wants to see this thing, no matter what anybody says or writes. I think the only reason they get the press involved is out of habit at this point.

That’s definitely for the best, because the good people behind the Phantom juggernaut invited me and some of my fellow local entertainment journalists to pop in to the Paramount on Friday to, in the words of stage manager/tour guide Heather Chockley: “do a little press day where we get to talk to a couple actors, we do a little costume spiel, and then we get to see the chandelier.”

I arrived at 11 am and the place was already filled with busy-looking people briskly pushing and pulling things around. I met up with Chockley right on schedule. She is the quintessential stage manager—friendly, efficient, exceedingly knowledgeable and decidedly in control. She has clearly done this press routine at least a quarter of a million times at this point. This junket is probably number 76 on her 500-point to-do list for the day.

This particular tour has been going on for over a year and half, so all of the kinks have been worked out by now. There are 38 cast members, twenty travelling crew, 75 local crew, and a 15-piece orchestra. 1,200 costumes. It takes 20 semi trucks to carry this behemoth show from town to town. It’s a massive, mobile, entertainment machine with thousands of moving parts. According to Chockley, they have “one guy downstairs whose entire job is doing laundry. All day long.” I have no idea why, but that sounds like an awesome job to me. I would have loved to interview that guy. In my imagination, he wears an eye patch. I can’t explain why.

There was a rack of costumes for us to look at and photograph. Chockley knows a lot of stuff about these super famous costumes (“The show has been completely redesigned except for the costumes. It’s hard to update costumes when they’re this amazing to begin with”), but I glaze over a bit when words like “bustle,” “crinolines” and “taffetas” start getting lobbed around. I think she noticed, because she then pulled out the Phantom cape, acknowledging that men generally aren’t very interested in costumes, but they always go nuts over the cape. Fun fact about that cape: it cost about $25 thousand for materials and labor. “That’s more than my car!” Chockley observes.

Then came the actors! I love actors. The lead came down the stairs to greet us, but we were all too slow on the draw to ask any questions and within seconds he bolted to get coffee. “Wait, where did he go?” asked one of my fellow reporters. Katie Travis, who plays Caroline, joined us next. She’s very patient and kind. She looks all of us in the eye and seems very engaged with our questions. “Do you have a routine for relaxing and exploring when you get to new cities?” I ask.

This is a stupid question, but she gives it her best. “I try to explore cities as best as I can, but you have to lay low and take care of your voice, and just do whatever it takes to keep your focus on the show.”

This is a phenomenally talented person who has a lead role in a multi-million dollar entertainment enterprise. This isn’t some kind of lark for her, even if it does involve lots of dancing. “It’s a huge, all-encompassing challenge, but it’s all passion and heart,” she says, and you believe it. Six shows a week. For over a year and a half. She’s living her dream, absolutely, but that doesn’t mean it’s not a hell of a lot of work.

“Okay, they’re ready for us!” Chockley announces. We file into the auditorium and there it is: the famous descending chandelier, fully descended. We’re here specifically to observe it being lit up. I took a video of the event, but another cameraman had to squeeze past me so I stopped filming at the exactmoment of illumination. Of course, it’s not the lighting of the chandelier that’s really spectacular, though it is quite lovely. The money shot is when it drops on the audience. The thing weighs over a ton. “We do make each theater provide us with an engineer’s letter stating that it can withstand the weight,” Chockley explains, which is surely a relief.  But they’re not going to drop it for us today. You have to go to the show to see the real fireworks.

The lighting ceremony is the main event, and immediately afterward we are politely dismissed. There is a show starting in one hour and the frenzy is reaching its peak. Dozens of people are walking and running in every direction, carrying props, costumes, and tables, talking on their headsets. Everyone is moving fast, but nobody seems remotely anxious. They’ve all done this before many, many times. This is a well-oiled fantasy machine. Scores of hardened professionals working long hours in a high-pressure environment for months on end. The end result, if history is any indication, will be an enormous amount of fun.