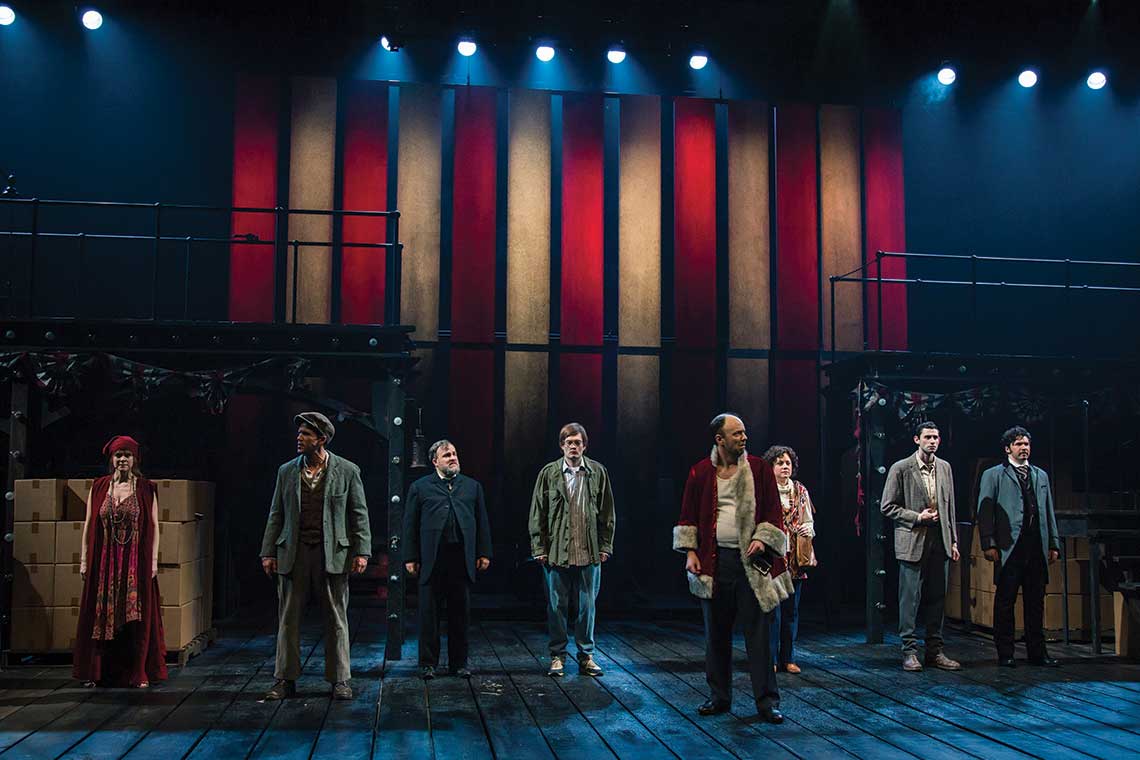 The full company of "Assassins" a co-production of The 5th and ACT. Photo by Tracy Martin

This fall, The 5th Avenue Theatre and ACT Theatre are collaborating on their 10th co-production, Choir Boy, a play with music about sexuality, intersectional identities, and acceptance. The co-production process allows each theatre to access the other’s unique resources and provide Seattle with a more diverse range of musical theatre experiences.

“We have some really delicious, intimate theatres at ACT and The 5th Avenue is a very big space,” ACT Theatre Artistic Director John Langs said. “As Broadway and the rest of the world started to explore smaller, more intimate musicals, there was a feeling that they were getting lost in the big space.”

Bill Berry, the artistic director of The 5th Avenue Theatre, added that co-productions have longer runs than shows produced by The 5th and ACT independently, so they benefit artists as well. “We also talked about the value [of] producing shows with longer runs to the arts ecosystem and the folks working in our community, particularly the performers,” Berry said.

Thus, a partnership began. Since the co-production program’s inception in 2011, the theatres have produced a variety of small-scale contemporary musicals including the two-hander whodunnit comedy Murder for Two and Sondheim’s acclaimed concept musical Assassins.

Rather than dividing responsibilities evenly, each theatre contributes what they have the capacity to offer. “We are a theatre that is smaller than The 5th Avenue, so they have a much larger annual budget,” Langs noted. “We find a mutual understanding about percentages that makes sense to each theatre, and it’s roughly 70/30 split cost, but the productions are made for the most part at ACT.”

Then, the theatres collaborate on curating the material, selecting directors, and casting. “The decisions sometimes take longer to make,” Berry admitted, but he stressed that the organizations “work together on all aspects” of the productions.

When Langs and Berry accepted their positions, they felt that the curation model in place did not serve the greater community of artists and audience members. “We needed to flatten the hierarchy about decision-making, about whose voices were represented onstage,” Langs said. They started having conversations “both internally and externally with a lot more stakeholders about what shows go on the mainstage.”

Recently, someone who has helped cultivate these conversations is Jay Woods, The 5th’s associate artistic director of artist engagement. “I always say that a leader at best is a master weaver of the skills and choices in the room,” Woods said. “From an organizational perspective, that means the artistic leadership [team] must be vigilant in avoiding homogeneity in its staff, in its season, [and] in how it communicates with the world.”

The theatres did not initially realize the impacts of increasing the length of a run. “Each theatre really did not have a lot of experience running shows upwards of 10 weeks of performances, so our first few co-productions involved a lot of learning about taking care of the company,” Berry confessed. “Mistakes were made, and we have integrated better and more mindful practices over the years.”

Choir Boy is a coming-of-age story about Pharus Young, a talented, queer gospel singer at the Charles R. Drew Prep School for Boys. Before ACT and The 5th chose to co-produce the show as a part of their 2022-2023 seasons, ACT had planned to produce it in association with Denver Center Theatre Company in 2020. After that fell through because of the COVID-19 pandemic, ACT considered presenting the play on their own, but the theatre is delighted to be collaborating with The 5th in order to deliver as strong of a production as possible. “The production that we could have done would have been a little more modest, but we loved the play,” Langs stated.

This production of Choir Boy is particularly exciting since it will feature a completely unique version of the text. “The director Jamil Jude has been on a long journey with this play; he was a part of it before it went to Broadway and the script got sort of locked, so he has seen many iterations of it,” Langs said. Jude wanted to include some of the moments that were cut on the show’s road to Broadway, so he received “permission from the playwright to take the pieces that he felt were really powerful and told the story that he wants to tell.”

As the partnership continues, the theatres hope to focus on cultivating new works. “Our real dream is to commission and develop musicals from the ground up as we move forward with the co-production slot in our season,” Berry stated. However, their mission is not exclusively based on producing premieres. “We also want to be sure that we are bringing pieces like Choir Boy to have new productions in Seattle.”

Pharus’ arc in Choir Boy represents the values both theatres wish to emphasize this season. “This season [at ACT] is really about journeys of courage,” Langs said. “The characters in the season really stand up for who they are.” In order to cultivate an environment in which artists and audience members can fully appreciate shows with sensitive subjects like Choir Boy, Langs and the teams at ACT and The 5th make sure all of the theatres’ programs are as inclusive and equitable as possible.

“Remaining open and vulnerable to new ways of thinking is crucial to structurally changing a system that never wanted to invite the ‘skills and choices’ outside of the white-approved tool box,” Woods said. “We need to be brave for one another or we might as well hang it up.”

“I think about equity in terms of making sure that everybody who comes into our space feels like their personhood was thought about before they got here,” Langs explained. “We want to create a safe space to do dangerous work, and that takes a lot of diligence.”

Kyle Gerstel is a 15-year-old musical theatre geek who couldn’t be happier to have found TeenTix in 2020. In addition to writing for the TeenTix Newsroom and his school newspaper The Islander, Kyle frequently performs with Youth Theatre Northwest and works with Penguin Productions to foster an equitable theatre community. When not in rehearsal, you can probably find him writing poetry, rewatching Promising Young Woman or obsessing over Bo Burnham.

This article was written on special assignment for Encore Stages through the TeenTix Press Corps, a teen arts journalism program sponsored by TeenTix, a youth empowerment and arts access nonprofit organization.