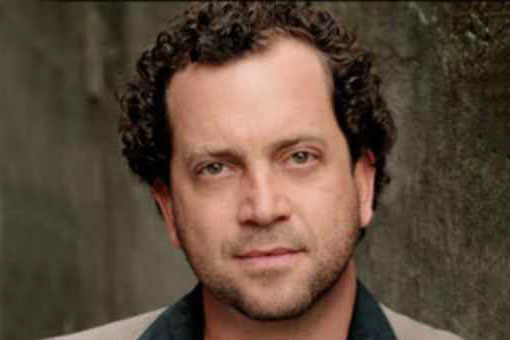 As a fight choreographer, Peter Dylan O’Connor creates plausible onstage violence. Even in a comedy like Twelfth Night (at Seattle Shakespeare through November 16) his goal is to make the audience fear for the characters without fearing for the actors. It’s a craft that combines artistry and physicality with genuine safety concerns.

In addition to the sword-and-dagger business, he also works as an actor, director, scenic designer, photographer, producer and supervisor of the Cornish scene shop, bringing a multi-disciplinary approach to each of these trades. I talked to him about Twelfth Night, fight choreography and his problem-solving approach to theatre.

Could you walk me through the fight choreography process for Twelfth Night?

When Aguecheek fights Viola, neither of them know what they’re doing. They’ve both been told the person they’re fighting is the most amazing fighter in the world, so they’re super-intimidated and they come into it thinking the other person is a much better fighter. That’s the conceit of the play; that comes out of the text. You have to approach this particular storyline from a different place than you would, say, Othello or Henry IV.

We went in early in the rehearsal process, the first week, and very quickly set up what we thought might work. I really had to rely on the actors and say, “Here’s a simple sketch of what we think it might be. You guys go away and flesh out the characters, and then let’s come back and see if it actually works.”

I’m never going to come in with the fight already choreographed. Let’s figure this out organically, right here in the room. What’s your intention? When you say that line, what do you think it means?  I use [the actors] as a platform for the story because they know it better than I do and they know their level of experience better than I do.

What percentage of fight choreography is stylized narrative movement versus portraying realistic violence?

Well, the illusion of violence is the ultimate goal. We want to make sure that the audience is scared when a knife is pulled, or at least that they feel threatened for the character. We want the level of tension in the room to rise.

Of course it’s all a facsimile of reality because it’s the theatre. We’d respond really differently if a gun is pulled at McDonald’s. You expect it at the theatre, but it still has to raise the tension.

In Twelfth Night’s case it’s very stylistic. The mood, the lights, the music, the costumes are all indicative of that. But nowhere did we approach the material as if we wanted it to look like it wasn’t real. We wanted everybody to think they’re really hitting their swords together. It’s just as important, even though the play is stylistic, to make the violence seem real. That raises the stakes for everybody.

Trying to find the illusion of violence is a very different process than actually being violent. When I was a kid I had a really strong temper, and I think that becoming a choreographer was a really effective way of exorcising some of my rage. [Laughs]

What artistic statement can you make within that role? Or are you just subordinate to the needs of the play?

It’s both. You have to pay attention to the needs of the play and what the director wants to do, and you have to bring a set of chops to the table, too. It’s the same as a good sound designer or a good actor.

You do so many other things: photography, directing, acting. You run the scene shop at Cornish.

I’m the shop foreman. I build all the shows that are supported by the production department for the theatre department.

You try to keep students from losing fingers in their time there.

That’s the most important thing, to make sure everyone leaves with all their fingers attached to their bodies.

What’s the craziest thing you’ve had to build there?

I don’t know if it’s the craziest, but it’s the most recent weird thing we had to build. Paul Butraidis is directing a production of Three Sisters at the Cornish Playhouse, and one of the last props that had to be built was a clock that would explode. It had to be safe and look like a clock, and the designer wanted these very geometric forms. Essentially the clock looks like the structure of a Rubik’s Cube. There are all of these cubes attached, and when it blows up the cubes are pieces in various forms, but then it has to be put back together so we can use it for the next show. We ended up using magnets and wood glue and paint to create the illusion.

You’re using an analytic side of your brain there, real nuts and bolts. It’s not just the artistry of it; in that capacity you also have to make things that actually work.

I’d say 90% of the reason why I’m in all of these theatrical elements is because for me, the process is all about problem solving. Whether I have to figure out how to do a comedic fight for Twelfth Night–that’s a set of problems that have to be solved–or whether it’s building a clock that has to explode and come back together.

Next month O’Connor co-directs Theater Anonymous’s It’s a Wonderful Life, a production where nobody knows the cast, including the cast, until the night of the play. Actors rehearse with only the directors, then sit in the theatre and deliver their first line from the audience before joining the rest of the cast onstage. Crazy, huh? Show runs one night only (for obvious reasons) on December 14 at the Cornish Playhouse.