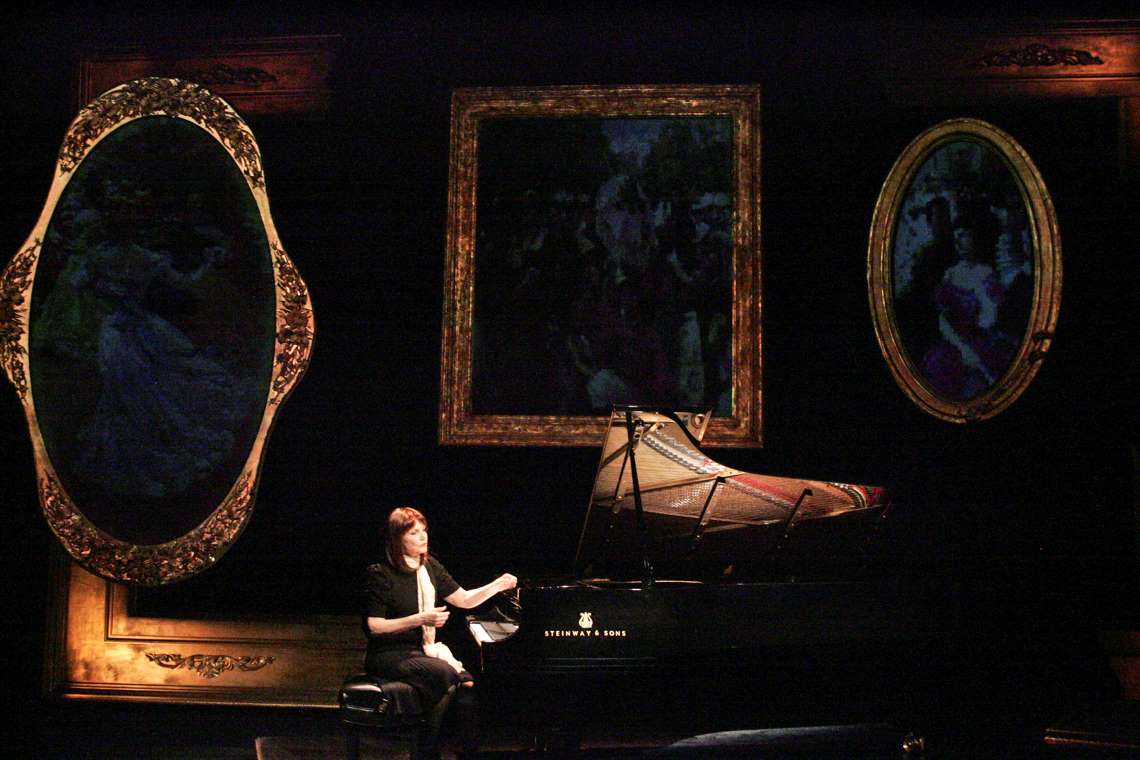 When concert pianist Mona Golabek takes the stage at TheatreWorks Silicon Valley this month, she’ll be stepping into the first role she had as an actor. Golabek has been performing the role of her mother since 2012, premiering The Pianist of Willesden Lane at the Geffen Playhouse in Los Angeles.

“It’s not only the first time, it’ll be the last time,” Golabek said, adding that it’s her mission to share her mother Lisa Jura’s story. It’s a story that captivated her and spoke to her very core. Jura was not only a Jewish survivor of World War II, she was also a pianist whose music provided hope for many displaced children during the war.

I had the pleasure of speaking with the concert pianist and storyteller about her upcoming run in the Bay Area—and how her classical training has informed the way she thinks about the audience.

Danielle Mohlman: When did you first know you wanted to share your mother’s story on stage? How did that come about?

Mona Golabek: About 25 years ago—or maybe it was 30 years ago—I was engaged to play the [Edvard] Grieg Piano Concerto, which is the piece that my mother always dreamed about. And I don’t know what got ahold of me, but I just thought if I could get something out there, I could inspire others with the message of my mother’s story. What happened next was that I set out to write a book called The Children of Willesden Lane. And a lot of people said, “You know, this would make a great performance for the stage.” Because I was going around performing at schools and things. But it wasn’t until my path crossed with Hershey Felder that I had the opportunity to develop it for the stage.

And how long ago was that?

That was about 10 years ago. I saw him perform his Beethoven show and I was just shocked by what a genius he was. So, I asked for some advice and I did a little performance for him. And he was so moved that he decided to take a chance on me.

Do you have a favorite memory of your mother that you’d be willing to share, perhaps one that’s been translated into your performance on stage?

She told me her story while she taught me the piano. And I remember when she pounded out the cadenza of the Grieg Piano Concerto, she told me about how she would go down into the basement when the bombs started.

And she went to her music to give her the strength to get through.

I think the reason this story has such resonance today is because of what we’re seeing in the world with the increasingly horrendous refugee crisis. We need stories that emphasize the good in humanity and the choices that are made—and the courage and conviction.

And in a time when we can hardly admire our leaders…I won’t go down a political path. I don’t ever do that. But it’s quite obvious that we are in a crisis of belief in our leaders. And the division that’s happening—this horrendous rhetoric that divides us—there’s no place for that. We have to fight that.

I know you said that this is the first and last time you’ll ever portray a character—that you’ll take on the role of storyteller, actor and pianist all in one. What has been the biggest challenge of taking on that role?

And I’m sure that applies to your music as well.

Yes. I had great training in the discipline of being a concert pianist. And I brought that discipline and that training to the world of acting and storytelling.

I think it’s so important to, as a performer, be able to say “This is a different audience tonight. They require just as much from me as last night’s audience.”

What are you most looking forward to about bringing The Pianist of Willesden Lane to TheatreWorks—and Silicon Valley?

Well, I understand that it’s an extraordinary community of amazing, passionate theatre-goers. So I’m excited to bring the story to the community there. And obviously it’s a hotspot of the world where brilliant ideas come forth—and the future, in many ways, of technology. I have a really passionate vision and goal to make Willesden Lane a worldwide message. I want this to be rallying cry—to remind us why we’re here and what our purpose on Earth is. So I have this secret fantasy that one of those guys that runs those tech companies will turn up at the show and be moved.

This is an open invitation, then.

Yes. I want it to be known that if they come see Willesden Lane, it will transform their heart.

The Pianist of Willesden Lane by Hershey Felder, adapted from the book The Children of Willesden Lane by Mona Golabek and Lee Cohen, runs January 15 to February 16 at TheatreWorks Silicon Valley at the Mountain View Center for Performing Arts. Tickets are available online or by calling 650.463.1960.