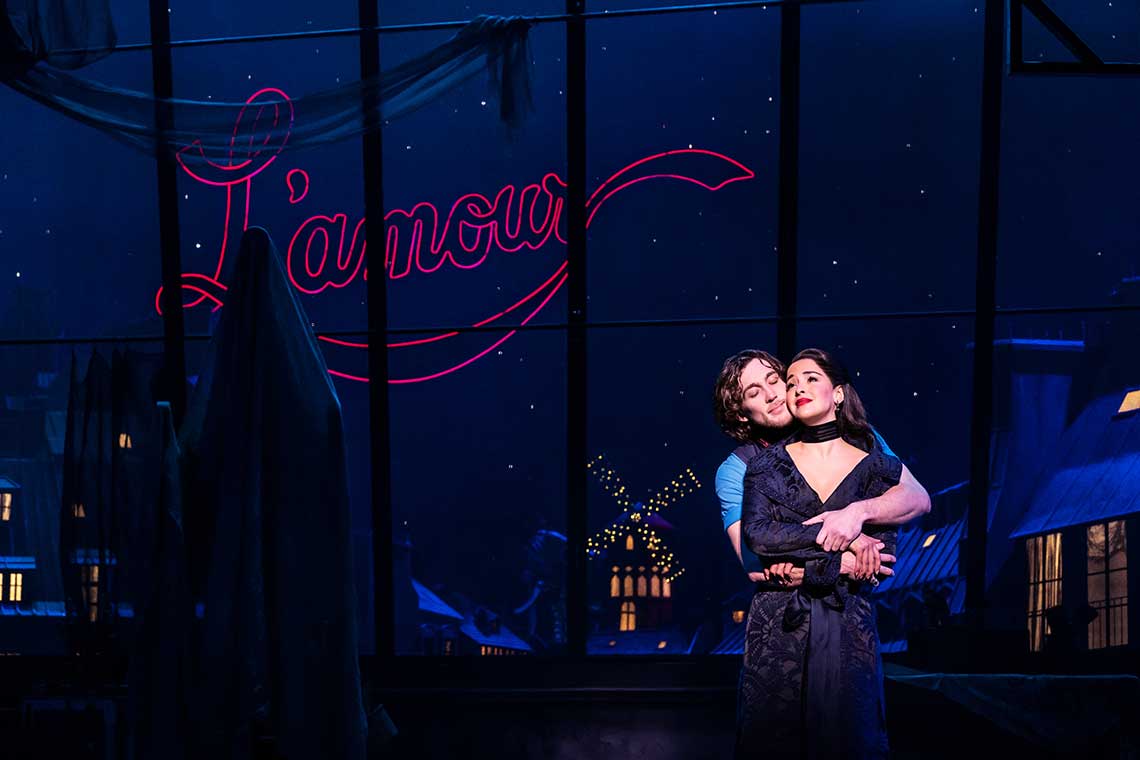 Conor Ryan as Christian and Courtney Reed as Satine in the North American Tour of "Moulin Rouge! The Musical." Photo by Matthew Murphy

Few productions pack visual panache, catchy pop tunes, and unabashed emotion like Moulin Rouge! The Musical. Loosely based on the 2001 Baz Luhrmann movie starring Ewan McGregor and Nicole Kidman, the story was reworked for the musical’s Broadway premiere in 2019 and won 10 Tony Awards.

The North American touring production, which includes 70 songs and is slated to visit nearly two dozen cities, will stop at Seattle’s Paramount Theatre December 14 through January 1 to offer local audiences a uniquely immersive experience filled with romance, drama, and glitz. Conor Ryan portrays Christian, a young Englishman entangled in a tragic love story with the show’s cabaret star Satine. He shared his experiences performing in this epic musical production.

This interview has been edited and condensed for clarity and brevity.

TODD MATTHEWS: This is the first time Moulin Rouge! The Musical will be performed in Seattle. Does that add any pressure to your performance?

CONOR RYAN: Well, for all the cities we’ve been to, it’s the first time the community has seen it in their hometown. I wouldn’t say there is any added pressure. I would lean in the opposite direction and say it’s a real joy to experience a community discovering the show for the first time. Once in a while, you meet audience members who saw it on Broadway. But most of the time, we are blessed with audiences highly anticipating the show because they love the movie but couldn’t get to New York City to see the show. It’s exciting to feel that energy. Some people come to the show dressed in costumes. Some people see the musical five, six, seven, or even 10 times! It’s a gift to be in a show that draws that kind of attention, to be a part of something that so many people love.

Are there differences and similarities between the movie and this touring production?

I’m happy to report all the things audiences love about the movie are still there—scenic elements, popping colors, and high energy. This show was written almost 20 years after the movie was released, so there are nearly two decades of new pop music that the music supervisor and the creative team were able to explore. Not only do we have those classic songs audiences love about the movie, but we’ve also got some Beyoncé, Lady Gaga, and Adele. Those moments in the show are thrilling because audiences aren’t expecting them. For example, I get to sing Adele’s “Rolling in the Deep.” Every time that song starts, the crowd goes crazy because they love it and are not expecting it. Also, the movie is a movie, and the show is a Broadway show. Just by the nature of it being a different art form, it has a different feel. It grabs you differently when you’re physically in the same space as the performers.

Moulin Rouge! is a huge spectacle often described as a “visual feast.” How do you maintain your energy and prepare for that night after night?

I’ve done some demanding roles before, but never quite on this scale and never for this long. Something I’ve struggled with is the “long game.” I’m one of those performers who doesn’t know how to give less than 120 percent every time. It feels good to wring out my soul and leave it all on the floor. But, unfortunately, it’s not the most sustainable way to perform. I’m learning to take as best care of myself as possible. Instead of doing eight shows a week, I do seven. I get a ton of sleep. I drink tons of water. This show is so vocally demanding that sometimes I need to go on complete vocal rest. That’s very difficult for me. I’m incapable of being in any social setting and not talking. It’s about finding balance. It’s a journey.

What appealed to you about the role of Christian?

As soon as I heard they were making a Broadway show, I was manifesting, “Please, put me in that role.” I was always drawn to that character—his love of life and passion for his art. I feel like Christian is not that different from me. It’s one of those roles that fit like a glove.

Have you been able to put your stamp or signature on the character?

The creative team allowed me to bring so much of myself to the role within the show’s structure. They encouraged and supported me in singing the songs my way, unique to my voice, and bringing my raw emotion to the role. I love the journey Christian goes on, even though it ends up being tragic. I love the joys of the first act and all the pain and anguish of the second. I love the experience of going out there and bringing out my soul. I’m drenched in sweat by the end, but it feels so good. It’s a dream come true. Honestly, I feel like the luckiest guy in the world.

Is there one song you look forward to performing every night?

There’s this beautiful duet, “Come What May,” between Satine and Christian. As you said, the show is such a spectacle. It can sometimes be a sensory overload with the lights, orchestration, costumes, and choreography. Don’t get me wrong—it’s all delectable, fabulous, and magnificent. But I look forward to the scene in which Courtney Reed, as Satine, and I sing “Come What May.” I hold her in my arms, look her in the eyes, and for that moment, it feels like we’re alone. It’s not necessarily relaxing, but it’s so pure. It’s the last time the audience gets to indulge in Christian and Satine’s love before things get complicated.

Is there anything else you would like to share with audiences about your experience with this show?

No one escaped the pandemic and its effect on our planet and society. The experience of Moulin Rouge! and live theatre truly feels like a gift. For two years, my self-esteem took a hit after being labeled “non-essential.” After being unemployed for so long, it feels like live theatre—and this show in particular—is as essential as ever. People leave the show feeling moved and connected. I’m so grateful that I get to re-emerge from the pandemic in such a meaningful way. Audiences communicate back to me—either at the end of the show at the stage door, on social media, or during the bows at curtain call—that we make a difference in the world. It never gets old to hear that.

Moulin Rouge! The Musical will play at The Paramount Theatre from December 14, 2022 to January 1, 2023. Tickets are available online.

Todd Matthews is a Seattle-based writer, editor, and journalist whose work has appeared in Earshot Jazz, HistoryLink, Real Change, Seattle magazine, and other publications in print and online over the past 25 years. A graduate of the University of Washington and the author of three non-fiction books, he has earned four awards from the Society of Professional Journalists.