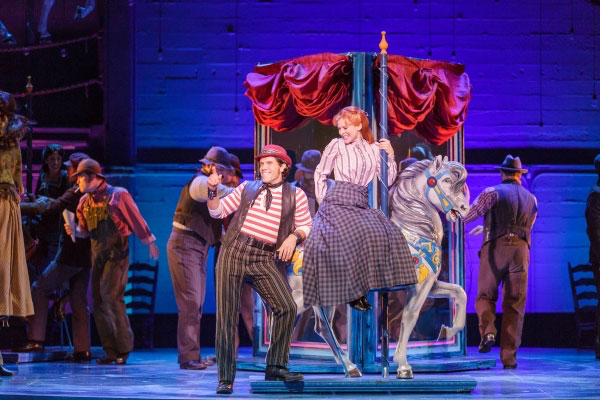 Carousel was the first play I ever saw. It was 1985, give or take. I would’ve been seven or eight. It was a local production, staged by a volunteer cast at the Warehouse Theater, a much-loved little black box in the middle of a park in Yakima. I don’t remember much. I enjoyed it without following the story in any substantive way. I fixated on the props, the dust swirling in the spotlights, the not-quite imperceptible movements of the backstage machinery. One of my classmates was in the cast. I remember thinking he was an amazingly good dancer. You don’t generally see your friends dance much in elementary school.

So I was really looking forward to seeing the 5thh Avenue Theater’s new take on the famous Rodgers and Hammerstein musical. My idea was to compare and contrast my impressions of the material as a child and from a 30-year vantage point. And boy oh boy, it was much, much different than I remembered. For a viewer in 2015, it can be quite shocking. I was not expecting that at all.

Before I continue following that thread, I would first like to stress that this is a wonderfully staged production, filled with ingenious, spartan set design, an immensely talented cast and terrific musical numbers. It’s a thrilling and faithful adaptation of a genuine classic. That faithfulness, however, could be a sticking point for some.

Carousel takes place in a maritime community in late 19th century Maine and centers on the romantic misadventures of a group of lower-class young women who work at a mill. At the heart of the story is the relationship between Julie Jordan and carnival barker Billy Bigelow. They share a lovely courtship scene in the first act, which eventually leads to marriage and pregnancy.  At this point, about a third of the way through, Billy becomes abusive and the tone abruptly shifts. The show becomes much darker for reasons both intended and unintended by its creators when it first premiered in 1945.

Alcoholism, poverty, attempted murder and suicide are disturbing plot points no matter the era, but the gender dynamics are what makes Carousel particularly disconcerting. These sorts of generational differences pop up whenever I watch old movies (if you like watching the classics, you have to get used to seeing men grabbing women and leading them around by their arms like it’s completely normal), but because Carousel is a story almost exclusively about sex and the interplay between genders, it’s a buzzer that goes off constantly. Much of the time it can be chalked up as quaint and funny; in the blazing central musical number “June is Bustin’ Out All Over”—a tribute to seasonal horniness—the line “girls ain’t even putting up a fight!” is particularly telling of the time it was written.

Other times it’s brutal, as in the script’s treatment of domestic abuse. What I found most surprising was the story’s absolution of an unrepentant wife beater (“It’s possible, dear, for someone to hit you, hit you hard—and it not hurt at all”). It’s a narrative choice that’s nearly impossible to imagine today—or even 30 years ago. There’s no redemption for Jake LaMotta in Raging Bull. It’s a line that characters do not easily get to come back from once crossed.

This may not have been the case in 1945 for Richard Rodgers and Oscar Hammerstein. I wondered how much of my reaction arose from my exposure to modern attitudes about gender equity, feminism and patriarchy. Was it somewhat new to have this kind of reaction to the classic musical? Had things changed so much during my own lifetime?

“Oh, I couldn’t believe how dark it was,” my mother Cecilia Vogt recalled over the phone. “You go in thinking, ‘This is a great play to take our kids to,’ and you go out thinking, ‘Oh my god, this is dark!’” She was just as rattled by the play in 1985 as I was in 2005. I don’t remember her having this reaction, but perhaps this is not the sort of thing a mother usually wants to talk about with her preadolescent child. All I remember is for weeks afterwards, she’d run around the house singing “JUUNE IS A BUSTIN’ OUT ALL OOOOVEEER.” Especially when I had friends over.

One of the greatest things about watching a 70-year-old play live on stage is being confronted with the evolution of social attitudes, face to face with real people. It’s far less soothingly alien than watching, say, Gone With the Wind, and seeing dead people say horrible, antiquated things through the haze of time. It forces you to confront these troubling issues in a much more immediate way. The words aren’t preserved in amber—they’re coming from the mouths of real people, as they did in 1945. As my mom puts it, “Maybe that’s the benefit: it makes you think about these awful things in our culture that haven’t really gone away.”

I know a lot of people who refuse to watch Gone With the Wind because they see it as racist and hateful. It certainly is those things, but it’s also gorgeously shot, lightning-paced for a 26-hour long movie (give or take) and an absolutely essential part of our history, cinematic and otherwise. I think that, if anything, we should watch these kinds of things more often. It’s okay to be uncomfortable. That’s often how history feels when we don’t look at it through the lens of hindsight. Gone With the Wind was the biggest box office hit in the history of the United States. It’s where we came from. It’s beautiful and ugly. It’s who we are. Our past does not always have to be glorious to be acknowledged.

After the standing ovation and the curtain call, the audience at Carousel was clearly buzzed. I looked over at my friend Sarah, who had been kind enough to accompany me. She was applauding and shaking her head, dumbfounded. “The play was filled with unlovable characters, but they were played so well by such talented people that I was filled with confusion and frustration and yet admiration for the actors,” she told me later. “I didn’t know how to hold these things inside at the same time.”

It was a peculiar kind of excitement. The feeling you get from being provoked and entertained in equal measure.

I’m grateful that the 5thh Avenue Theater has decided to give us a faithful adaptation of Carousel,without watering down or clipping the queasier parts. It made for one of the most memorable nights of theater I’ll ever experience. As Sarah and I walked out of the theater, we had so much to say. We could’ve talked for hours. As evidenced by the din of exited conversation among the crowd pressing around us as we all streamed out onto the street, we weren’t the only ones. I still can’t stop thinking about it. And I can’t stop singing “June Is A-Bustin’ Out All Over” around the house.