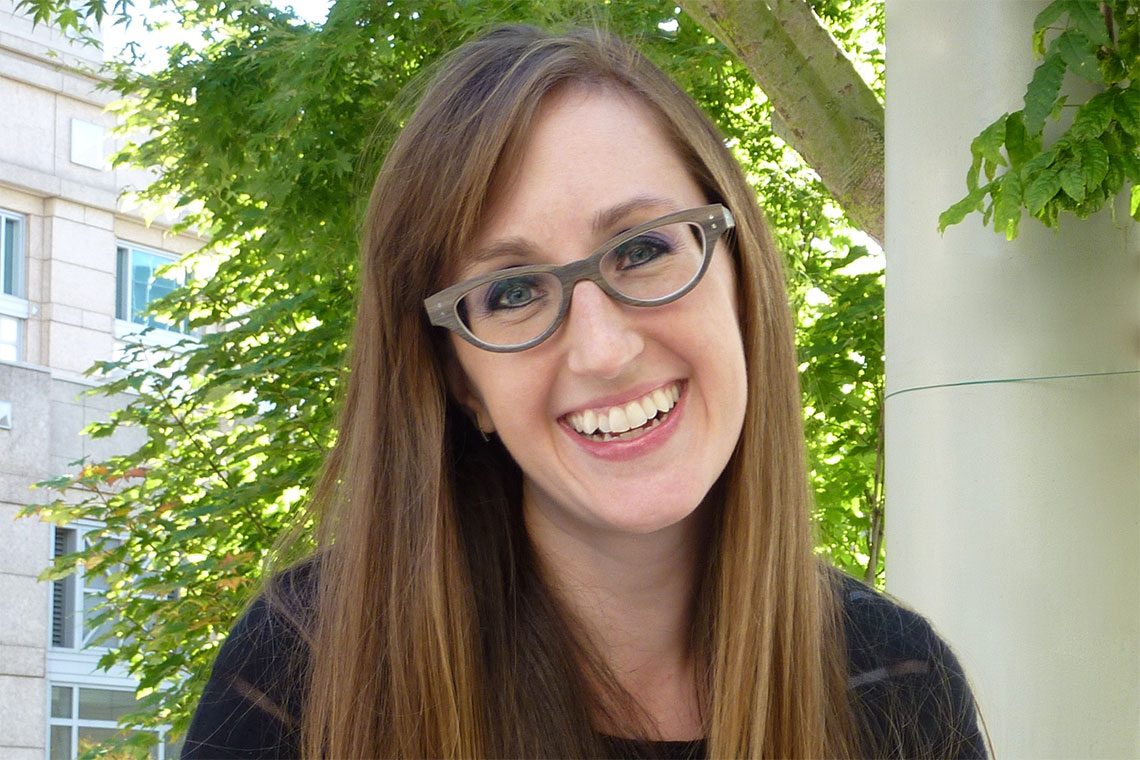 Last spring the Seattle Symphony launched a new label, Seattle Symphony Media, to release their own recordings with a greater degree of creative and financial control. They’ve since put out four albums, with plenty more in the vault awaiting release–they’ve recorded every performance since Benaroya opened in 1998.

The first thing you notice about the albums is their striking cover designs. A vivid departure from the genre’s norm, they feature brightly-colored photographic details of graffiti and other painted, manmade surfaces. The effect is abstractly expressionistic, in the manner of color field paintings. On closer inspection, the planes of color reveal microcosmic texture and detail, with lines extending beyond the frame and suggesting broader movements. It’s smartly evocative packaging for a forward-thinking symphony.

I was curious about this marriage of classical music and contemporary aesthetics, so I talked to the designer responsible: Jessica Forsythe, Art Director of the Seattle Symphony’s sales and marketing department.

It’s got to be difficult to interpret classical music visually.

I found that using these paintings and photographs was the best way to interpret it. If you look at a lot of classical music, the [album] art is always nature landscapes, and I find that harder to relate to than an abstract painting.

Or else it’s a stodgy portrait of the composer—

Yeah. That doesn’t really evoke any sort of mood.

You’ve shifted the focus from nature and pastoral scenes to the manmade world.

When we were launching the label, we wanted to have our artistic statement with the music be in line with the packaging, making sure that they spoke to each other. We have the Dutilleux and the Ravel and a lot of pieces that other organizations don’t really put out there, so we wanted to make sure that we were making a bold statement on both the musical side and the artistic side.

The fonts and layouts have a contemporary feel. You don’t see any serifs, it’s streamlined.

We want it to speak to the more current audience. It’s in line with our whole approach.

Part of my process is to get early recordings from our sound engineer, and I’ll just sit and listen to them while I’m working on other projects. I listen for what mood it invokes in me. I have something called synesthesia, in which you actually see color when you hear music, so I use that to my advantage.

I’d imagine that would be a superpower for a designer!

It is kind of a superpower!

So these are the colors you perceive as you’re listening to the music?

Yes. I’ll listen and distill the music and get a real sense of what colors I feel it is. It’s gotten to the point where I’ll do one mockup and show it to our Executive Director and he’s like, “That’s it! That’s exactly that piece!”

Do you think other people with synesthesia see the same colors as you do?

I don’t know. It’d be interesting to find out. I’ve had this conversation with others and they’re like, “Yeah! Middle C is blue or orange!”

Looks like I talked to the right person about classical music album design.

It’s been pretty fun for me on a personal level. I’m looking forward to doing the upcoming ones.